Shares of PLUG jumped 8.3% Tuesday after the company restated its earnings.

Marsh said he takes his company's accounting irregularities very seriously and they've been working very closely with their auditors and the SEC to implement all of the recommended changes. As of Tuesday, all of their earnings have been restated with minimal changes.

When asked about their business, Marsh said the future remains bright and they continue to work with great customers like Amazon (AMZN) and Walmart (WMT) . They look forward to federal loan guarantees to help them complete two green hydrogen facilities by the end of 2022 and they have three more locations planned.

We looked at the charts of PLUG back on April 12 and wrote that "The charts of PLUG are still bearish and pointed lower. A test and break of the 200-day moving average line is likely in the near-term. Continue to avoid the long side."

In this updated daily Japanese candlestick chart of PLUG, below, we can see that prices did in fact break the 200-day moving average line. Prices are trading below both the 50-day and the 200-day lines and we could see a bearish dead or death cross of these two averages.

The On-Balance-Volume (OBV) line has drifted lower from early February telling us that sellers of PLUG have been more aggressive. In recent days the OBV line shows some improvement. We'll have to see how long that goes on.

The Moving Average Convergence Divergence (MACD) oscillator has shown some improvement from late March but it is still well below the zero line and a buy signal.

In this weekly Japanese candlestick chart of PLUG, below, we see some modest improvement. Last week we saw a possible bullish hammer pattern and this week we are hopefully getting the confirmation. A bottom reversal like the hammer can mean a reversal from down to up but it can also mean a change in trend from down to sideways.

The weekly OBV line shows some improvement from early April and the MACD oscillator is below the zero line but showing some narrowing.

In this daily Point and Figure chart of PLUG, below, we can see a potential upside price target in the $32-$33 area.

In this weekly close only Point and Figure chart of PLUG, below, we can see that the software is projecting a tentative downside price target of only $1.00. A bit drastic in my opinion. 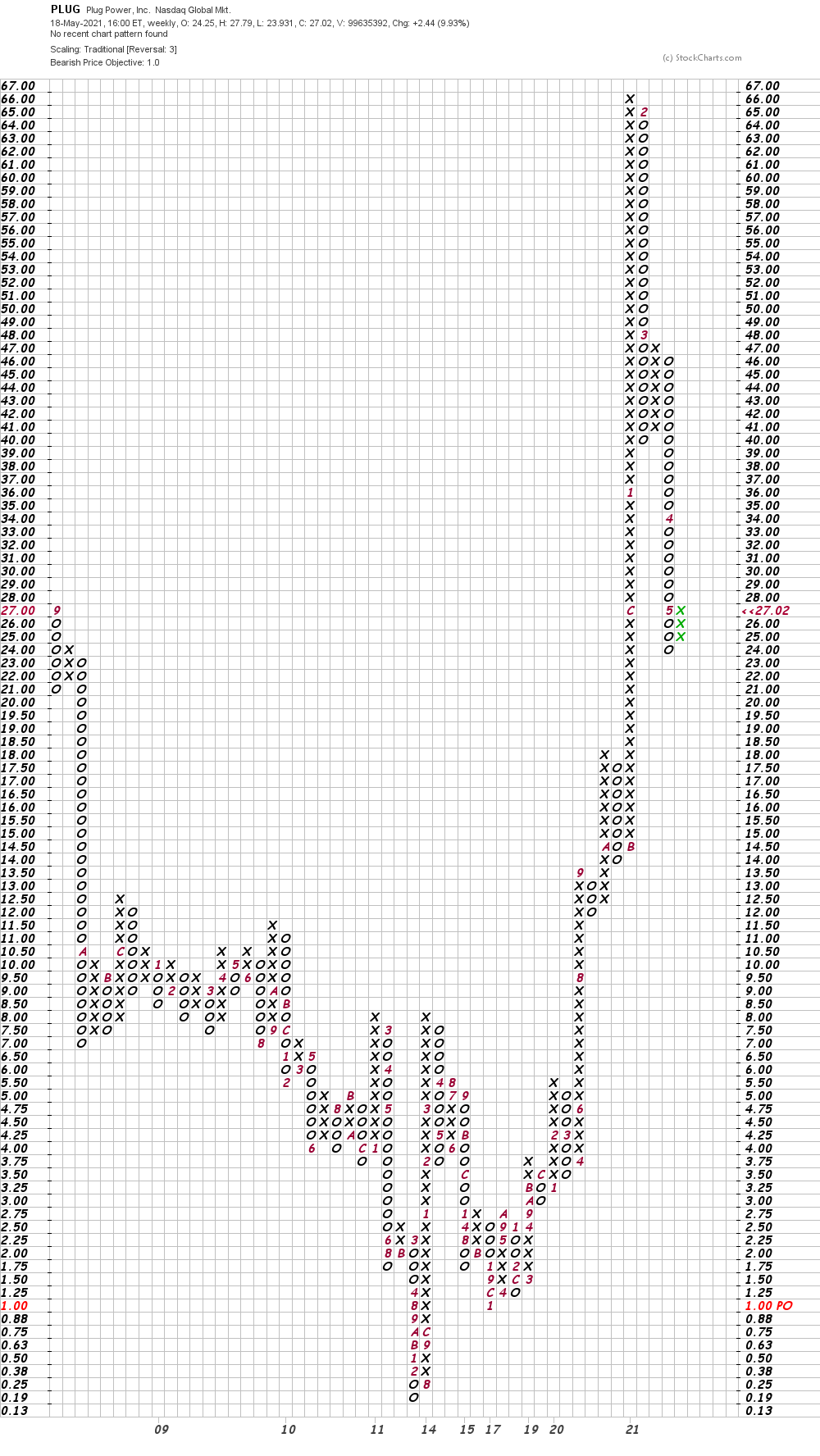 Bottom line strategy: In this current "unsettled" stock market environment and rotation I would not rush into a new long position in PLUG. Let's wait and see if we get a retest of the early May low and if traders defend the level.

(Amazon and Walmart are holdings in Jim Cramer's Action Alerts PLUS member club. Want to be alerted before Jim Cramer buys or sells these stocks? Learn more now.)

Get an email alert each time I write an article for Real Money. Click the "+Follow" next to my byline to this article.
TAGS: Investing | Markets | Stocks | Technical Analysis | Trading | Energy | Technology | Transportation | Mad Money | Executive Interview