Surely you saw the news this morning. Apparently, retail giant Walmart (WMT) has agreed to purchase "green" hydrogen from Plug Power (PLUG) to power the firm's forklifts in operation across Walmart's network of facilities and distribution centers. The agreement is to supply Walmart with up to 20 tons of liquid green hydrogen per day to fuel up to 9,500 lift trucks or "forklifts" in one huge step toward Walmart's goal of eliminating all greenhouse gas emissions by the year 2040.

One thing you probably don't know about me is that I am a weirdo. (Bet you knew that.) I love forklifts. Always have. Operating a forklift is kind of difficult, moving in and about tight spaces, and kind of fun. Ever play blocks as a kid? Kind of like stacking refrigerators in the civilian world, or Conex trailers in the military world. It's interesting work. Yes, I have held both military and civilian forklift operator's licenses in my days.

What got me thinking about PLUG this morning when I heard this news was that Plug Power has a long-time relationship with Walmart. Plug Power provided Walmart with a 50 hydrogen fuel cell run pilot fleet of forklifts back in 2012 that grew into the 9,500 forklifts mentioned above. Plug Power has existing relationships with Amazon (AMZN) , Home Depot (HD) , Nike (NKE) , Stellantis (STLA) , and Southern Company (SO) , among others. Maybe Walmart is an early adopter? Maybe anyone operating a warehouse environment, especially those where there already exists a provider/client relationship gets to where Walmart already is on replacing conventional batteries and sources of power.

Over the past year, Plug Power has...

On March 30th, 2021, announced plans to open a green hydrogen production plant in south-central Pennsylvania with Brookfield Renewable Partners. Construction was to start Q1 2022, with the plant operational by late 2022.

On August 10th, 2021, announced the breaking of ground on an $84M plant in Camden County, Georgia. This plant will be able to produce 15 tons of liquid green hydrogen per day, and is expected to open at some point this year.

On September 14th, 2021, announced the expansion of current operations with a European continental headquarters in Germany. The facility is expected to open in 2022.

On September 20th, 2021, announced plans to build a new facility in Fresno County, California. This plant will be able to produce 30 metric tons of liquid green hydrogen per day and will serve the West Coast of the US and Canada once operational in 2024.

On February 7th, 2022, passed regulatory hurdles in order to build a 350K square foot facility in the Albany, New York area. Ground was broken for this project in March.

Plug Power is expected to go to the tape with the firm's first quarter results in late May. Readers may recall that PLUG posted disappointing results for their fourth quarter, beating Wall Street on revenue generation, but falling well short of both expectations and profitability for that period. For the current quarter, a consensus of over 20 analysts that cover the stock see an EPS loss of $0.15 - within a range spanning from a loss of $0.23 to $0.06 - on revenue of $148M, which would be sales growth of 101%. The range for revenue spans from $108M to $185M.

Obviously, Plug Power is not free cash flow positive. For the most recent quarter, cash from operations landed at $-9.7M, negative for a fourth consecutive quarter. Cash from investing turned negative, while cash from financing turned positive, slightly. Free cash flow per share amounted to $-0.16.

That said, the quality of the balance sheet may surprise the average investor. PLUG ended the fourth quarter with a net cash position of $3.869B, placing current assets at $4.448B. Current liabilities amount to just $420M, which is how PLUG winds up with an incredible current ratio of 10.6. Healthy? That number is so healthy, one must ask if something is wrong. Plug Power will have no problem paying their bills for a good while.

Total assets add up to $5.95B with very little reliance upon "goodwill" or "other intangibles'' The total assets number is a tangible number. Total liabilities less equity runs at $1.344B, of which $504M is long-term debt. The firm could wipe that out several times over, and do so out of pocket.

Negatives? Cash burn. We've discussed that. No dividend. What did you expect? As of the end of this past March, 11.38% of the float were held in short positions... or is that a positive. The firm has had accounting troubles in the recent past. That's why Plug Power fired KPMG as the firm's accountant little over a month ago, and having to restate several years of financial results. Then again, that's probably why PLUG was up 7% in pre-opening Tuesday trade after trading above $32 just a couple of weeks ago and above $46 back in November.

There is no doubt in my mind that the firm is growing its business, and expects to keep doing so. PLUG has a number of high volume clients and that could be huge going forward. This is a strictly speculative name and this market environment has not been kind of late to companies that can grow sales but not do so profitably. Once we are all okay with the risk, because the risk is real, we can proceed. 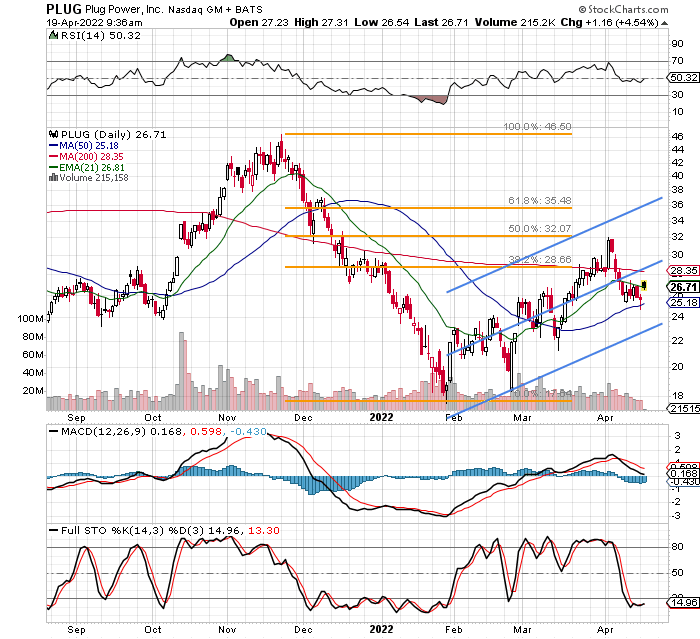 Readers will note that PLUG retraced a precise 50% of the November through late January's selloff in early April before hitting resistance. Even with this morning's pop, Relative Strength is weak, the daily MACD continues to slope downward, while the Full Stochastics Oscillator sits in the corner crying uncle.

The stock has found support at its 50 day SMA and has retaken its 21 day EMA early today. We'll see if that holds. Understanding that this is risky, I think I am okay scaling into this name with an eye on a number for huge corporations operating tens of thousands of forklifts in the aggregate potentially following Walmart's lead.

(Walmart and Amazon are holdings in the Action Alerts PLUS member club. Want to be alerted before AAP buys or sells these stocks? Learn more now.)

Get an email alert each time I write an article for Real Money. Click the "+Follow" next to my byline to this article.
TAGS: Investing | Stocks | Technical Analysis | Trading | Energy | Industrials