Guess it could have been worse? I had been long both Plug Power (PLUG) and FuelCell Energy (FCEL) well ahead of earnings season. Feeling I was overexposed, I rid myself of Plug Power more than a month ago. Unfortunately, I hung onto my shares of FCEL, though I have been working on my net basis. The entire Renewable Energy Equipment had been a market leader in January... and a badly lagging market dog in February. PLUG posted fourth quarter results on February 25th. Awful does not come close to properly describing the numbers. An adjusted loss many times larger than what had been expected. Revenue badly impacted by non-cash charges related to the accelerated vesting of a customer program regarding existing warrants. What? Don't bother. It gets worse.

Just an FYI, FuelCell Energy would also post a nasty miss for quarterly expectations just yesterday (Tuesday) morning. Then three of California's public utilities proposed changes to the state's rooftop solar power program that put the entire group under pressure. No, hydrogen based fuel cells (which is what PLUG and FCEL do) have nothing to do with solar panels, but in this age, all you have to do is be in the same basket, and solar power companies such as Sunrun (RUN) , Sunnova (NOVA) , and SunPower (SPWR) , are all in the same great big "green" basket are those developing or providing cleaner ways to power vehicles such as forklifts. Let the beat-downs commence.

It Does Get Worse!

Late Tuesday, after the close of business, news circulated. Plug Power traded much lower overnight after announcing that previously issued financial statements for FY 2018 and FY 2019, and for all quarterly periods that would include should no longer be counted on as accurate due to errors in accounting. The company will have to restate all financial results for the periods mentioned. The firm was also unable to file its Form 10-K for 2020 by the March 16th deadline.

Plug Power states that the errors primarily relate to reported book value of right of use assets and related finance obligations, loss accruals for certain contracts, impairment of certain long-lived assets, and also classification of certain expenses previously included in research and development costs. Need some good news? The firm does not expect any of the necessary revisions to impact its net cash balance, or the economics of existing or future commercial arrangements.

This morning, I noticed four "five star" analysts as rated at TipRanks come out in defense of Plug Power. Eric Stine at Craig-Hallum increased his target price from $49 to $88. Christopher Souther at B. Riley Financial, Craig Irwin at Roth Capital, and Jeff Osborne at Cowen all in one way or another described this morning's weakness in the shares as a "buying opportunity."

You trust these guys? I mean they are all highly rated and good at their jobs. That said, what fundamentals are they basing this "buying opportunity" on? The company literally just told you that they have to redo their results. I am not saying you should not buy Plug Power here, and I'm not saying that I won't. I am saying that just buying PLUG because it is a green energy name is not a good enough reason. Until we know more, this name is purely speculative. 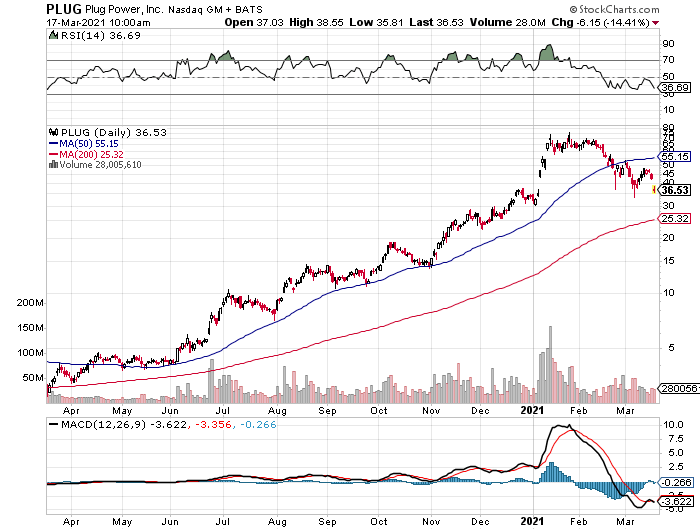 Buy it here? Might work. Works its way toward the 200 day SMA, which would still be a haircut of another 30%? That would not surprise me at all. Know what? I am already in FCEL, so I can be in a money losing hydrogen fuel cell operation without the overhang of ongoing restatements related to past accounting errors. June PLUG $20 puts are still paying close to a buck this morning. Maybe, and I mean maybe... I'll make that sale. Listening to five star analysts going out on a limb while being unable to really do what the analysis that get paid to do? No, I don't need to do that. This is my money. I pay myself to not be reckless.

Get an email alert each time I write an article for Real Money. Click the "+Follow" next to my byline to this article.
TAGS: Earnings | Investing | Markets | Stocks | Technical Analysis | Trading | Energy