For his final "Executive Decision" segment of Mad Money Tuesday evening, Jim Cramer checked in Andy Marsh, president and CEO of Plug Power (PLUG) , the fuel cell technology maker with shares that have more than doubled since May.

Marsh started off by saying that as the pandemic set in and consumers began buying everything online, 45% of internet retail flows through warehouses that use Plug Power's fuel cell forklifts and other products. He said their customers wanted a solution that was carbon neutral and Plug Power has delivered for companies.

Marsh said he's a big fan of Tesla's (TSLA) Elon Musk, who has referred to fuel cells as "fool's cells," but noted that fuel cells are a tenth the size of lithium batteries and are lighter as well, making them a better solution for certain types of vehicles. If you're a package delivery company, would you rather carry batteries or packages, he asked?

Finally, when asked about PLUG's wildly trading stock, Marsh said he's had many talks in recent weeks with institutional investors, which are not typical of the speculators and day traders Plug Power's stock has typically attracted. Let's take a look at the stock price.

In this daily bar chart of PLUG, below, we can see that prices more than tripled in the short time from the March low. The volume pattern is different from many of the stocks I have been following in recent months. You can see increasing volume from November into February, telling us that traders and maybe investors were moving into the stock as it was on its way to a double. Prices turned lower in the second half of February and prices were halved before renewed buying came in as the broad market bottomed.

The On-Balance-Volume (OBV) line declined in late February but made a higher low in March telling me that forward looking traders were more aggressive buyers in March. The OBV line has moved up sharply into July as more attention has been attracted. The Moving Average Convergence Divergence (MACD) oscillator has crossed to the downside for a take profits sell signal. 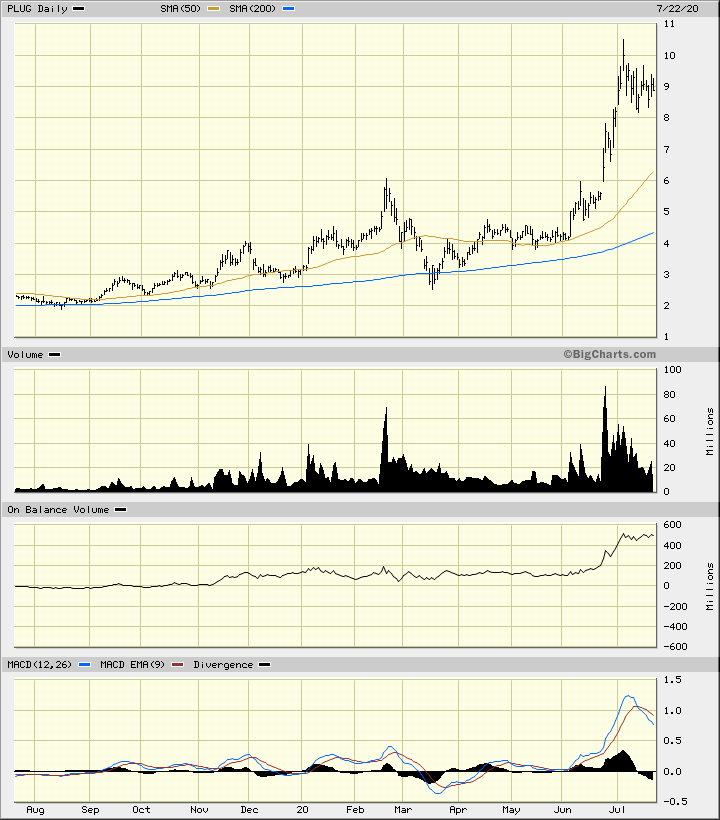 In this weekly Japanese candlestick chart of PLUG, below, we can see that prices have made a potential long base around $2. There is nothing really wrong with a base at $2 except for the issue that most institutional players would not position a stock below $5. Fundamental analysts would probably not spend much time with a low priced stock either. That kind of leaves smaller speculators who hope to hit a home run.

Prices are above the rising 40-week moving average line but I would consider prices extended. The weekly candlestick patterns show potential reversals which could mean a shift from up to sideways or up to down. The volume is not constructive during the long base and the OBV line actually declines.

The OBV line does not really turn higher in a sustained fashion until March. The 12-week momentum study is still positive but close to making a "lower bar" which can signal a peak in upside momentum. 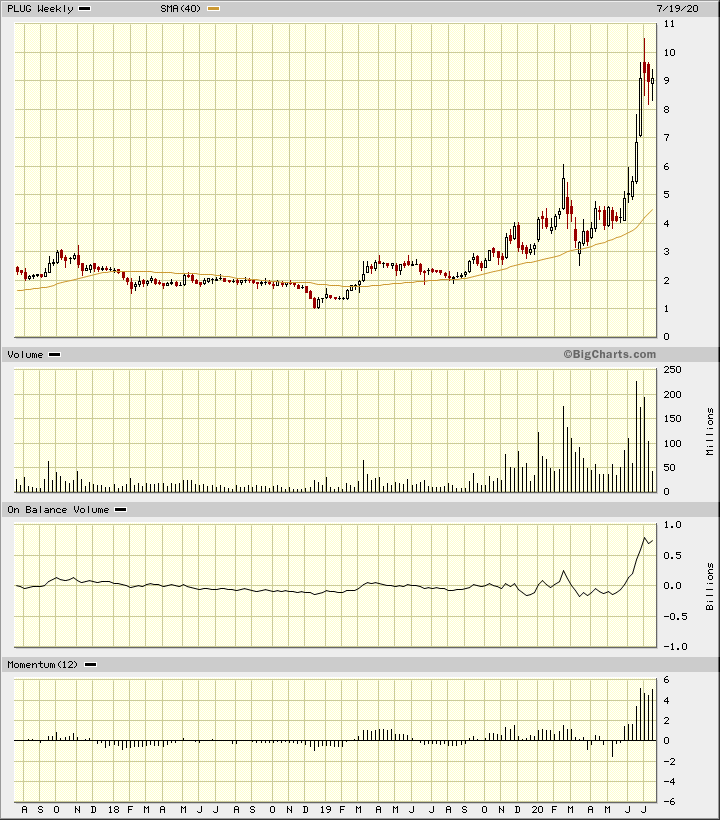 In this Point and Figure chart of PLUG, below, we can see a potential upside price target of $11.50, but we can also see that a decline below $8.50 is not likely to find much in the way of support.

Bottom line strategy: Here is my dilemma. Prices are in an uptrend but extended. Prices show a big base pattern with bullish volume in recent months. We could trade up to $11.50 and maybe a lot higher but a move below $8.50 would be my risk point. With so many stocks that we can trade I do not feel really compelled to jump in on the long side of PLUG.

Get an email alert each time I write an article for Real Money. Click the "+Follow" next to my byline to this article.
TAGS: Investing | Stocks | Technical Analysis | Trading | Energy | Technology | Electric Vehicles