For what? To jump on board the speeding freight train that is Roku (ROKU) . Maybe.

The fact is that I have been in and out of this name so often, that I imagine that I could have done a lot better had I just bought a few shares and then forgotten about the position. So maybe I'm not the best one to opine on this name. That said, I am still thinking about it, and there's a 90% chance that by the end of this piece, I will probably opine. That said, pull up your boots, fill both canteens, put some dry socks in a plastic back, and then put them in your pack. Now, you're ready. Let's go.

Past To Present... Accelerated

There's no need to go into ancient history. The stock had been volatile, but in a perverse way, range bound for about a year until the breakout really started in earnest late this past summer. The stock had never been a money maker throughout its corporate history, that until the most recent period, ending in September, reported in early November. Aided by pandemic living conditions, the firm posted a positive number for EPS (the real kind, not adjusted) that easily beat expectations and revenue that also beat, while growing 73% year over year.

There is no doubt that streaming devices of this kind have become popular. We still have cable in our home. We also have TV's in our home not hooked up to cable, but to a device competitive to Roku, but similar in what it does for you. We have the Amazon (AMZN) Fire Stick. I find myself in front of those TV's more often than the one still hooked up to cable. That one is really only good for local news.

On top of streaming entertainment, even live national news and sports are broadcast over the internet these days as much as over any other medium such as the already mentioned cable or for the inner Neanderthal... over the air. The pandemic, by virtue of forcing individuals stuck in one place to seek increased and new libraries of both serial and cinematic entertainment, has probably forced this transition from the "cable" box to the "streaming" box a couple of years forward of where it might have been otherwise.

Last week, AT&T (T) finally reached a deal with Amazon to carry HBO Max, with rumors rampant that a similar agreement would soon be reached with Roku. As if AT&T held the upper hand by withholding its product from services already carrying Apple (AAPL) TV, Netflix (NFLX) , Disney (DIS) Plus and more. That was silliness, but did create some minor consolidation in that the share price of ROKU turned into a Thursday and Friday pop.

Opinion started turning. Last Thursday, highly rated Jeffrey Wlodarczak of Pivotal Research Group, a noted ROKU bear, finally upgraded the shares to "Hold" from "Sell", referring to the pandemic tailwinds and the "inevitable decline" of legacy television. Pivotal upped the firm's target price to $240, which is still below the last sale, but they raised that number all the way from $75. Ouch.

Fast forward to Monday (this) morning. Another highly rated analyst gets more aggressive. The truly top-notch Laura Martin at Needham maintained her "Buy" rating, while taking her target price from $255 all the way to $315. Martin mentioned how the rapid shift toward this kind of entertainment enforced by demographic shifts in who is leading this evolution is forcing advertisers to adjust how and where they spend those budgets.

How To Play Catch Up 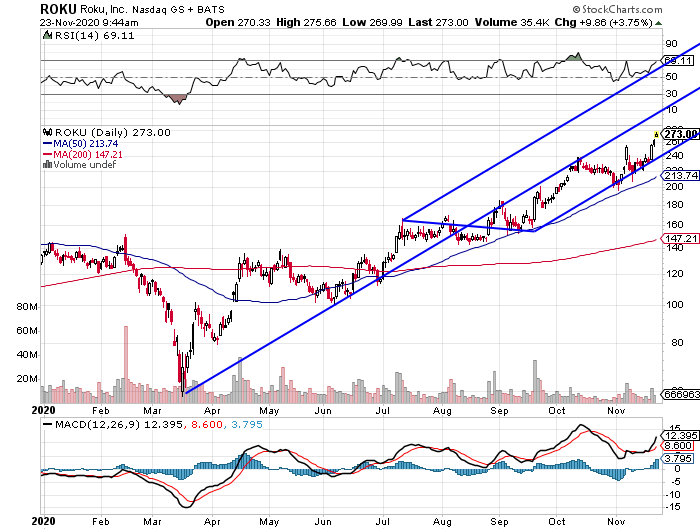 Dating back to the early pandemic lows, ROKU trades still in the lower chamber of our old friend, the Pitchfork model. Can it go higher? There will be resistance probably soon enough on top of this now three day spike. Not that I would necessarily pay $273 for something that I could have paid $240 for just a few days ago, but I might sell the right to put the shares to me at that $240 level to someone else while I wait for the shares to come in at some point.

Shortly after the opening bell, one could still write (sell) ROKU $240 puts expiring this Friday for more than $0.90. I know that if that's still there once this is published, I am so writing those. Want to get crazy? The December 31st $240 puts are still paying a rough $10. Now that gets me a little fired up, even if it is risky. Rock and roll.

(Amazon, Apple, and Disney are holdings in Jim Cramer's Action Alerts PLUS member club. Want to be alerted before Jim Cramer buys or sells these stocks? Learn more now.)

Get an email alert each time I write an article for Real Money. Click the "+Follow" next to my byline to this article.
TAGS: Investing | Stocks | Technical Analysis | Trading | Television Production/Distribution