I'll admit it, I love what the guys at Roundhill Investments are doing. The principles are listing to traders. They are eyeing the market for niche opportunities that have a void. Their first ETF was (NERD) , the Roundhill Bitkraft eSports and Digital Entertainment ETF. Their newest addition debuted today: the Roundhill Sports Betting and iGaming ETF, ticker symbol (BETZ).

If you don't respect them for anything else, you have to give them props on genius use of ticker symbols.

I've written about NERD before, and believe it to be an underappreciated ETF and way to play eSports. I see a lot of similar qualities with BETZ. The most vital aspect around both ETFs is the ability to gain access to names that trade outside of the United States.

BETZ logically holds DraftKings (DKNG) in the top spot with Penn National Gaming (PENN) in the top 10. Penn likely only got there because of their purchase of Barstool Sports. Score another win for Dave Portnoy. Is there anything Barstool Presidente can't do? But I digress.

For those who have found their way to the momentum excitement offered by the sportsbook and eSports gambling names, they likely recognize Gan (GAN) as well in the top 10. Some of you here have "Rev Shark" to thank on that one; however, it's not likely most traders, at least in the U.S., recognize any other name. Maybe one, at best. Here's a quick glance at the geographical breakdown. 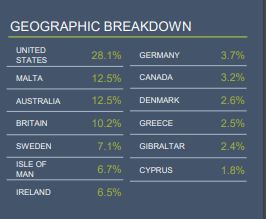 While the individual names will offer the largest upside, if you aren't an aggressive and active trader, BETZ offers a solid alternative for exposure to the sector. In fact, I prefer the idea of this being a core with some trading around an individual name like DraftKings, Gan, or Penn National Gaming.

The market cap breakdown skew small-cap with 40% of the ETF there, but one-third is mid-cap, and 26% large-cap, so there's a nice diversity there. Check out the theme breakdown as well. Again, some diversity.

The expense ratio of 0.75% is very reasonable, especially given the reach outside of the United States. The ETF is new, so trading will be thin. Folks can't use market orders to enter yet. There are no options yet, but a decent chance we'll see them in the future. They've begun trading on NERD, albeit volume is anemic. Over time I expect this to change, but either of these names are difficult to hedge; however, with the diversity in the ETF, that's not a major concern. The limited early liquidity, no matter how much I like the concept and underlying holdings, must be noted. In short, this isn't the first place you want to go raising cash in your portfolio in a hurry.

Overall, I see BETZ as a great bet in the emerging sports betting and iGaming industry. This is an industry that I believe will see gross gaming revenues (GGR) reach a trillion dollars in the next decade. It should be viewed as a long-term buy and hold, not a trading vehicle. Use underlying individual names if you want to pursue that strategy. After the big run in DraftKings, I'm moving my position into BETZ to go along with NERD.

Get an email alert each time I write an article for Real Money. Click the "+Follow" next to my byline to this article.
TAGS: ETFs | Investing | Markets | Stocks | Trading | Gaming | eSports

Dealing with Impatience and Random Volatility

All traders have to set parameters that will determine when they will act.