By BRUCE KAMICH Sep 11, 2019 | 01:15 PM EDT
Stocks quotes in this article: PLNT
It is a long way away until we make New Year's resolutions, but one caller during Jim Cramer's " Mad Money" program Tuesday night asked about Planet Fitness Inc. ( PLNT) .
"I think this is a great secular trend, but be careful," said Cramer.
We looked at PLNT a month ago, noting that "The chart of PLNT looks like it is going to drop a few sizes. A close below $70 is likely to precipitate losses. Sell down to a sleeping position." Let's check out the charts again.
In this updated daily bar chart of PLNT, below, we can see that the price action on PLNT has continued weak. Prices have made a number of closes below the cresting 200-day moving average line and a bounce in late August stopped at the underside of the declining 50-day moving average line.
The On-Balance-Volume (OBV) line peaked in late April/early May and has declined into September, telling us that sellers of PLNT have been more aggressive. The trend following Moving Average Convergence Divergence (MACD) oscillator is in a bearish configuration below the zero-line since early August.

In this weekly bar chart of PLNT, below, we can see that prices have closed below the cresting 40-week moving average line. The weekly OBV line has declined from June and the MACD oscillator is in a take-profits, sell mode as it approaches the zero-line.

In this Point and Figure chart of PLNT, below, we can see a distribution pattern (top pattern) and a possible downside price target of $53. 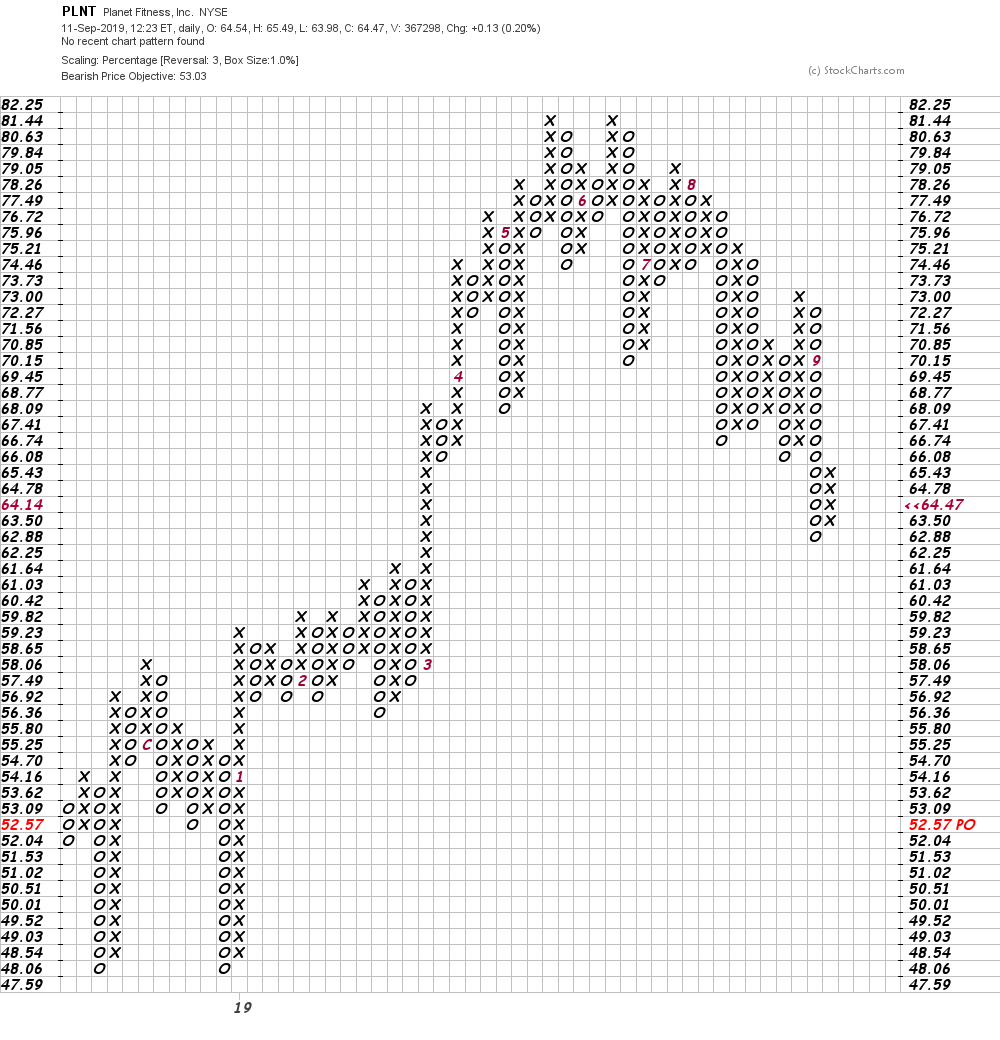 Bottom line strategy: In the past three years, PLNT has rallied from $20 to $80 and a major correction to the $50 area (a 50% correction) would not be a surprise. Keep your powder dry for now.
Get an email alert each time I write an article for Real Money. Click the "+Follow" next to my byline to this article.
TAGS: Investing | Technical Analysis | Healthcare | Mad Money | Consumer Discretionary

The rotation from 'growth' to 'value' continued, with several themes at work in smaller stocks.

Jim Cramer: If the End of the Covid Era Is in Sight, Here Are the Stocks to Buy

I will come back to these names over and over again as we are now in the sweet spot for many.

With the state of Oregon's move to decriminalize drugs, the stigma around compounds like ketamine is lessening.

Electrameccanica Is Giving Me the 'Butterflies'

Here's a butterfly approach to playing SOLO, as dilution is likely on the way following the $200 million offering.