The best news I've heard in a long time. Sure, it's a bit late to save folks like me, and have no idea if it will be safe for those suffering from the long-term immune response that just can't quit, but maybe. Even better, this will protect our families, allow us to see our extended families. Perhaps even watch the New York Mets play ball in person, or watch Gene Simmons of Kiss breathe fire alongside tens of thousands of our fellow lunatics. Maybe your goals are quieter than that. Maybe you just want to be able to drive for a few hours and stop somewhere to eat and use the restroom without feeling that your life is in danger. I miss my parents. It will bother me to not see them for Christmas. Now, there's hope, maybe not in time for Christmas, but I'll move Christmas to March or April. That's cool.

Pfizer (PFE) announced on Monday morning that the vaccine candidate furthest along in development in collaboration with partner BioNTech (BNTX) had proven itself to be more than 90% effective in preliminary results from ongoing Phase 3 clinical trials. The FDA's criteria for approving a Covid-19 vaccine is believed to be an efficacy of at least 50% in placebo controlled trials. This obviously exceeds that. Dr. Anthoncy Fauci, in response, referred to the data as "extraordinary" and expressed optimism that Moderna's (MRNA) candidate, expected to show some data later this month, could be similar. As to safety, Pfizer states that they have not yet seen any serious side effects among the trial's 43K participants. So... safe and effective? Sounds like it.

Pfizer is expected to apply for 'Emergency Use Authorization" from that FDA by late November. The Phase 3 trial actually concluded in December. Pfizer CEO Albert Bourla said, "with today's news, we are a significant step closer to providing people around the world with a much needed breakthrough to help bring an end to this global health crisis." Bourla has intimated that this (messenger RNA vaccine development) could be the most significant medical advance in the past century.

Obviously, should nothing unwelcome come out between now and then, the problem becomes one of mass production and distribution. Thank goodness for the president's "Operation Warp Speed." It is in the logistics and distribution of it all that the success or lack thereof for this program will become apparent. Though Pfizer did not take funds from the program earmarked for development, the U.S. has secured orders for 100 million doses of this vaccine with an option to acquire another 500 million worth at least $1.95 billion Not like the program is not a factor here.

Pfizer expects to be able to start rolling out the vaccine this year, and have as many as 1.3 billion doses produced over the course of 2021. Hopes are that this vaccine offers up to a year of immunity versus at least 20 different mutations of the SARS-CoV-2 virus after the second dose (booster shot) given 28 days after the initial dosage.

Readers do not need to be told. The leaders on Monday morning are suddenly the reopening stocks, yes... the very same cyclicals that I downplayed in this mornings' Market Recon. Energy is roaring. The Transports are cooking with gas. See the long end of the curve? Suddenly, banks are a necessary part of every portfolio. 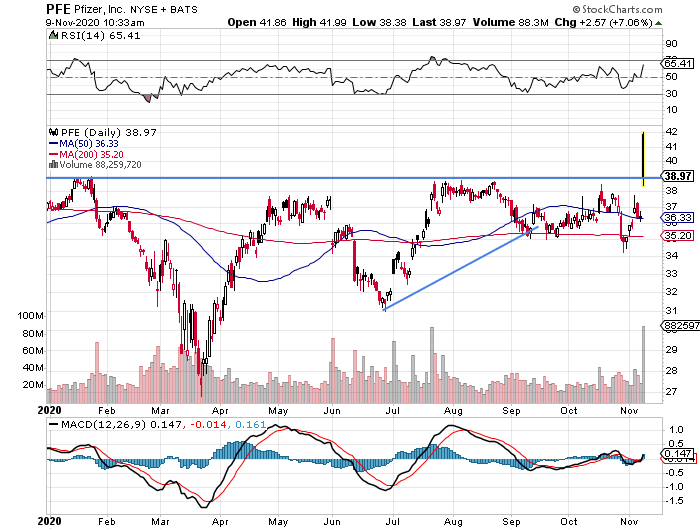 I am long the name, and I have made that plain since the start. I have also stated many times over the past eight months that Pfizer was the one. Being right does not necessarily make one money. As a stock, what I like most about Pfizer is the stock's price stability, so that one can write calls against the shares with some consistency, as well as the $1.52 annual dividend, good for a 4.2% yield. PFE is the kind of name where one can make a nice return even if the shares never go up through taking the necessary and time tested route of net basis manipulation. Boring? Not in your life. Winning is never boring. By the way... the PFE $41 November 13th calls are still paying $0.55 this morning. $55 is $55. Rock and roll.

(Amazon and Disney are holdings in Jim Cramer's Action Alerts PLUS member club. Want to be alerted before Jim Cramer buys or sells these stocks? Learn more now.)

Get an email alert each time I write an article for Real Money. Click the "+Follow" next to my byline to this article.
TAGS: Drug Approvals | Investing | Markets | Stocks | Technical Analysis | Trading | Pharmaceuticals