Humanizing pets continues to be a great long-term theme, Jim Cramer told viewers during Monday night's "Mad Money" program. Let's zero in on one name -- PetIQ PETQ -- to see if it can make a comeback in the months ahead.

In this daily bar chart of PETQ, below, we can see that the price of PETQ tumbled from September to the end of December. Prices were basically cut in half, which was a much deeper slide than the broad market. After a modest bounce in January and February the trend of PETQ has been sideways. PETQ crossed above and below the mostly neutral 50-day moving average line and the same with the cresting 200-day line. Currently PETQ is above the declining 50-day average line but above the slightly declining 200-day average. The daily On-Balance-Volume (OBV) line made a modest decline in October through late December, which is kind-of remarkable considering the 50% slide in price. From January the OBV line has improved a bit suggesting that buyers are now acting more aggressively. A strong close above $32 or the April highs will likely be a breakout. The Moving Average Convergence Divergence (MACD) oscillator is poised to cross above the zero line to generate a fresh buy signal.

In this weekly bar chart of PETQ, below, we can see that prices just moved above the declining 40-week moving average line. The weekly OBV line shows some improvement recently and the MACD is poised to cross the zero-line on this longer time frame.

In this Point and Figure chart of PETQ, below, we can see that a trade at $33 will be an upside breakout and could open the way to gains in the $41 area. 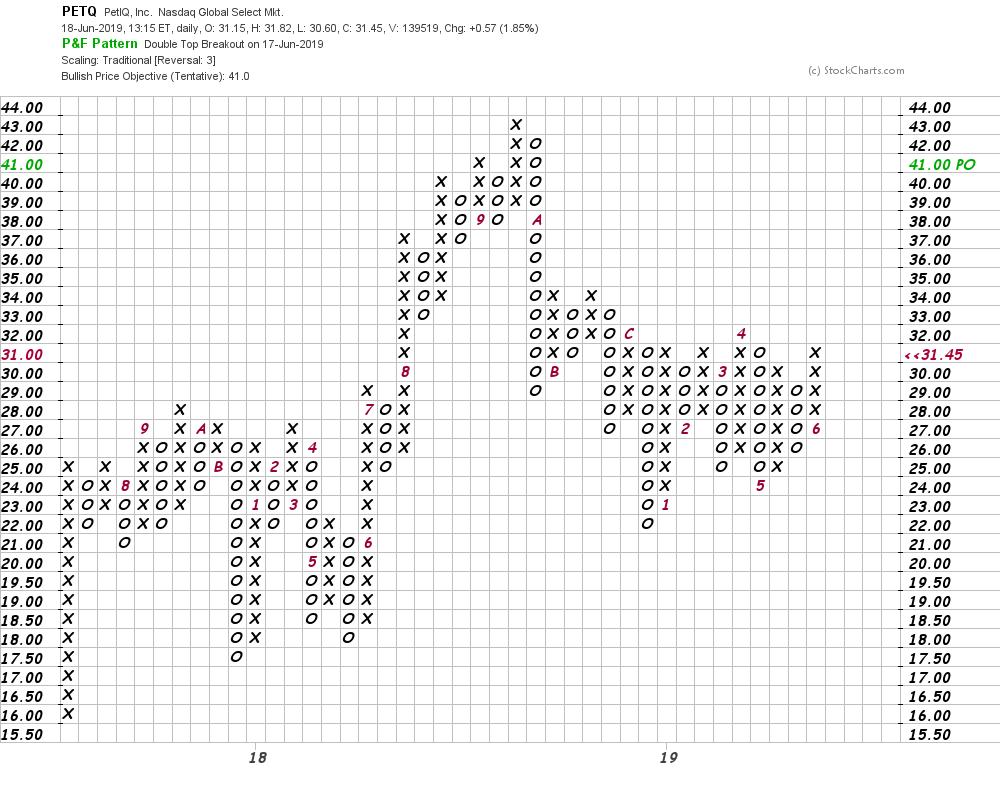 Bottom line strategy: The key question for PETQ right now is whether there has been enough new buying or accumulation since January to support a rally to the $41 area. Traders could consider going long on a close above $32 while risking a close below $28. $41 is our potential price target.

Get an email alert each time I write an article for Real Money. Click the "+Follow" next to my byline to this article.
TAGS: Investing | Technical Analysis | Healthcare | Market Recon