Singh explained that while their COVID testing business continues to exceed their exceptions, the company has made a dramatic pivot into life sciences, which now accounts for 75% of their business.

Consumables and services are a big part of the company's recurring revenue streams that are building year after year.

PerkinElmer has made five acquisitions over the past six months, all in the life sciences area. Singh noted that cell and gene therapies will be a major trend over the next decade.

China remains an important market for PerkinElmer, accounting for 25% of total sales. Singh noted that food quality, safety and testing has been challenged during the pandemic in China, but is now returning to normal levels.

Cramer reiterated that there are only a handful of life sciences companies worth owning, and PerkinElmer is one of them.

Let's check and see if the charts agree.

In this daily bar chart of PKI, below, we can see that prices corrected to the downside in January and February but bottomed in March and have been coming back strong. PKI is trading above the rising 50-day moving average line as well as above the 200-day line.

The On-Balance-Volume (OBV) line has been neutral/flat the past three months but hopefully it will get in gear with the bullish price action. The Moving Average Convergence Divergence (MACD) oscillator is above the zero line and ready to cross to the upside for a fresh outright buy signal.

In this weekly Japanese candlestick chart of PKI, below, we can see that prices are in an uptrend above the rising 40-week moving average line. The weekly OBV line shows a rise the past three months and is giving us a much more bullish story than the daily OBV line. The MACD oscillator just crossed to the upside for a new outright buy message.

In this daily Point and Figure chart of PKI, below, we can see a potential upside price target of $172. 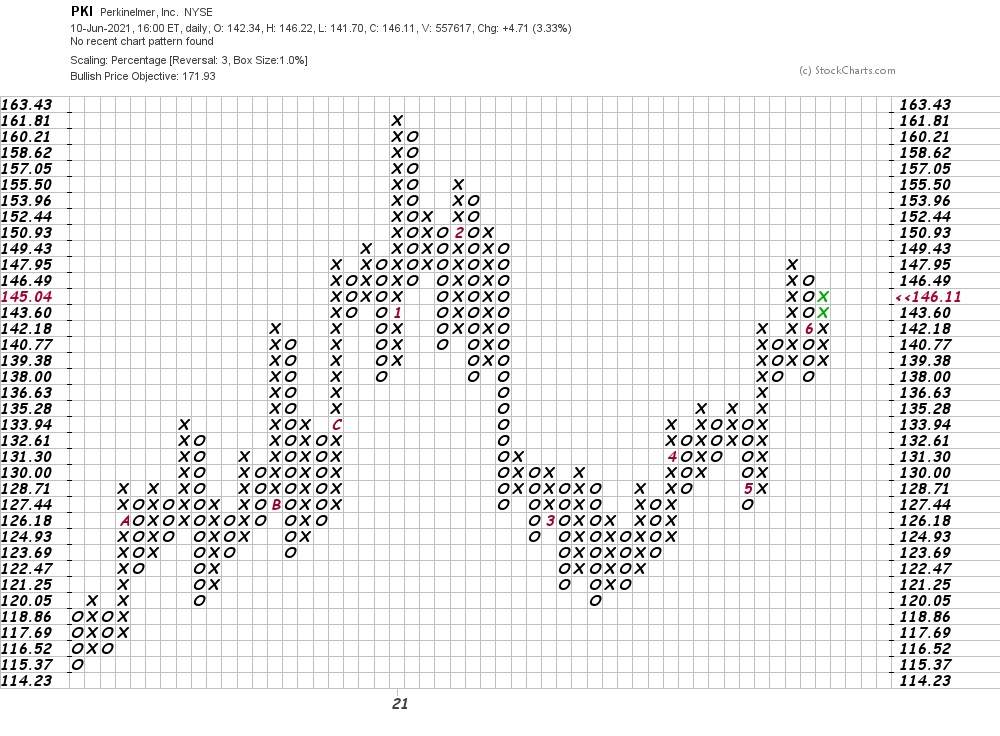 Bottom line strategy: Traders should approach PKI from the long side at current levels. Risk to $130 for now. $172 and then $200 are our price targets for now.

Get an email alert each time I write an article for Real Money. Click the "+Follow" next to my byline to this article.
TAGS: Investing | Stocks | Technical Analysis | Trading | Healthcare | Life Sciences | Mad Money | Executive Interview