Et tu Brute? To be honest, I have not been on the cryptocurrency bandwagon, outside of playing the miners and short-lived money losing adventure in Coinbase (COIN) as that name went public. I have been expecting an event that would draw in the values of most major cryptocurrencies. I expected that event to come in the form of tight regulation, directly from the Secretary of the Treasury... Janet Yellen for so long that I remember when her name was Jack Lew, and then Steven Mnuchin.

I thought how can the Treasury Departments and central banks of the developed world not only not allow their "power" to be drained by a decentralized "anonymous" entity that only speculative serves as a store of value for those needing to get their wealth out of the country they live in, and seems to serve as a medium of exchange at least as much or more for those with criminal intent than it does for legitimate commercial transaction.

That's why it came I think as a surprise to all that the shot fired (on Twitter (TWTR) , not an actual shot) directly at bitcoin had come from a source of recent support that had lent an increased level of legitimacy to bitcoin specifically and more broadly to a wide variety of cryptocurrencies.

The day had been sloppy. My trading had not been as lousy as the market itself, but my P/L for the day was missing the P. I sat in my backyard, a cool breeze washing over me. 1980's hair metal blasting in my airpods. Whoa! What was that? I yelled over to my son... the one who trades... the one who loves and is long Tesla (TSLA) , but to his credit, is at this point only playing with house money. I told him Elon Musk just did a number on bitcoin. Watch out for your Tesla.

From Tesla CEO Elon Musk on Twitter... "Tesla has suspended vehicle purchases using bitcoin, we are concerned about rapidly increasing use of fossil fuels for bitcoin mining and transactions, especially coal, which has the worst emissions of any fuel." Readers will recall that last February, Tesla disclosed that the firm had purchased $1.5 billion in bitcoin and was planning to accept that specific token as payment. Instant legitimacy from an S&P 500 company with a celebrity CEO. However, when Tesla reported Q1 2021 earnings in April, the firm revealed that it had sold about 10% of its bitcoin long position for a profit of more than $100 million. Musk, at the time, claimed that the sale was just to test the market's liquidity. On that note, on Wednesday evening, Musk also made clear that Tesla had no plans to draw down the bitcoin remaining on the firm's balance sheet. No idea if Tesla ever sold a vehicle in exchange for bitcoin.

Truth in The Matter

Oddly, many of the same folks that have enthusiastically supported bitcoin's growth are also folks that enthusiastically support transitioning the old, dirty economy into something greener for the planet. Interestingly, in the wake of Tesla having announced the firm's investment in bitcoin earlier this year, the University of Cambridge Centre for Alternative Finance made note that there had been a severe spike in the usage of electricity associated with the mining of bitcoin.

The Centre estimated at that time on an annualized basis, bitcoin mining was consuming about 121.9 terawatt hours, or for comparison's sake... about as much as Argentina. Last night, MarketWatch reported that this estimate had grown to 147.8 terawatt hours, or about as much as Sweden. We do know that more bitcoin is mined in China than anywhere else, with Xinjiang being a key center for this activity. We also know that energy in that region is largely fueled through the use of coal.

Now, I have seen all of the knocks on Elon Musk this morning concerning where the energy comes from for the manufacture of Tesla's electric vehicles, and the batteries they use, as well as the rocket fuel used at SpaceX. None of that makes his statements on bitcoin incorrect. By the way, Musk has posted material this morning showing bitcoin's mining energy usage, so he has not backed off at all. He did, though, make clear that Tesla is open to accepting perhaps a different cryptocurrency if a greener offering were to arise from the pack. I do not think he is referring to Dogecoin, but that is mere conjecture on my part. 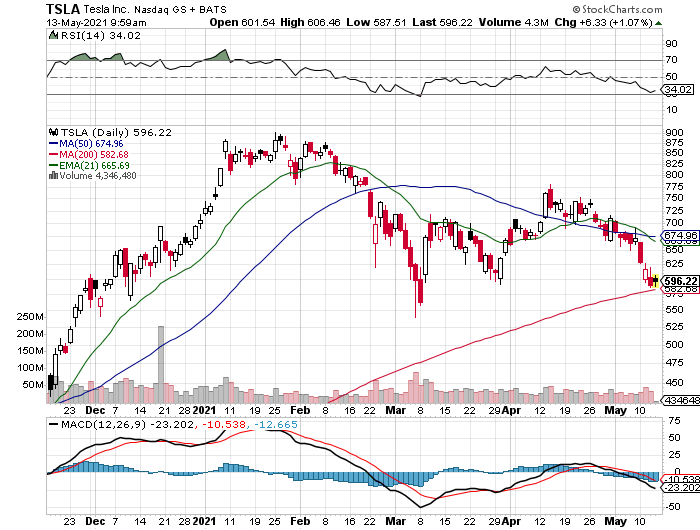 Investors will note that this week Tesla suffered a mini or swing trader's death cross (21 day EMA crossover of the 50 day SMA), and that the shares have pressured the all-important 20 day SMA of $582. Fact is that this level was indeed pierced overnight. However, the level has to this point held. A spot to purchase the shares? Perhaps, but beware, Tesla is not growing in China like it was. Know also, that should that red line crack for real, that across Wall Street, risk managers will force portfolio managers to reduce exposure.

The world's most famous cryptocurrency seems to be drawn to the $50,000 level (obviously in dollar terms). While down 10% from Wednesday, this is well higher than numbers deep into the mid $40K's (-17% or so) which is where I saw it trade at one point overnight. Do we buy this dip in bitcoin? I don't. You do you, however. I admittedly have been wrong on bitcoin. Either wrong altogether, or wrong on timing if and when the Janet Yellens of the world finally take action. Being wrong on timing is still wrong when you are a trader.

Has anyone out there wondered if maybe blockchain technology is not quite as anonymous as is generally believed? I mean what if the government has not cracked down on, or regulated the use of cryptocurrencies because they are easier able to track criminal activity this way than in cash. A lot of bad guys just gulped hard. Serious food for thought.

Get an email alert each time I write an article for Real Money. Click the "+Follow" next to my byline to this article.
TAGS: Investing | Markets | Stocks | Technical Analysis | Trading | Cryptocurrency | Electric Vehicles