Very solid quarter to be precise. This (Thursday) morning, PepsiCo (PEP) posted the firm's fiscal third quarter performance. I think, perhaps, that while the firm beat expectations across most metrics that matter, and that the one negative takeaway might have been a contraction in margin thanks to the pandemic... that key to the report was the following. PepsiCo provided forward looking guidance for the first time in six months, or since the virus became an issue. That's huge. Why, because it's positive? While true, not really. This is huge because it shows confidence in the ability to model, to overcome uncertainty. This one change is everything.

For that third quarter, PepsiCo reported adjusted EPS of $1.66, which beat the street significantly. This was good for earnings growth of more than 6%. No hocus pocus here. Using GAAP standards, the number drops an entire penny to $1.65, still easily beating consensus view. As far as sales goes, group revenues generated amounted to $18.09 billion, beating expectations by more than $800 million, and 5.3% year over year growth. The big beat was in organic growth, which strips out all the fun of currency exchange rates, acquisitions and divestitures. This line reads out at growth of 4.2% versus the 1.6% that Wall Street was looking for.

Core gross margin dropped 60 basis points (54.8%), and core operating margin fell 40 basis points (16.8%). That was due to the $147 million spent over this three month period on costs directly associated with the pandemic such as increased labor costs and providing personal protective equipment to that labor force.

Taking a quick look at the balance sheet, there has been considerable growth in both assets and liabilities since the start of the year. While I like the firm and how it has managed the business during these times, there has been substantial growth over nine months in cash, and in accounts receivable which I consider a positive. However, of the more than $13 billion growth in total assets, more than $3.5 billion comes in the form of goodwill.

Call me old fashioned. Call me an old "kook" because I actually still look at balance sheets, but that is one item I don't like. Not saying it's not legit, especially with a multinational large bcap like this, but I don't have to like it. The growth on the liability side that required balancing has come almost entirely in the form of both short-term and long-term debt obligations. Who can blame them in this environment? I still find today's data supportive of my decision to sustain my long position in this name. 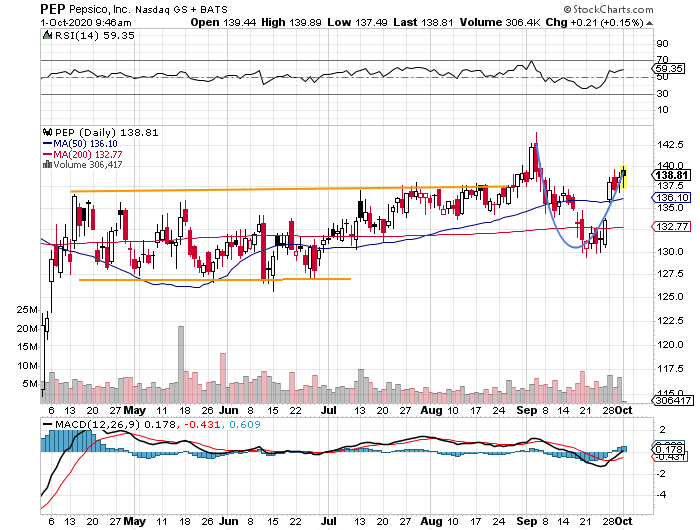 The chart shows a stock currently "in between". In between what? In between the gravitational pull, and potential acceleration. Stocks have a habit of filling gaps like the one created by PEP in late September when the shares exploded beyond the 200 day SMA, and took the 50 day SMA the very next day, holding the level ever since. Stocks can also accelerate beyond key levels such as these. Problem could be that PEP took both of these key spots really in one giant leap. So why keep the faith?

PepsiCo now expects to see organic revenue growth for the full year of 4%. The experts were looking for 1.25%. PepsiCo now sees full year EPS at $5.50. The street is down around $5.37 on this line. The firm expects to by year's end return roughly $5.5 billion to shareholders in the way of dividends (2.95% yield), and another $2 billion in repurchased equity. PepsiCo is confident. Your pal Sarge is very confident in keeping a defensive spot on the roster for a Staple such as this. Tostitos, Doritos, or Cheetos anyone? I've heard rumors that a few of you have been chowing down.

Get an email alert each time I write an article for Real Money. Click the "+Follow" next to my byline to this article.
TAGS: Earnings | Investing | Stocks | Technical Analysis | Trading | Beverages | Food & Staples Retail | Food & Drink | Consumer Products

Square's Most Significant Opportunity Is Still in Mobile Payments

For investors, mobile payments could represent a chance to get in early on a trend that is likely to accelerate in the future.