Long time Sarge holding PepsiCo (PEP) reported first quarter financial results on Thursday morning. The results, in my opinion, were good under normal conditions... These results were in fact excellent when considering the inconsistency of pandemic induced economic shutdowns around the world, severe weather conditions during the period across parts of the U.S., and the severe logistical logjams present at many ports globally.

For the period, PepsiCo posted adjusted EPS of $1.21, easily beating expectations. Revenue generation came to $14.82 billion, up 6.8% year over year, and also better than projected. Net income came to $1.71 billion, up from $1.34 billion a year ago, and good enough for GAAP EPS of $1.24. Clearly there were no adjustments made for anything other than legitimate purposes.

PepsiCo Beverages North America remains the firm's largest business, contributing $5.074 billion in sales to the $14.82 billion whole, growth of 4.8%. The other very large business would be Frito-Lay North America. Here, sales came to $4.236 billion, up 3.9%. The third and fourth largest business suffered contractions year over year thanks to the pandemic. The European revenue contracted 2.4% to $1.795 billion, while sales in Latin America decreased 5.2% to $1.242 billion. Among smaller businesses (less than $1 billion in revenue)... Asia Pacific, Australia, and New Zealand and the China Region posted an increase of 70%, while Africa, Middle Asia, and South Asia saw a 40% gain. Quaker Foods North America saw a much more modest increase in revenues of 1.9%. Operating profit across the entire firm expanded 20.1% to $2.312 billion.

Total Current Assets are now lower than they were three months ago, due largely to a significant reduction in cash and cash equivalents, as well as short-term investments. I don't completely love that, except that at least some of that appears to have been used to pay down long-term debt obligations which I do like, though short-term debt obligations have increased marginally. Perhaps this has something to do with the firm's completion of it's share repurchase program and its stated intention not to repurchase any more equity over the remainder of this year (2021). Everything else appears to be in order. This is not a weak balance sheet by any means. Goodwill, which is a line item I follow for all my names, remains stable.

The firm has reaffirmed guidance for FY 2021. The components of such guidance being a mid-single digit increase in organic revenue, a high-single digit increase in core constant currency EPS. A core annual effective tax rate around 21%, and total returns to shareholders of roughly $5.9 billion, which as previously stated will from this point be in the solid form of dividend payments. The firm currently pays $4.09 per share annually, good enough for a yield of 2.9%, which is why the name has been welcome on my book for so long. 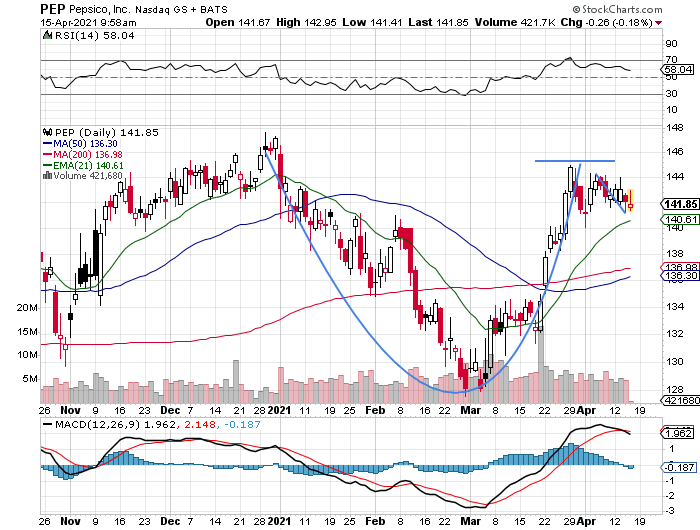 If an investor was here for the corporate repurchase program, then the clock says it's time to go now. Go where? The soul kitchen? I don't care. Those sticking around will see that PEP has spent most of 2021 to this point building a cup formation. The stock is now in the process of tacking on a handle that would work just fine if it were to test the 21 day EMA at $140 and find support.

Should this, which is the plan I am currently working on, come to fruition, PEP will then have a pivot point of $145, slightly below the old pivot of $147 level that we were using as pivot throughout 2020, a year the stock spent almost entire in a basing pattern. This slight adjustment brings in our target price (just a little) from $176 to $174. Our panic point had been $137. I think we'll leave that right where it is, but instead of a hard $137, we'll use the 200 day SMA. Right now, the two are one and the same but the stock is set up for a fairly imminent "golden cross"... (the 50 day SMA crosses over the 200 day SMA) as the two averages most likely to provoke portfolio managers now stand less than 70 cents apart.

Get an email alert each time I write an article for Real Money. Click the "+Follow" next to my byline to this article.
TAGS: Earnings | Economy | Investing | Stocks | Technical Analysis | Trading | Beverages | Consumer | Food & Drink