As a matter of fact, this Tuesday, tomorrow, March 16th at 01:00 pm ET, PlayNYdotcom will conduct a free live discussion open to the media and other interested parties to discuss a potential future for sports betting in the state of New York. Thought to have interest either in online sports betting in New York, or perhaps opportunistically moving into the economically depressed New York City market in some kind of physical form, would be such firms as DraftKings (DKNG) , Penn National Gaming (PENN) , Rush Street Interactive (RSI) , and MGM Resorts (MGM) , among others.

Even more interesting would be the fact that of the four corporations to be welcomed into the S&P 500 this weekend would be the aforementioned Penn National Gaming as well as Caesars Entertainment (CZR) , two "gaming" names among a chip name... NXP Semiconductors (NXPI) , and Generac Holdings (GNRC) , the generator guys.

On the one hand, as some folks have literally had to avoid crowds and fun for over a year, one would think that more and more folks would find ways to entertain themselves, and gaming would be one place to go. There's the fun of video games, which is an escape from reality, and then there is the excitement of gambling, a different direction in gaming altogether. I am no gambler, believe me, but there is something to sitting down at a roulette table and "getting on a streak" even if (when) you ultimately give it all back. The experience, as long as done responsibly, is fun. You can't replace the crowd experience online, but I am sure that one can still find the "thrill of victory, and the agony of defeat."

So, Penn National Gaming is the gambling equivalent of dipping on toe in each pond. The firm obviously commands a strong physical presence. The firm also plays the online game through a wholly owned subsidiary, Penn Interactive Ventures, that manages relationships with several of the online operations that you have heard of, but lack the physical footprint in certain states that require such a presence in order to operate online.

The firm reported its Q4 performance almost six weeks ago now, on February 4th. The numbers were not impressive in the least. Disappointment on both the top and bottom line. A fourth consecutive quarter of year over year declines in revenue comparisons for obvious reasons. We have a casino out by me on Long Island. It was closed for most of the year. Penn National blamed closures due to Covid-19 for closures and restrictions doing business in many states where the firm has properties.

PENN is expected to report the first quarter toward the end of April. States have started to open up more as the vaccines have rolled out. Should there be no bumps in the road, this is good for reopening names, of which PENN would be one. Not only will more people venture into casinos, but should sports continue to successfully operate, you have the NCAA tournament followed by Major League Baseball's opening day that in turn will be followed by the NBA and NHL playoffs as well as horse racing. Did I mention that enough college football teams that did not play in the fall are playing spring seasons as an alternative? If not, you need to subscribe to Disney's (DIS) ESPN Plus. I have been watching college football for three weeks.

For the first quarter, PENN is expected to post EPS of $0.26 on revenue of $1.13 billion. If realized this would be compared to the EPS of $-5.26 of one year ago on similar revenue. (Psst. Q2 comps are going to be crazy easy to beat on revenue.) 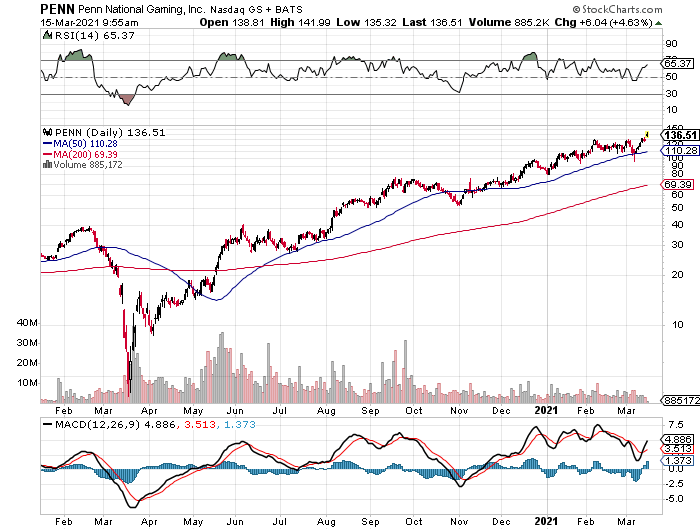 I tried to make a couple of my most often used models fit here. Sure, I could just make something up and write an article, but the fact is that though there has been a consistent trend in place since last March, there is not the kind of pattern in place at any point that I trust as a set-up. I don't like it anymore than you do. There will obviously be support for the name going into the weekend after the announcement of S&P 500 inclusion.

That said, the trend can not hold a Pitchfork over any timeframe, nor do standard Fibonacci levels fit nicely. Does that mean that the shares come in? At some point, yes. The 50 day SMA has been fine support for a year. The shares will either come into meet that line or that line will rise to meet the shares. Probably a little of both. The 50 day line currently runs at $110, with the shares trading at $133 after spiking as high as $142 earlier this morning. The good news there is that the gap created is already filling. At least that will be out of the way.

Penn National Gaming is probably a good investment if done properly. Maybe one can "game" the rebalancing. Maybe it's just me, but I'm already long several names in the space, including Caesars, which is also headed into the S&P 500, as well as cheaper (from a retail traders' perspective) plays such as Rush Street and Golden Nugget Online (GNOG)  , so I don't need to pay up for equity exposure.

I will say that PENN March 26th $110 puts are still paying $0.75, with an implied value of $0.90. That, right on the 50 day line, is where I am comfortable increasing equity exposure to this growing business.

Get an email alert each time I write an article for Real Money. Click the "+Follow" next to my byline to this article.
TAGS: Earnings | Investing | Markets | Stocks | Technical Analysis | Trading | Consumer Discretionary | Sports | eSports