General Motors (GM) released second quarter financial results on Wednesday morning, little more than a week after chief domestic rival Ford Motor (F) impressed Wall Street with their quarter. For the three month period, GM posted adjusted EPS of $1.97, which is being seen as falling well short of consensus view. The truth was that the range of expectations ran from $0.39 all the way to $2.33. Referring to anything as consensus would be misrepresentation. Nobody knew. What we really had was an average. GAAP EPS printed at $1.90. As far as revenue generation is concerned, that number landed at $34.2 billion, up 103.6% year over year (easy comp), and a whopping $4.5 billion better than expectations.

The cause of the wide range in expected profitability was likely the size of the warranty recall cost. The firm ended up booking $1.3 billion in such costs ($800 million from the Chevy Bolt alone) reducing net income to $2.8 billion, and EBIT-adjust of $4.1 billion. Net income margin for the quarter wound up at 8.3%, while EBIT-adjust margin landed at 12.0%. Automotive operating cash flow for the three months was $4.0 billion, while adjusted automotive free cash flow totaled $2.5 billion.

On the results, CEO Mary Barra said, "I'm pleased to report we're accelerating our progress and advancing our vision of a world with zero crashes, zero emissions, and zero congestion. The credit for our strong first half goes to our employees and extended team, including suppliers and dealers, who have collectively demonstrated strength, agility and resilience."

There was no update to a statement made by GM previously that the ongoing chip shortage would carve $1.5 billion to $2 billion from earnings. CFO Paul Jacobsen did say, "The chips really represent a little bit more of a lost opportunity of what could have been better, but the year is actually progressing quite well and I think we've overcome all of those initial expectations to exceed what we thought we could do at the beginning of the year."

The firm expects to launch the first Ultium-based vehicles this autumn, which will be the GMC Hummer EV Pickup, and the BrightDrop EV600 electric commercial vehicle. The all electric Cadillac Lyriq SUV will follow in 2022. Ultimately, the plan includes full sized electric pickup offerings based on Ultium technology to be sold under the Chevrolet and GMC brands.

Do I like General Motors? I do. I also like Ford. I think both have responded well to ongoing chip shortages and both are showing better agility in transforming their firms away from dependence upon combustible engines and shifting toward a more electric future than anyone expected. Mary Barra is not doing a poor job, but Jim Farley was dealt a weaker hand and in my opinion is doing more with that hand. Forced to own one of the two, I still choose Ford. That doesn't make you wrong if you pick GM. 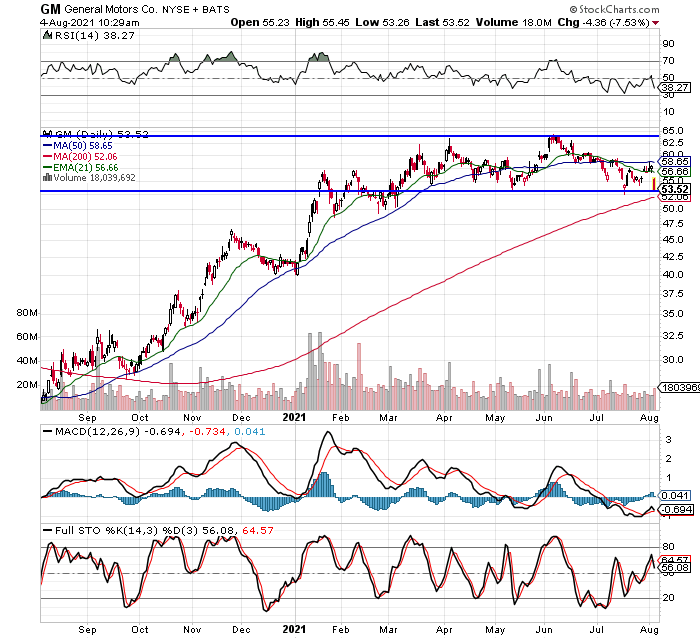 General Motors has been basing since March, and after these results, is now testing support at the bottom of that range for a fifth time since this consolidation pattern has been established. Relative Strength is weak, but not oversold. The Full Stochastics Oscillator is far more neutral than I expected. The Daily MACD looks awful.

My feeling is that those looking to add to, or initiate GM on this dip might want to show patience here. Should that blue line ($52.50) of support crack, there is the 200 day SMA at $52.06. so there should be some wood that would need to be cut for GM to break down, but if it does, there is no technical support for a long way. This is probably a good example of when one needs to observe Jim Cramer's three day rule.

For those willing to bet on support, my opinion would be that going long an August 20th GM $54/$58 bull call spread for a net debit of $1.00 is a safer play than going long equity at this level with no protection.

Get an email alert each time I write an article for Real Money. Click the "+Follow" next to my byline to this article.
TAGS: Earnings | Investing | Markets | Stocks | Technical Analysis | Trading | Automotive | Electric Vehicles