Shaich explained that for large-scale restaurants, the holy grail is one unified software platform that can manage it all, and that's what PAR Technology has created. PAR's solution replaces point-of-sale systems, delivery systems, customer systems and ordering systems, with everything talking seamlessly to the most important part of the restaurant, the kitchen.

Singh added that after years of stagnation, he focused his efforts over the past year on attracting and retaining the best talent and allocating the capital they needed to speed their development. The result has attracted the attention of Shaich and others, who see the potential of an enterprise-class system.

Let's check out the charts to see if they are attracting attention too.

In this daily bar chart of PAR, below, we can see that prices have made an impressive rally the past 12 months with relatively shallow corrections until this March. Prices declined into late March but have reversed to the upside this month. PAR rallied back above the 50-day moving average line and now its slope is positive. The 200-day moving average line is positive and has not been tested since June.

The On-Balance-Volume (OBV) line shows an uptrend and did not dip in March as prices corrected - impressive and tells us that buyers of PAR have been more aggressive. The Moving Average Convergence Divergence (MACD) oscillator moved to a sell signal last month but has quickly bounced back.

In this weekly Japanese candlestick chart of PAR, below, we can see that prices are up nine-fold from their March 2020 pandemic low. PAR is trading above the rising 40-week moving average line. Notice the bullish hammer formation at the end of March and the bullish confirming candle in early April to mark an upside reversal.

The weekly OBV line confirms the price gains. The MACD oscillator crossed to the downside last month for a take profits sell signal. More recently the oscillator has begun to narrow and could soon generate a new buy signal.

In this daily Point and Figure chart of PAR, below, we can see the March correction and renewed strength. Prices have broken the downtrend from the highs and now a new upside price target of $131 is being projected. 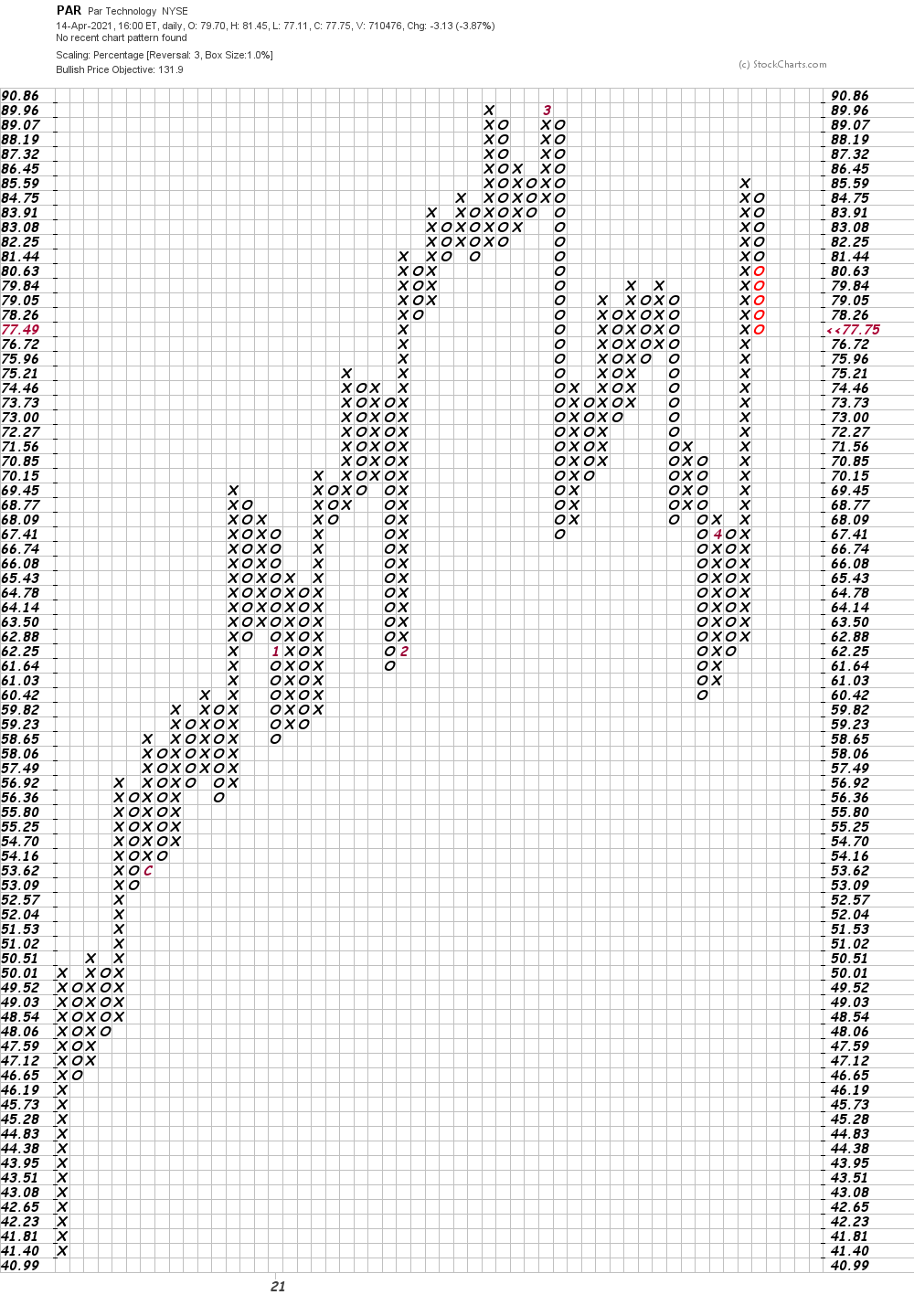 Bottom line strategy: Traders could go long PAR on available weakness risking to $65 for now. The $131 area is our price objective.

Get an email alert each time I write an article for Real Money. Click the "+Follow" next to my byline to this article.
TAGS: Investing | Stocks | Technical Analysis | Trading | Restaurants | Retail | Software & Services | Mad Money | Executive Interview