Both these top and bottom line results did beat Wall Street, while the revenue print was good for year over year growth of 27%. The adjusted EPS number was up from $1.60 for the year ago comp. The GAAP EPS number was up from a loss of  $1.23 one year ago. Because you were about to ask, Palo Alto took a $2.36 adjustment for share-based compensation related charges.

Palo Alto ended the quarter/fiscal year with a net cash position of $3.635B, and current assets of $6.415B, which was up 38% from a year ago. Current liabilities, however, also grew significantly. Current liabilities are up 62.3% year over year to $8.306B. The growth on the current liability side was driven primarily by an increase in outstanding convertible senior notes. This leaves the firm's current ratio at an alarming 0.77. In my world, that's normally not good enough. We are going to explain further.

Total assets come to $12.254B including $3.132B in "goodwill" and other intangibles. That's 25% of total assets, and not abusive by today's standards. Total liabilities less equity adds up to $12.044B, but no long-term debt. The firm's debt has moved into the "current" from the "total", and given that Palo Alto can almost pay off those convertible notes ($3.677B) out of cash, I think they get a pass on the balance sheet. That said, I would love to see that debt-load either reduced, pushed out in maturity or un-convertibilized.

This is pretty much unanimous. I have found 16 sell side analysts that are both rated at four or five stars by TipRanks and have opined on PANW since these earnings were released last night. All 16 rate PANW as either a "buy" or their firm's buy equivalent. The average target price of these 16 analysts is $675.81 with a high of $750 (Andrew Nowinski of Wells Fargo) and a low of $620 twice (Shaul Eyal of Cowen and Daniel Ives of Wedbush). Omitting the high and one of the lows brings the average of the other 14 down to $674.50.

There's no doubt. Palo Alto's business is rockin'. I owned the stock earlier in the year. Sold it months ago. Last night, once these numbers hit the tape, knowing I was too late to jump into PANW on the hop, I did grab some Zscaler (ZS) looking for the sympathy trade. It worked overnight for a cool 4%. PANW is trading almost 10% higher this morning.

The business is growing. When is there not going to be a growing need for cybersecurity? Probably long after you and I are pushing up daisies. The guidance is strong. The balance sheet is creative, but not weak. The only thing I am not crazy about is the multiple. PANW trades at 68 times forward looking earnings. That'll be tough to sustain, especially if the economy moves into a recessionary period and companies either need to spend more to borrow when needing to invest in their businesses or just not spend. Some will take that chance. I won't be hanging onto ZS. ZS trades at 250 times. 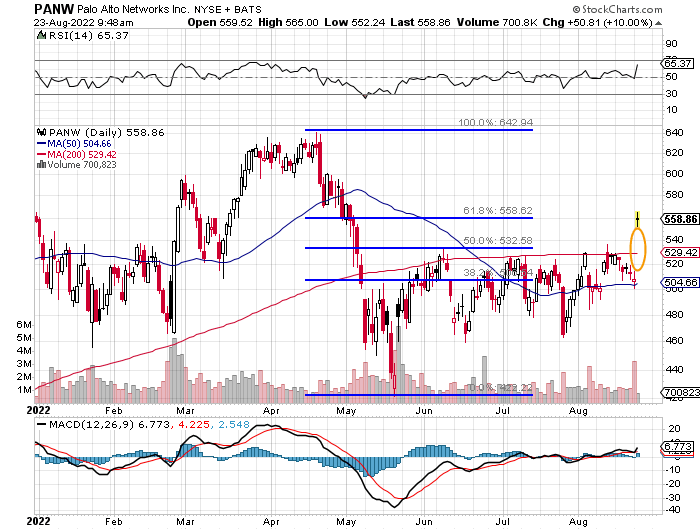 Speaking just for me, I would not buy PANW today in response to the move. The shares have hit early resistance at the 61.8% retracement levels of the April through May selloff. In doing so, the shares have left an open gap that spans from $514 to $552 and will likely need filling at some point.

On the bright side, the shares have retaken their 200 day SMA at $529, and if that line is held for at least a few days, maybe through the Powell speech on Friday, some portfolio managers will be compelled to increase exposure.

If I were to buy PANW here, I would be sure to sell (write) something against it, maybe the December $580 calls for a rough $46 or so. That would reduce net basis to $521-sh and create a profit of 11.3% if one was eventually called away at $580. This one might be too dangerous to sell naked puts, even for me.

Get an email alert each time I write an article for Real Money. Click the "+Follow" next to my byline to this article.
TAGS: Earnings | Investing | Stocks | Technical Analysis | Trading | Cybersecurity | Software & Services | Technology