Palo Alto Networks (PANW) will report the firm's fiscal fourth quarter financial results on Monday night. The report will be of key interest to me. Palo Alto is among several names that might be considered "best in breed' across the cybersecurity space. I see PANW as both a competitor and peer to two other top notch names, Crowdstrike (CRWD) and Zscaler (ZS) . Those two, I am also long. Those other "top" names will report their respective quarters next week, and in early September.

Thirty-One analysts follow Palo Alto, which is a lot. Consensus for EPS seems to be around $1.43, with the low end of the range of expectations just two cents lower at $1.41 and the high end way up at $1.60. The whispers are around $1.50. Projected revenue generated for the three months appears to be centered around $1.17 billion, which is basically where everyone is. Somebody is just a smidge higher at $1.19 billion. Should these consensus numbers be realized, this would amount to earnings "growth" of -3.3% on revenue growth of 23.3%. This would also amount to sequential revenue growth of 9%, while presenting as a fourth consecutive quarter of 20%+ year over year growth.

For the firm's fiscal third quarter, reported back in May, Palo Alto beat on both the top and bottom lines, while also increasing full year guidance. The closely watched "billings" metric is always key to analyzing software businesses. For Q3, PANW showed billings of $1.3 billion, up 27%, accelerating from the 24% growth of one year prior. Billings, for the new kids, is a focus because this number measures future revenue that has not yet been recognized. For Palo Alto, deferred revenue also grew 30% to $4.4 billion. Deferred revenue is a measure of order backlog. These two metrics for this kind of corporation are probably at least as important as is the actual reported top line number.

Over two days, last Thursday and Friday, three five star (rated by TipRanks) analysts opined on PANW. These three would be Brent Thill of Jefferies, Keith Weiss of Morgan Stanley, and Matthew Hedberg of RBC Capital. All three reiterated their "buy" or "overweight" ratings, as well as their price targets. Those targets average $460. Weiss sees "strong sales and order activity for core firewalls, setting up for a larger backlog." Hedberg wrote, "Overall, we believe the company remains well positioned to consolidate security spend with a high growth cloud and AI business and a durable network business. Acceleration out of last quarter, recent cyber-attacks, increased urgency around security/security consolidation and increased U.S. federal spending remain tailwinds." 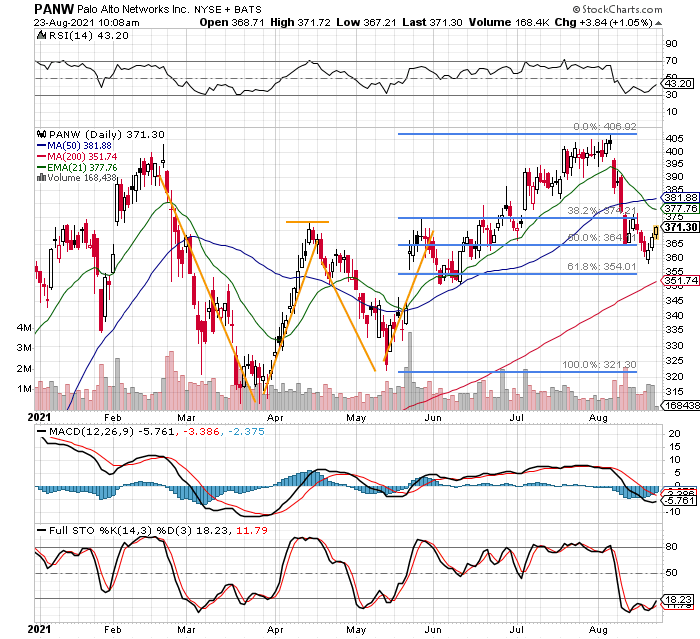 The breakout of the $374 pivot created by last spring's "double bottom" worked to perfection. The only problem? That $406 apex fell considerably short of my $440 target price. The shares have come in. We have experienced the swing trader's death cross (21 day EMA crossing below the 50 day SMA). I would like to see the $354 61.8% Fibonacci retracement of the May through early August rally as support, but I can not ignore that gap in May that opens the door on bad news all the way down to $345.

Still, some of our indicators are in our corner. While the RSI closes in on neutral, the Full Stochastics Oscillator is screaming that this name is oversold. All, while the daily MACD looks poised for a pop.

I don't think I'm adding ahead of the digits. I am already long. I am sticking with my target as well. However, I would love to buy some at the bottom of that May gap given a chance. I think I get long some $345 puts expiring short-term, and purchase a like amount of outs with a lower strike and same expiration just so... worst case, I don't get my teeth kicked in.