PagerDuty Inc. (PD)  gapped sharply lower Thursday, as fundamental analysts reacted to the company's second-quarter results released Wednesday evening, which featured in-line revenue and guidance and a billing disappointment. The reaction on the charts has been swift. Let's check the charts of this "incident management platform," as Jim Cramer says it's one to watch.

In this daily bar chart of PD, below, we can see that prices traded sideways in June, July and August, but recently broke out to the upside ahead of earnings.

The sharp price gains ahead of disappointing fundamentals appears to have resulted in a sharp and quick move in the opposite direction, as recent buyers quickly dumped losing positions. Prices are retesting the lows of June and July, as well as the top end of the bottoming 200-day moving average line. A sharp close below $24 is likely to precipitate further declines, in my opinion. The On-Balance-Volume (OBV) line shows a steady rise from early April to August before a sharp move down. The Moving Average Convergence Divergence (MACD) oscillator has been bouncing around the zero line in recent weeks which tells us that prices did not display much trend strength before the earnings disappointment.

In this weekly bar chart of PD, below, we see a changing picture. Prices were above the rising 40-week moving average line but we are going to see the line tested when this chart is updated through Friday. The weekly OBV line shows weakness into August and the MACD oscillator has been narrowing from above the zero-line.

In this updated daily Point and Figure chart of PD, below, we can see the recent price action with the gap filled in. This chart is now projecting the $13 area as a potential price target. I don't know whether PD will decline that far but it is a projection. 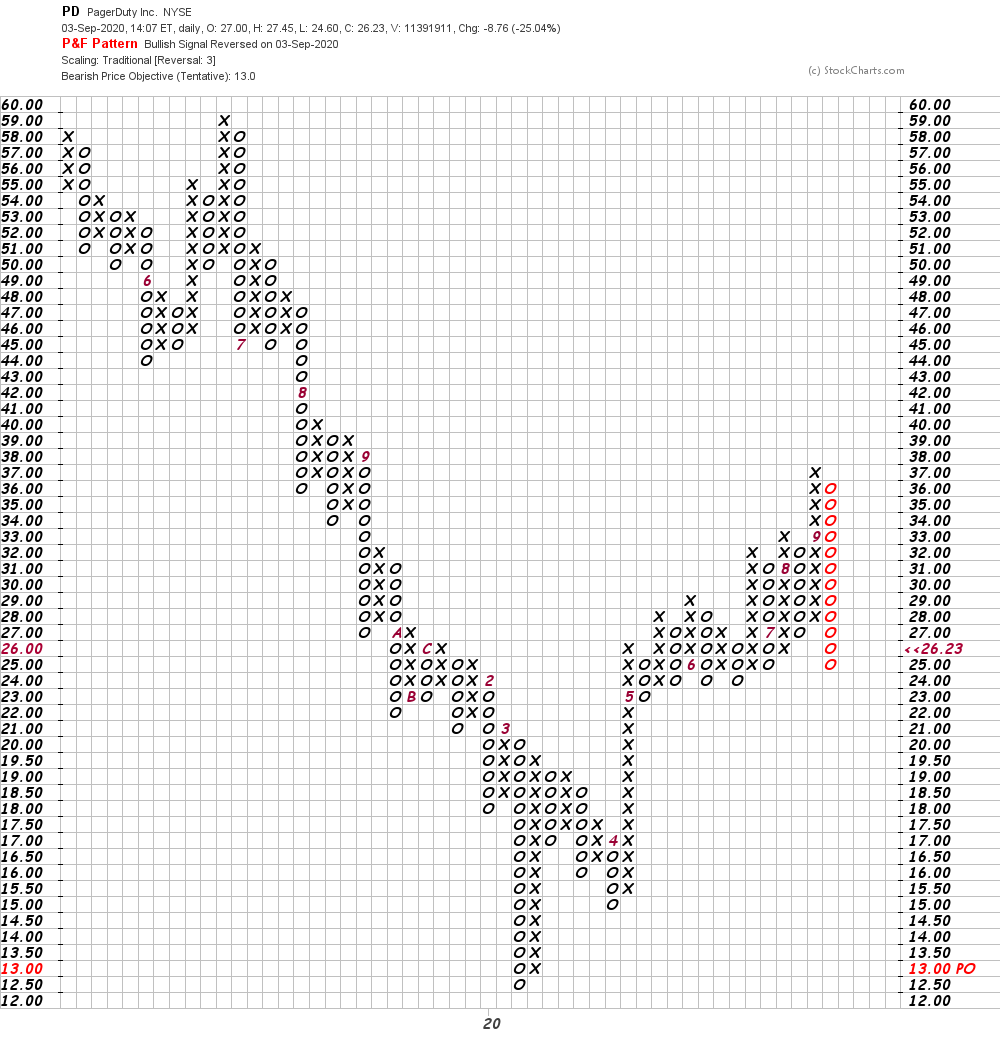 Bottom line strategy: This is my first time looking at PD, so I have no skin in the game. Spillover selling a break under the lows of June and July would not surprise me. Avoid the long side for now.
Get an email alert each time I write an article for Real Money. Click the "+Follow" next to my byline to this article.
TAGS: Earnings | Investing | Technical Analysis | Software & Services | Technology | Telecom Services