There's a little voice inside my head. When news breaks, and I learn that activist investors are now involved in a name that I am already long, that voice gets louder. It says only one word. It says "Yessss!!" Activist investors, rightly or wrongly, tend to pressure management in a way that maximizes shareholder value at least in the short to medium term. Fine by me. As a shareholder, my heart is nothing but mercenary in its intentions anyway. By now, you have most likely guessed correctly that this piece is going to focus on AT&T (T) .

As traders strolled into work on Monday morning, they learned that Elliott Management (owner of a $3.2 billion stake or more than 1% of the firm) had sent a detailed letter to the board of AT&T that basically outlined a path that if followed could bring the share price of AT&T to $60 per or greater by the end of the year 2021. Elliott lays out a four part plan to get there. Those four changes in direction would be an increased strategic focus, improved operational efficiency, a formal capital allocation strategy, and then quite significantly... enhanced leadership/oversight.

To simplify, not to mention to make the article readable, AT&T has broadened the firm's business approach under the leadership of Chairman and CEO Randall Stephenson acquiring HBO, Time Warner (Now Warmer Media to include the Warner Bros. film studio as well cable networks CNN and TNT), and DirecTV in recent years. While the traditional telecom business remains the firm's bread and butter, these additions bring about the potential to create a media and advertising juggernaut. The catch would be that in addition to piling on about $160 billion in net debt, this positioning forces the firm into direct competition with the likes of Walt Disney (DIS) , Netflix (NFLX) , Comcast (CMCSA) , and Amazon (AMZN) for the attention of entertainment seeking eyeballs.

In addition, the firm's CEO of Telecom (number two slot in the firm) John Donovan plans to retire this October. AT&T last week named executive John Starkey, known as an advocate of these past acquisitions, as the next President and Chief Operating Officer. In other words, Starkey will take over as the firm's number two, and possibly eventual CEO.

Elliott has expressed concern over not just the expense made in diversifying the firm's overall business direction, but also in this reshuffling of leadership at the C-level. Specifically, Elliott has asked if AT&T had conducted an external review prior to filling the number two slot at the firm.

Competition in The Core Business

It would appear that chief rival Verizon (VZ) had gone through a similar fork in the road in deciding where focus should be, just earlier. You'll recall that Verizon had spent (much less: about $9 billion) on acquiring AOL (America on Line) and Yahoo in 2016 after already spending $130 billion just to gain control over it's own wireless business earlier in the decade. Verizon CEO Hans Vestberg, who assumed the position in 2018, has restructured and refocused the firm's direction while pursuing a strategy aimed at reducing expenses. The new focus is the old focus... wireless connectivity with the implementation of 5G technology a priority.

What is obvious is that Elliott Management sees less potential away from AT&T's core businesses than current management does. Likely, Elliot also sees Verizon trading at 12 times forward earnings versus AT&T at 10 times despite the considerably higher operating cash flow generated by AT&T. While neither firm can boast a fortress like balance sheet (Current Ratios are awful for both), Verizon runs at a much more impressive operating margin (24% to 17%). 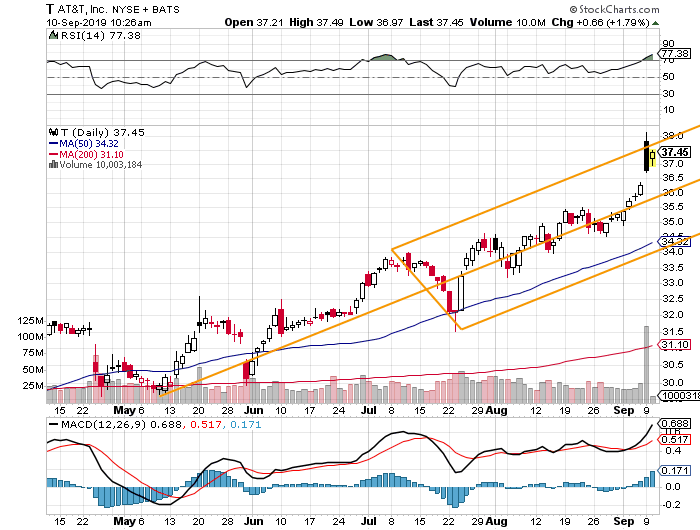 Obviously, the involvement of Elliott Management has changed the chart, as they have asked for clarification and made mention of refocusing on core business lines. The shares have made an attempt to break out this week, and hit resistance at the upper trend line of our short-term Pitchfork. Am I selling this name yet? No, my price target has been $39 all along, and I will take a little something off of the fastball if I get my pitch. In the meantime, I remain long both Verizon and AT&T.

If I could only own one, it would be... Verizon. Better dividend. Better focus.

(Disney, Comcast and Amazon are holdings in Jim Cramer's Action Alerts PLUS member club. Want to be alerted before Jim Cramer buys or sells these stocks? Learn more now.)

Get an email alert each time I write an article for Real Money. Click the "+Follow" next to my byline to this article.
TAGS: Activist investing | Investing | Stocks | Technical Analysis | Trading | Telecommunications | Telecom Services