At first, there was a Tuesday selloff. It felt broad. It felt ugly. The day wore on. There were indeed pockets of support that would develop. For equities, by day's end, there was still a "sort of" broad weakness, speckled with strength where you might have looked for it. No, this was not the reaction we expected coming into the weekend that might have countered a technically overbought condition across much of the large-cap equity universe. This was more organized than it was chaos. This was a selection. A selection developed through fundamental impact. Both national and global.

At the index level, the real soft spots were where they had already been. In the Transports, in the mid-caps, and in the small-caps. In other words, there was to be some doubt in forward looking economic growth. As for large-caps, the S&P 500 saw a seven day winning streak come to an end, but was really only down small, while the Nasdaq Composite (and Nasdaq 100) closed in the green for a ninth day in the past 11.

Breadth was sloppy, as you might have expected. Smaller stocks outnumber large cap-tech stocks at the Nasdaq, but tech stocks trade in heavier volume than their smaller cousins. Many NYSE names still hail from old-school type industries more reliant upon continued strength in this recovery. While at the NYSE, losers beat winners by nearly two to one, declining trading volume beat advancing volume by more than four to one. Uptown, at the Nasdaq... losers clobbered winners by a rough 11 to 5, while declining volume really just edged advancing volume by some 11 to 10.

Sure, equities were generally lower, but helped out by an afternoon rally. In my opinion... traders/investors did show some guts. Capital flowed into the U.S. Treasury market, badly flattening the yield curve. The U.S. 30 Year bond saw that yield crash down through the psychologically important 2% level, going out at 1.99%, while the U.S. 10 Year note rallied hard... all the way to 1.36%. I see those two products paying less than 1.97%, and slightly more than 1.34%, respectively, this morning, so that rally has continued overnight.

That action would quite obviously place both the REITs and the Utilities at the top of the daily sector performance tables. The bottom two slots were taken by Energy on expectations that OPEC and OPEC+ will lose control over oil production, and the Financials in response to collapsing longer term interest rates. Third and fourth from the bottom, still deep in contraction came the Industrials and Materials on economic growth concerns after a rather gnarly disappointment in the results of the June ISM Non-Manufacturing survey that came on top of an also mildly disappointing ISM Manufacturing report last week.

So, where were these guts that I spoke of? Investors (portfolio managers) turned to old friends in times of uncertainty, in times of fundamental selling across certain sectors, and in times of shrinking, yes shrinking yield. Technology. Once again, technology as a sector closed higher, supported by hardware which was supported once again by Apple (AAPL) . Software was a strength. Why? Because there has never been a greater need for cybersecurity. Cyberark (CYBR) , Zscaler (ZS) , Crowdstrike (CRWD) and Okta (OKTA) led the way north for the group. Then there was the internet. Those names were strong, but reside in the Communication Services sector, not in tech. Even more interestingly, internet names were led in a northerly direction by Amazon (AMZN) , which is classified as a "broadline retailer" and as such is placed in the Consumer Discretionary sector. As more and more firms become, in some way, technology firms, and as technology firms become ever more diversified in what they do, these classifications become increasingly confusing, and shall I say... less meaningful.

The Concern Over Sustained Growth

Contrary to popular belief, this economic recovery that we seem to be enjoying has hit a pressure point, where perhaps the vee shape extends to the right at a lesser slope for a time. This is why longer dated Treasuries are trading at multi-month highs (meaning yields are at multi-month lows). I know there are a few out there that will shake their heads at this, and strongly disagree based on where they live, but I just spent two weeks in Florida. I worked last week, so some readers might forget that I took the week prior off. The biggest shock? I did the grocery shopping upon returning home. Prices in general for produce and some staples were (sitting down?)... lower than they were two weeks earlier. Not for everything, but for enough items to pleasantly surprise this shopper.

Now, let's talk about the ISM Non-Manufacturing Report for June that was published on Tuesday morning. It's not that the headline number was so bad. The Services PMI hit the tape at 60.1 versus expectations that were above 63. If you have been watching this series for a while then you already know that traditionally, 60 is an outstanding headline number. The problem is deeper than that. New Orders remained strong, though the pace of the acceleration appears to have cooled. Backlog of Orders grew even hotter than it was. That's a positive. Prices remained red hot, as they had last week for the manufacturing survey. The problem is in employment.

So, is employment itself slowing? Last Wednesday and Friday, we learned through the ADP Report and the BLS Non-Farm Payrolls number that private sector employment is still growing but not quite as robustly as many had hoped. We also learned through that NFP release that public sector employment made up as much as 22% of all hiring for the month. While public sector employment is necessary, and can contribute to velocity... it does not add to productivity. Oh, and then again, there was that pesky BLS Household survey that for some bizarre reason... showed outright contraction at the headline level for national job creation. Hmmm.

As a matter of fact, yes. I am sure that at least a few readers also read about that hospital in Cheyenne, Wyoming in the Wall Street Journal on Tuesday. In Missouri, according to the Financial Times, a rough 90% of new COVID-19 infections are of the Delta variant, while the CDC estimates that nationally 25% of all new infections are of this variant.

Why is this such a big deal? The Delta variant has caused havoc in the UK, despite the UK having similar vaccination rates in comparison to the U.S. The U.S. has averaged about 13K in new infections per day, up from about 11K just two weeks ago. The problems here are several. For one, doctors believe that Delta is between 40% and 60% more transmissible than other variants. Anecdotally, some believe that this variant does not discriminate by age as other variants had, thus making all unvaccinated persons far more vulnerable. That said, all persons under the age of 12 in this nation, as well as millions of adults remain unvaccinated.

A new study out of Israel shows that while the Pfizer (PFE) /BioNTech (BNTX) vaccine remains highly effective against severe illness, that against this one variant, efficacy against infection drops to 64%. This means that those vaccinated may not feel sick, but might still be able to pass the virus on. Israel has relied almost solely upon this vaccine and this vaccine accounts for more than half of all U.S. vaccinations to this date.

Trust me. I know many have doubts about the vaccines. I know many of you. I can not think of anything I've gone through that has been as bad as COVID. Yes, the vaccines can make you feel sick for a day or two. Some people for longer. Some even have severe complications. The risks, at least in my experience with both... are far greater with the virus itself. Fourteen months later, and I still have some symptoms. I know others who have the post-viral syndrome even worse. Don't play games.

About the only thing I can think of that this country is less mentally prepared for than another significant wave of infection would be a wave of infection that disproportionately impacts the unvaccinated, which at this time the largest single demographic of such persons would be children. Oh, and now there's this new Lambda variant that we know even less about.

For a while on Tuesday, I started to think that maybe markets weren't all that crazy about Jeff Bezos. Then, I thought maybe the markets believed that new Amazon CEO Andy Jassy was perhaps more open to the idea of a stock split than had been the previous chief. Then... I saw the news. The Department of Defense had cancelled the Joint Enterprise Defense Infrastructure (JEDI) cloud computing contract (valued at $10 billion) that had been awarded to Microsoft (MSFT) over Amazon back in October 2019, under the Trump administration.

The Pentagon said: "Due to evolving requirements, increased cloud conservancy, and industry advances, the JEDI cloud contract no longer meets its needs." The Pentagon now plans to open a new contract to competition. The DOD will openly solicit The Joint Warfighter Cloud Capability program to just Amazon and Microsoft as they are the only two providers that the Pentagon feels can meet the program's needs. Hence, AMZN ran 4.7% for the day. Hence. Microsoft put on an optimistic face as both firms officially looked forward to renewing the competition. Interestingly, MSFT did not selloff on the news. Let's go to the charts. 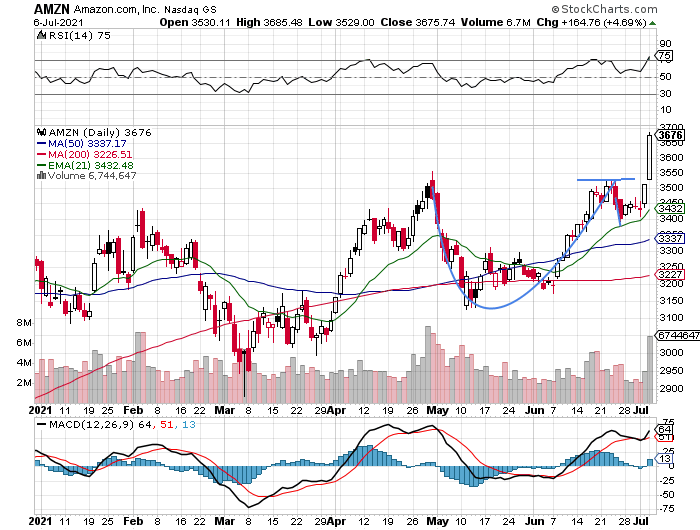 For Amazon, the cup with handle pattern that begins with earnings in late April takes precedence over the much longer basing pattern that goes all the way back to last summer. The breakout appears to be real, and moves off of a pivot of $3,524, down from the $3,552 pivot that we would have recognized if we stuck to the basing pattern. The shares are technically overbought, but I would hold my horses on taking profits. If this is the breakout that we have been looking for all this time, this pony has room to run. 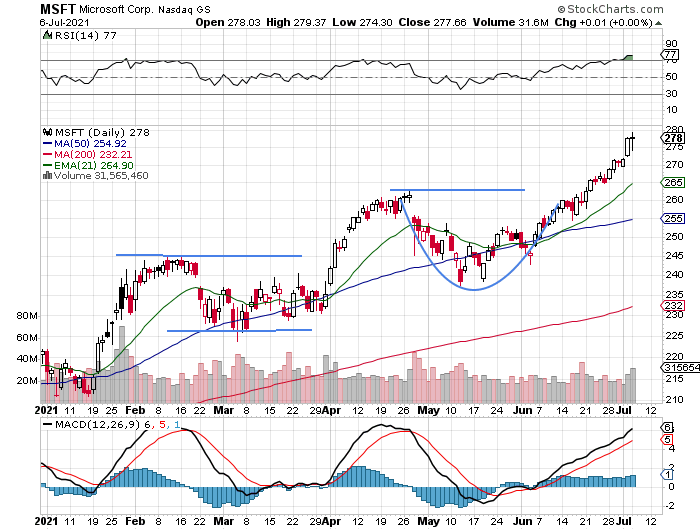 I showed you this chart about three weeks ago. Nothing has changed technically, with the exception of the breakout of the cup pattern (with no handle) This name is like Amazon... also technically overbought. Like with Amazon, I am going to ignore that warning. The shares may trade sideways for a bit, but I think a true handle would have attached itself to that cup by now, if there were to be one.

(Apple, Amazon, and Microsoft are holdings in Jim Cramer's Action Alerts PLUS member club. Want to be alerted before Jim Cramer buys or sells these stocks? Learn more now.)

Get an email alert each time I write an article for Real Money. Click the "+Follow" next to my byline to this article.
TAGS: Economic Data | Economy | Investing | Markets | Stocks | Technical Analysis | Trading | Cybersecurity | Technology | Market Recon | Coronavirus