By TIMOTHY COLLINS Jun 12, 2019 | 02:25 PM EDT
Stocks quotes in this article: TSLA
When my kids were younger, we had an "Elf on the Shelf." If you aren't familiar with this, it is an elf that comes with a storybook by the same name. The short version is the elf watches the kids during the day, then at night, flies to the North Pole to report to Santa if the children were naughty or nice. And I'll tell you what, when the kids believed the elf was real, everything was great. The kids behaved and believed everything they were told or asked, as long as the elf was present.
For Tesla ( TSLA) bulls, Elon Musk has been "Elon the Elf on the Telsa Shelf" for years now. As long as they believe the story, they'll fall in line. Unfortunately, when people begin to understand that most of what is said is simply a story, they lose faith. The power of those words fades. In the case of Tesla stock, price fades. Honestly, I can't parse what was stock pump, what was plausible, and what was fantasy and wishes.
The biggest issue I see is the company is always about what's tomorrow. That's not a problem if, when tomorrow comes, you deliver. That has seldom been the case with Tesla. When tomorrow comes, Musk points at the next tomorrow. Put me in the "prove it, don't just say it" camp.
The daily setup on the Tesla chart does have my interest. The V bounce from the $175-level is now threatening a gap-fill. A close over $227.50, and Tesla could enjoy a quick $30 higher.
I thought we might even see that today, after the strong open. But with this fade, now Tesla is poised to potentially lose the sharp-angled support-line. A close under $210 would be troubling for bulls. The Full Stochastics recent push higher should be a positive, but we are hitting the levels where it failed in April.
In terms of long or short, I would look long above $227.50, keeping in mind the 50-day simple moving average (SMA) could be a challenge while looking short under $210 -- keeping in mind the 21-day SMA could act as support. It would be preferential if these levels were out of the way when there is a break.
Before today's action, I would have given the advantage to the bulls, but when the market pushes Tesla red after Elon shoved all the bullish headlines he could into a single day, I have to believe big money sits with me on the "prove it" side of the fence. The technology is there for this company, but until we see a change in management, I don't believe it will be anything more than an Elon Elf cult stock with a growing number of disbelievers each day. 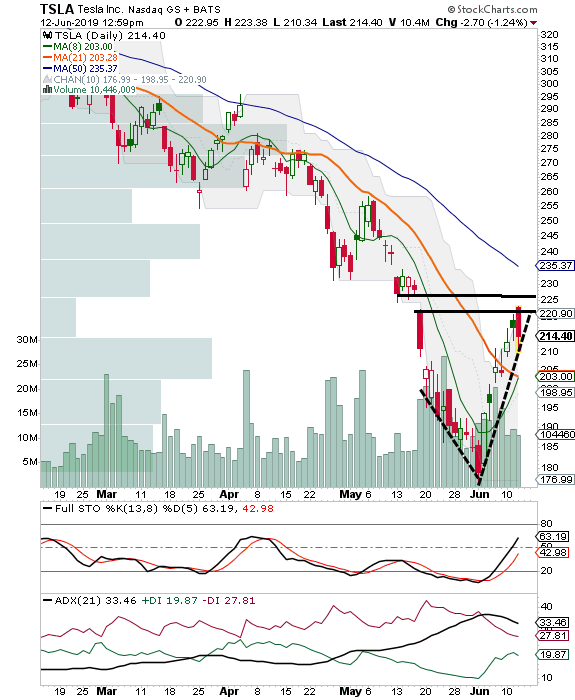 Get an email alert each time I write an article for Real Money. Click the "+Follow" next to my byline to this article.
TAGS: Investing | Options | Technical Analysis | Automotive | Transportation | Stock of the Day

Believe it or not, at some point WFC will be back above $50.

A Bearish Bet on the VIX

I would be a buyer of these VXX puts.

Let's Put Slack Back to WORK

Here's a trade in the name as we return to a new normal.

How to Play Coca-Cola's Potential to Pop