In my hunt for energy names, I'm taking the lead from the owner of the Dallas Cowboys. I'm lassoing in Comstock Resources, Inc. (CRK) .

The owner of the Dallas Cowboys has an over $1 billion stake in the name, too.

But let's back up and talk about the headwinds hitting global energy over the past weeks. First, the Nord Stream I and II natural gas pipelines that run through Europe were taken offline for the foreseeable future. Also, last week, OPEC announced a two million barrel-per-day production cut. Despite these bumps -- and continuing concerns on whether we will be able to avoid a recession in 2023 -- I'm now allocating more in my portfolio to energy.

Here's why a trade in Comstock makes sense. The Haynesville basin is a premiere natural gas shale play for several reasons. First, it has been substantially delineated since 2008. With advances in drilling and completion technology since 2015 -- namely, longer horizontal lateral length and larger well stimulation -- it is a very de-risked basin. Second, the management team has substantial knowledge of the basin, having drilled and completed 364 operated wells there since 2015.

As a result, Comstock has the lowest cost structure of all natural gas producers at $0.74 per one thousand cubic feet of natural gas equivalent (Mcfe) vs. an industry average of around $1.40 per Mcfe. The company should make around $3.70 a share in profits this year and the stock trades near $18.00 a share, given it a forward PE of just over five times earnings. 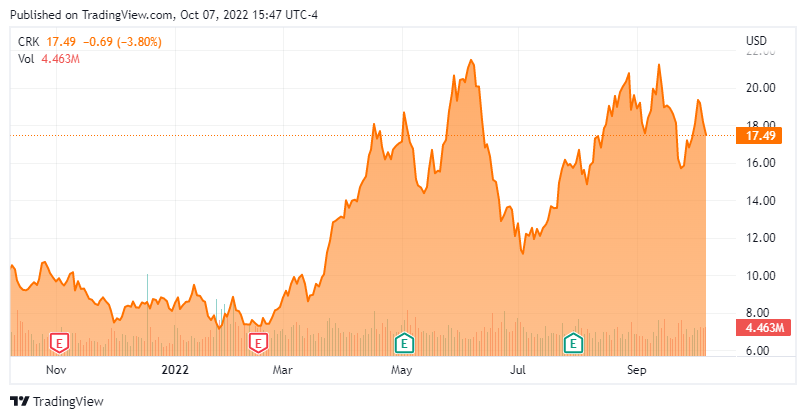 It should be mentioned, the company has this sort of profitability, despite having production massively hedged. This has left a ton of money on the table in 2022, even as natural gas prices have dropped 30% over the past month and a half. Comstock has only realized an average price of around $3.60 MMBtu over the past 12 months as a result.

If natural gas prices remain near $7 per million British thermal units for the balance of the year, Comstock stands to generate fiscal 2022 free cash flow of around $900 million. The stock's market cap is a tad over $4 billion. The company is using this cash flow to substantially pay down the debt on its balance sheet. This should allow it to resume a dividend payout this quarter, for the first time in nearly a decade. Insiders seem to like the company's long-term prospects here they added nearly 150,000 shares in aggregate during the month of September. Options against this equity are both very liquid and lucrative, making the name a solid covered call candidate at current trading levels.

This is how one can execute a covered call position in CRK. Using the March $18 call strikes, fashion a covered call order with a net debit in the $14.20 to $14.30 a share range (net stock price - option premium). This strategy provided downside protection of approximately 20% with 25% upside potential even if this stock does little over the next five and a half months.

Get an email alert each time I write an article for Real Money. Click the "+Follow" next to my byline to this article.
TAGS: Investing | Oil | Options | Oil Equipment/Services |

How has my 'Dandy Dozen' list performed so far? Let's look at the results and my strategy behind them.

CFG offers security, but not necessarily a 'home run' win. Here's how to play it.

Crypto Fears Bit at Signature Bank, but for No Good Reason

Now that uncertainty has made this bank name an opportunity. Let me show you how to play it.

Sealed Air Is Ready to Pop

Just like its bubble-wrap, Sealed Air Corp. is ready to make some noise. Let's see how to play it.