I was surprised to see the following headline on FedEx (FDX)  this week. I can't really figure out why they cautioned against owning the shares.

Here's why I say that. The table below details FDX's progress since the end of fiscal 2013 right through the current fiscal year due to end on May 31, 2023.

FDX grew all major metrics by significant amounts while also retiring greater than 21% of the shares outstanding.

Continuous holders more than doubled their money yet a pullback from an all-time peak of $319.90 in April of 2021, FDX shares had dropped by a stunning 30.1%. 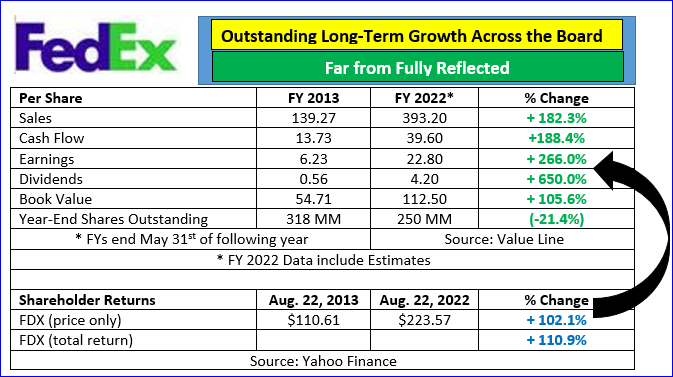 As of Monday, the stock appeared quite undervalued.

What is FDX really worth?

How many proven growth stocks can you name that have such great track records yet sell for single-digit multiples?

There were just two similarly cheap entry points of FDX since 2013. It took the Covid-panic's exact nadir to send FDX to 9.3-times earnings. Smart/lucky buyers back then were treated to a 9-month surge from south of $89 to north of $305.

A simple reversion towards the mean valuation to 15-timesearnings would send FDX up towards $342 by the end of May 2023. That implies 10-month upside potential of 53% plus dividends by then on this very blue-chip name. 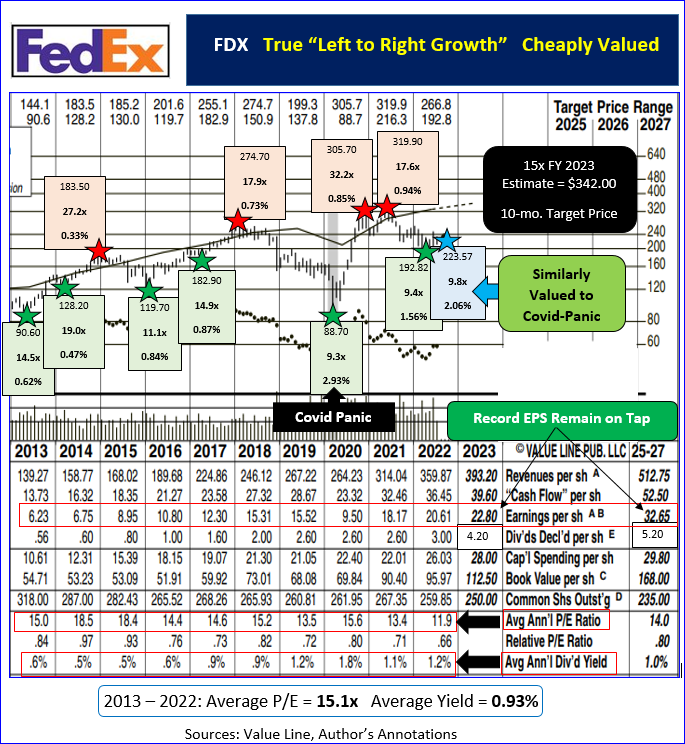 Yahoo Finance gives an enigmatic recommendation on FDX. They call the shares "near fair value" while simultaneously looking for a rebound to $290.79 by this time next summer.

Most of us would settle for 30% annually plus dividends, but I find it hard to square the "fairly valued" with that prediction. Go figure.

Yahoo Finance's goal price appears quite conservative, as well. It only implies FDX would sell for what would then be just 11.7-times its own fiscal 2024 projected EPS. 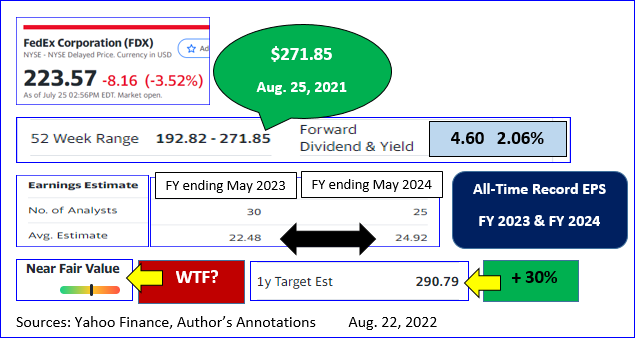 FastGraphs' opinion on FDX is more in line with reality.

It calls FDX's typical price-to-earnings as 17.26-times, which I consider a bit aggressive. As such I only included its target prices for May 2023 and May 2024 based on a 15 multiple.

On that basis FastGraphs' predictions on FDX for $345 or so by next May and nearly $385 a year later appear quite reasonable. 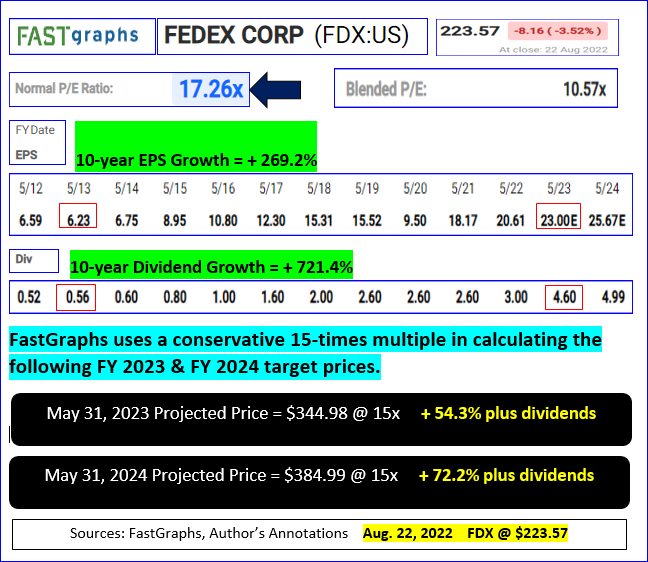 Note, too, that management goosed the quarterly dividend rate from 75 cents per share to $1.15 (up 53.3%) earlier this year in a clear sign of confidence for the future.

Value Line's three to five year projected price range for FedEx runs from $430 to $525 per share.

That range seems entirely likely to me based on all available information. As such I'm intrigued enough to be shorting Jan. 19, 2024 expiration date in-the-money puts on FDX. 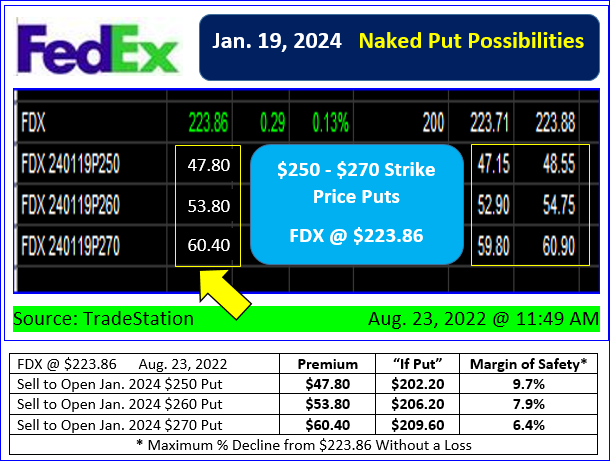 Worst-case forced purchase priced dipped to between $202.20 and $209.60, depending on the strike prices employed.

Margins of safety are not huge, as the risk of a long-term decline on FDX appears quite remote.

Potential gains, though, are very attractive. If FDX does as expected and closes above those strike prices on expiration day the maximum gains would equal from $4,780 to $6,040 per each 100-share commitment.

Future stock market action can never be guaranteed. That said, owning FDX below $210 would have been a winning over 85% of the time dating all the way back to Oct. 1, 2020 in the midst of the Covid craziness. 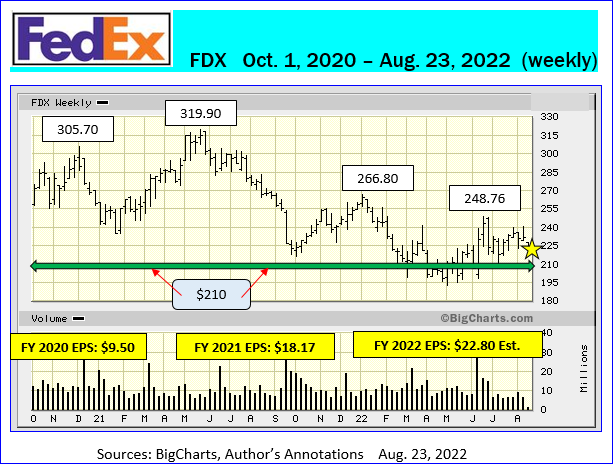 FDX is certainly worth much more today than it was back in late 2020.

Buy some shares, sell some LEAP puts or consider doing both.

Get an email alert each time I write an article for Real Money. Click the "+Follow" next to my byline to this article.
TAGS: Investing | Options | Stocks | Transportation |

Bed Bath & Beyond: A Whole Lotta Ugly But I See Something Interesting for Bulls