I don't create the market conditions, but like a baseball umpire I just 'call em as I see em'. After finishing up a strong month of April the bulls still could not manage to hold the ball. The last day of April was a nasty reversal and outside day (higher high and lower low than the previous day creating an engulfing bar). That is an ominous sign for the bulls and points to lower prices ahead, but let's step back and look at the markets from a wider lens.

Our definition of a bear market based on the technicals has been a crossover of the MACD line on a monthly chart and then a confirming bar. This is truly a long term determination of the trend but over many years has served well. The monthly chart filters out the short term noise but many of the same qualities of a bear/bull market are present on a crossover move. 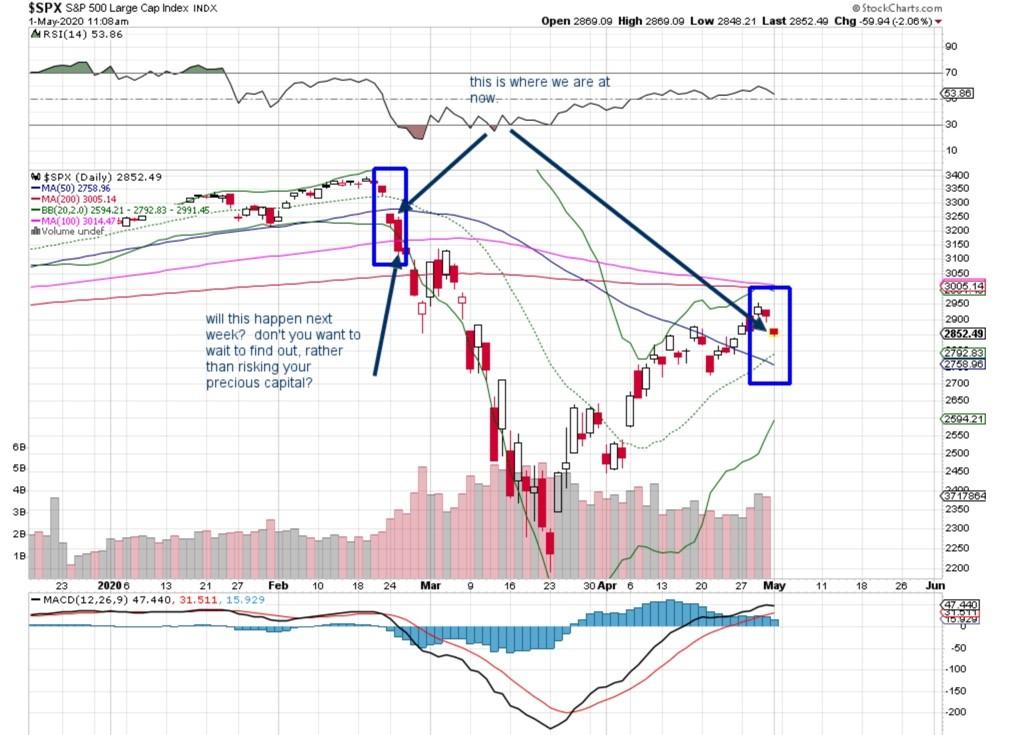 When the black (thick) line crosses below the red (thin) line, that is a bearish move. When the the black line crosses the red line above, a new bull trend has been established. After a strong start to 2020 the MACD line fell sharply in February, crossed over in March and confirmed that crossover in April. Even with the strong move up last month it still means the market is mired in a bear phase.

In case you're wondering - yes, it will take awhile to release from the clutches of the bear. A cross back over on the MACD and a confirming bar.

It's not the end of the world, though. A bull market is one that goes up, a bear market is one that does not go up. A sideways market can be considered in a bear phase; we had one of those in the mid 1970's, a very frustrating period for all. Bear markets are just a phase in a growth economy, a slowdown from a very brisk pace.

Yet this case seems very different than prior bear markets, the extent of which is completely unknown. Often market cycles help define the length and severity of a bear market, be it a recession or something not so severe.

Embrace the trend, change tactics, add protection, and hold higher levels of cash. We'll talk next week about how to survive a bearish trend.

Get an email alert each time I write an article for Real Money. Click the "+Follow" next to my byline to this article.
TAGS: Economy | Investing | Markets | Stocks | Technical Analysis | Trading

Let's check out the charts of the country's largest auto parts chain.