You might not have expected October to be the best month of 2021 for equities back in September. You knew that supply chains would cause issues. You knew that labor shortages would cause problems. You knew that higher input costs should pressure profitability, and that's exactly what happened late last week to widely held tech giants Apple (AAPL) and Amazon (AMZN) . Both opened in the hole on Friday, allowing Microsoft (MSFT) to become the most highly valued publicly traded company on planet earth.

Yet, the market, or the market for large-cap stocks more specifically, rallied on even without it's stalwarts. In fact, though lower for the day on Friday, both Amazon and Apple closed at the top of their respective ranges for the session, pulled higher by the broader market. Capital flows driving the many pulled the giants higher instead the other way around. This is, in actuality, very healthy behavior. The fact is that 10 of 11 S&P sector select SPDR ETFs turned in positive Octobers led by Consumer Discretionaries (XLY) , Energy (XLE) , and Information Technology (XLK) , in that order.

With the Nasdaq Composite up 7.3% for the month and the S&P 500 up 6.9% over the same period, it was not just discretionary types in general that led, but Automobiles, largely electric vehicle manufacturers as an industry, that led. That group has obviously featured Tesla (TSLA) . The Dow Jones US Automobiles Index scored an increase of 36.6% for October, while Tesla itself outperformed (+42.6%) the group. We'll dig in on this in just a bit.

Interestingly, it was the Communications Services (XLC) sector that alone closed out October in the red, but not left there by internet type stocks as some might expect. The anchor hanging around the neck of this sector came from the telecom and broadcasting space. The Dow Jones US Internet Index actually gained 5.6% over the month of October, despite what you may have heard.

The tale told comes from many corners this Monday morning. While equity markets have enjoyed higher prices on heavier trading volumes, thus reinforcing the rally currently in place, the threats come from many corners. The world watches as global focus on climate change shifts from a largely unproductive G-20 meeting in Rome to the already in progress Cop26 "get together" in Glasgow. Speaking on climate change, there is rumor that Democrats across both chambers of the U.S. legislature may be voting on something as early as Tuesday of this week. What exactly? We're still not sure, but it will directly impact and control the future of fiscal policy in the world's largest economy. So, this matters.

On top of that, The Fed's FOMC will decide the forward looking trajectory of U.S. monetary policy on Wednesday afternoon. Let's just say, not tapering monthly asset purchases by at least $15 billion per month going forward would be a surprise. Not the other way around. What will matter to the keyword reading algorithms that control the point of sale will be in how the message is delivered. How does one tell a nation that they are reacting to consumer level inflation that has stabilized at a more accelerated pace than previously expected without sounding panicked? That, my friends, is what "they" will be working on this Tuesday, and will likely be out in force by Friday, echoing the official message.

Of course the Fed will be sandwiched by the RBA (Reserve Bank Of Australia) and Bank of England, both of whom appear to be, along with the U.S.... preparing to take a page out of The Bank of Canada's book. Did I even mention that OPEC and friends meet this week as well, and that this Friday is October "Jobs Day" in the U.S.? No. Well, bingo.

Ahh, this also happens to be another heavy earnings reporting week. You are more than halfway through, by the way. According to FactSet, with 56% of the S&P 500 having reported, the blended (reported & expected) rate of earnings growth is now up to 36.6% (up from 32.7% one week ago) on revenue growth of 15.8%. 82% of those members of the S&P 500 already reporting have beaten earnings expectations while 75% have posted upside revenue surprises. For the new kids, these numbers are usually in the high 60% 's. The S&P 500 went out last week valued at 21.1 times forward (12 months) looking earnings.

There were minor victories for the climate concerned public. The fact remains, that few nations outside of North America or Europe are willing or able financially to take the steps necessary to try to effectively slow down the impacts of climate change. While there was a broad, vague agreement to stop financing new coal powered power plants overseas, and the U.S. and EU both hailed a new schedule of tariffs aimed at reducing carbon emissions on steel and aluminum manufacturers, the group actually stepped back from the previously mentioned target of 2050 as a year to reduce global carbon footprints in the "quite useless" communique.

President Biden openly expressed frustration with the lack of urgency shown by Russia, China in addressing their carbon footprints while also expressing some level of impatience with Saudi Arabia for not producing more oil. Only in 2021, kids. We have said this for years. While the U.S., and U.S. companies, and to a lesser degree their European counterparts, have worked toward creating a reduced carbon footprint for more than a decade now, the planet's largest polluters just have no intention of playing ball, if they can not afford to turn away from fossil fuels or if the production and sale of these fuels is a primary driver for economic activity in these nations. There is no way to correct that.

I am not saying that we, as a people should not keep trying, but I think it makes sense that we understand that globally, we will not make substantial progress until something truly awful really scares the stuffing out of the survivors. Mind you, I am a conservationist due to my experience in the wilds, but I am not your typical tree hugger. Some argue that at least a portion of the changing climates we see around the world may not be the doing of humankind. This does nothing to solve the issue at hand, and enough of the change is indeed, the result of pollution. Just saying that you might want to buy a house on a hill.

Chances are that global monetary policy tightens considerably this week and that the U.S. will not be the primary driver. This Tuesday locally (Late Monday in NY), the Reserve Bank of Australia will have to decide to either abandon or defend its program of "Yield Curve Control '' as yields violated target to the upside last Friday. The bank may walk away from the curve completely with Australian consumer prices now rising to six year highs.

The Bank of England, this Thursday... by the way, may actually go further than the Bank of Canada went last week, and like the BOC, put a halt to its asset purchasing program, but also increase short-term interest rate targets. After allowing markets to price in a rate hike in Britain after a hawkish MPC meeting in September, leadership has done nothing to talk down markets from that expectation. I think they're gonna go.

... Microsoft will hold the firm's annual "Ignite" event virtually (again) this Tuesday through Thursday. This event is a chance for the firm to showcase products and their capabilities, as well as possibly offer Microsoft partners an opportunity to showcase new hardware and/or software products that compliment Microsoft's own portfolio.

You kids looking at Albemarle (ALB) of late? Stock went out at $250.47 on Friday, up 1.75%. ALB is trading above $254 (+1.5%) on Monday morning as the wee hours pass. Known as a specialty chemicals company, the business derives a rough 37% of its revenues (at least historically) from lithium. Well, we all know what the global transition into electric vehicles is doing to lithium prices. You and I will hear more on this after the closing bell this Wednesday when Albemarle reports.

Wall Street is looking for EPS of $0.76 on revenues of $764 million. That would be an earnings contraction on revenue growth of just 3%. Not very impressive, yet the marketplace appears to be pricing in something else. 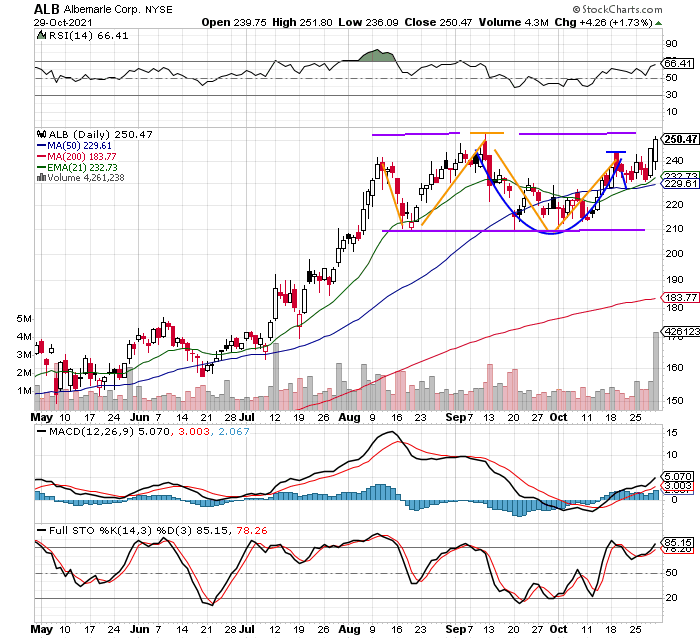 Why is my chart so crowded? Simple. I'm not sure of what I am looking at. Oh, it's bullish. I just don't know what it is. Readers will note that I have drawn a blue "cup with handle" ($244 pivot), as well as a yellow "double bottom" and a purple "base of consolidation"... both with a $253 pivot. (I think it's probably a base.)

Just thinking a little bit... If one believes that Tesla is worthy of lofty valuations and spiking technical indicators, then one probably also believes that this trend may still be in the second inning, and will also support elevated metrics for a company like Albemarle. No, I am not long ALB just yet. Thought I would let you know what crossed my mind as I did my Sunday night chart work.

(Apple, Amazon and Microsoft are holdings in the Action Alerts PLUS member club. Want to be alerted before AAP buys or sells these stocks? Learn more now.)

Get an email alert each time I write an article for Real Money. Click the "+Follow" next to my byline to this article.
TAGS: Earnings | Economy | Federal Reserve | Investing | Markets | Stocks | Technical Analysis | Trading

The Challenge of Sustained Momentum in an Illiquid Market

It would be a mistake to assume that the market recovery this time will be swift and easy.