Reflexive behavior. Oh, for joy. Another record close. For the S&P 500. For the Nasdaq Composite. How can something that feels so good, also feel so wrong? The trick to all of this is that there is no trick. Markets are pricing in a lot of unknowns. But, wait... I thought markets hated uncertainty, Sarge. Hmm, you're right. Must be something else. We have already discussed what seems to be a sellers' strike. How do I know that? Well, I don't know anything. I think a lot, though. I am a trader. Regardless of what I really think, or my own personal sentiment... I must respect above all things, the results of whatever passes in the year 2020 for price discovery.

Discipline over sentiment. Always. Put call ratios remain pinned to the bottom of those charts. The VIX? Do folks even look at that anymore? Pundits that don't name stocks? Yes, but folks with P/L's? Not really. They will again, but I doubt they have recently. I have not used anything related to the VIX as a hedge in years. Many years. Demand for U.S. 10 year paper has once again collapsed the yield curve. (Another $27 billion worth of supply hits the bond market this afternoon.) That said, U.S. stocks are no longer trading in lock step with the spread between what U.S. 3 month T-bills pay, and what the 10 year note pays. What these securities do not pay is enough to draw investment away from domestic equities.

So, what am I doing? Fair question. Still I shave my longs at my target prices. That's a matter of discipline. Have I been adding to longs, or initiating new ones? Not so much. Only in the severely beaten, like ViacomCBS (VIAC) , and that was self defense. In fact, just noticed, the number of trades that I have executed per day is down quite a bit of late, at least for equities. More options trades through. Far less inherent risk in those markets.

A bit of self introspection... what does this say about myself? That I have not been adding to, nor initiating new longs, that I have continued to shave longs at target prices, and that my day to day activity has ebbed overall, and when taking action, I have leaned into options more than equities? If I was helping someone else understand their own behavior, I would say that this individual is becoming risk-averse, as if waiting for something bad to happen. Are other traders feeling the same way? I speak for no one else, but how different can I be? That all said, we play the game in front of us. We try to excel in the environment provided. If humans once controlled the point of sale, and this price discovery is now controlled in speed measured in micro-seconds by algorithms that respond to keywords as well as technical analysis, then just how much is sentiment worth anyway? Think about that.

Both the Nasdaq Composite and the S&P 500 closed at record highs on Tuesday, but this time the margin over the prior day was just a smidge, and both indices worked their way lower throughout the afternoon. There was absolutely no fire sale though. No panic. Volume increased slightly at both of New York's primary exchanges. Equity index futures are higher overnight.

Interestingly though, trading volume continued to decline for constituent members of the S&P 500, even if the same was not true for the Nasdaq Composite. What happened there? For one, on the surface, the tech sector traded lower for a change, the (XLK) closed -0.34%. As you know this tells you very little. Within that group, the Philadelphia Semiconductor Index screamed more than 2% higher for the day, while the Dow Jones U.S. Software Index surrendered 1.24%.

As for the lower volume for the S&P 500 in aggregate, that's quite explainable as well. The rally merely spread more broadly to other parts of the equity market. While the S&P 500 closed close to where it started on ebbing order flow, both the S&P 400 (mid-caps), and the S&P 600 (small-caps) experienced increases of more than 0.7% on rising volume. What does this mean to me? Actually, this action makes a lot of sense. Why would that be?

First off, I think it made perfect sense for traders to take profits where there were the most profits to take. This, as the Federal Trade Commission made public a review of prior acquisitions made by major technology corporations, and how this activity is reported to federal anti-trust authorities. The statement names Alphabet (GOOGL) , Amazon (AMZN) , Apple (AAPL) , Facebook (FB) , and Microsoft (MSFT) . Not all of these firms saw their shares close lower on the day, but all five did see their shares selloff from where they were.

Now, go back to the S&P 500. Why would the money start moving from large cap multinationals to mid-caps and smaller caps? Why would the "smart money" expose itself more to equity with less global exposure? Anyone? C'mon, you've got this. Okay, shy kid in the back, go ahead... The Wuhan coronavirus? Not bad, You're very warm. We call it Covid-19 now, but you're right. Of course, it's not the virus itself, it's the reduction in the speed of transaction. We have discussed this often of late.

Economists have been reducing expectations for Chinese Q1 economic growth if there even will be any at all. They have also now started ratcheting down expectations for China's trading partners. All quite logical. All conjecture, really... given that hardly a soul expects Beijing to accurately report either monthly nor quarterly economic data at this point.

What we know that we do have is a near halt to air travel across Chinese borders. What we also have is a Baltic Dry Index that tells us that global commerce in terms of the transport of industrial commodities has withered tremendously as has Chinese demand, and as U.S. dollar valuations have spiked.

Yes, shy kid in the back? What's the Baltic Dry Index? Okay, very briefly (because I know some of you don't know)... this index, which is released daily, measures the demand for shipping capacity versus the supply of dry bulk carriers. It gets far more complex, based on price and size class of carriers, but basically, traders use this as a proxy for dry bulk (raw material) shipping conditions. This index is currently "up" to 418, from a low of 411 earlier this week. How does that compare historically? To put it bluntly, the low 400's are about as awful as it gets. The BDI did run below that levels for a couple of months in early 2016.

As you can see, this index is down from more than 2400 as recently as this past September. Beyond that, the index is now at less than half of its own 50 day SMA and less than a third of its own 200 day SMA. In order to drive home my point, I am going to push this chart out to 10 years.

Now, you understand the box from the other day... filled with volume that must be expanded upon exponentially in order to grow based on the laws of size and scale. There is no doubt in my mind that the IMF's current projection for growth in global GDP of 3.3% is now wildly optimistic. Wildly.

Soon, this estimate as well as a large number of national estimates for GDP will have to be revised lower. At that point, so will estimates for both earnings and sales at large cap multinational corporations. Though the S&P 500 has become less reliant on global sales as a percentage of their whole over the past three years, in aggregate, the group still has 38% sales exposure beyond U.S. borders. For the Russell 2000, this exposure has historically run at roughly 20%. Hence, broader portfolio exposure might also make sense.

"Risks to the outlook remain. In particular, we are closely monitoring the emergence of the coronavirus, which could lead to disruptions in China that spill over to the rest of the global economy."

The Fed Chair Went on

"We know that there will be very likely some effects on the United States... The question we'll be asking is: Will these be persistent effects that could lead to a material reassessment of the outlook?"

This is a rather dovish realization in my opinion. I think we all know that the FOMC in general would prefer to leave the target for the Fed Funds Rate where it is. That said, I would expect short-term repo operations as well as the $60 billion per month balance sheet expansion program to drag on longer than once anticipated. With the PBOC pouring on the liquidity, and the ECB likely in a position of weakness, committee members have to remain cognizant of, and vigilant to, potentially dangerous dollar valuations relative to peer currencies.

1) Mastercard (MA) popped on Tuesday, and then settled up small on the day, but well off of the highs. What gives? One of the first signs that even as Covid-19 slows down not just economic activity in China, but public activity as well, is that China is making some attempt to live up to at least parts of the Phase One trade agreement. Mastercard received approval in principal to begin preparations to set up a bankcard clearing institution in China that will be a joint venture with NetsUnion Clearing Corp. Actual bankcard clearing activity is likely still up to a year away, and markets overreacted at first to this news. My target price for Mastercard remains unchanged at $340, with a panic point of $279.

2) Remember iQIYI (IQ) ? Our secret weapon back in late 2018? That was awesome. Why did I even think of this name last night? Well, I was thinking about the people of China who are not sick, but must remain in place, in quarantine. Well, if you recall, this firm provides a high-quality online streaming video service with original material. Kind of like a Netflix (NFLX) or a Hulu (Controlled by Disney (DIS) ). Well, I took a look at the chart, and this one looks like it is potentially breaking out. (Psst.. it still doesn't make money.) 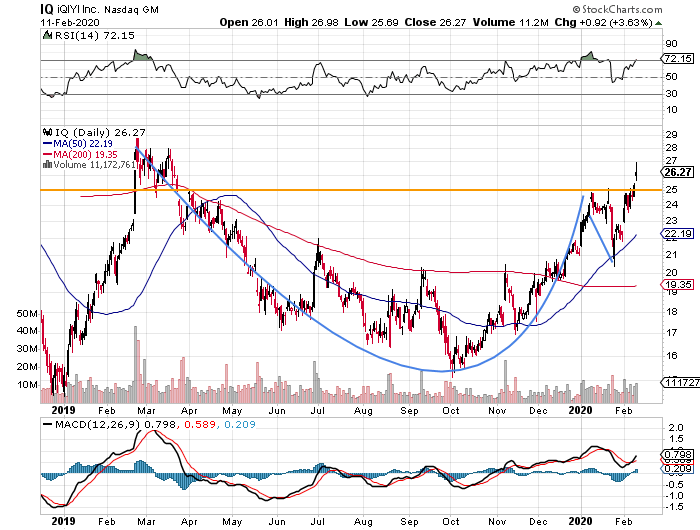 Basically, it looks like we have a stock coming out of a year long cup (saucer?) with handle pattern on an improving daily MACD and a better reading for Relative Strength. I am thinking of this as a trade, not an investment. I think perhaps a price target of $31 with a panic point of $23 might contain the risk while opening up the trader to a moderate profit. Just an idea.

Get an email alert each time I write an article for Real Money. Click the "+Follow" next to my byline to this article.
TAGS: Short-selling | Federal Reserve | Investing | Markets | Options | Stocks | Technical Analysis | Trading | China