The dictionary defines precarious as an adjective. The meaning? "Not securely held" or "dangerously likely to fall or collapse." Yeah, that's the ticket. I have been out in the desert (prior to night-vision) listening intently, trying to discern just how far away and in what direction the rattles were coming from in order to carefully place my next step. I have seen a young fellow disappear into quicksand. By the way, that can happen in a shot, it doesn't have to take a while like it does in the movies. (Yes, we got to him before he suffocated.)

The thing is that the entire world you live in is one of balance, a balance between what is certain, what is known and can be valued or priced, and what is not known, uncertain, or must be discounted. You and I arise on Monday morning coming off of a "down" week that culminated with two high volume "down" days thanks to the expiration event on Friday. Since then, the world has seemingly caught fire. We know that uncertainty around the pandemic has deepened in recent days. That is the primary driver for the weakness across Asian and European equity markets this morning that has permeated equity index futures markets here in the U.S.

Covid does not stand alone, with its thumb upon the scales of price discovery however. While at least two U.S. senators tested positive for the virus on Sunday, the transmissibility and potential severity of the Omicron variant remain question marks, while no one doubts the danger presented by the Delta variant. European nations are headed into various stages of social and economic lockdown. In the U.S., businesses are once again adjusting rules for remote-based work, and for physical commerce (Tis' the season), while professional sports leagues are changing schedules based on which teams have enough players to even field a team.

Then there's President Biden's "Build Back Better" or should we say "Build Back Never" plan. The $1.7T to $4.9T (depending on who you choose to believe) climate/education/social issues based tax and spend bill, will almost certainly not pass in the U.S. Senate this year, and probably will have a heck of a time passing next year, as Senator Joe Manchin of West Virginia, who the Democrats need, has overtly stated his opposition and any highly partisan legislation will only get more difficult to pass as the nation enters a midterm election year. On Sunday, Goldman Sachs (GS) reduced that investment bank's forecasts for the U.S. GDP over the next three quarters based on this bill's likely failure. Oh, joy.

Traders and investors can probably to some degree throw out volume based data taken from Friday's action. The trading volume around the bells on days like that only serves to skew output. That said, all of the major U.S. equity indices did come under significant pressure for most of the five day period, with a brief two hour reprieve that came in immediate response to the FOMC announcement and economic projections on Wednesday afternoon.

As Omicron potentially pressures the natural progression of economic activity, it was those divisions of the equity market most dependent upon freer trade, such as the Dow Transports, and the Energy sector SPDR ETF (XLE) , that came under the most pressure. Not to mention, also pressured were parts of the market where valuation is more dependent upon current sales growth or earnings discounted far into the future. This would include the Technology sector (XLK) , where the pain was almost evenly spread between semiconductor and software stocks. Yes, this despite the apparent pricing power that one would expect the high quality semis to have.

There were bright spots if one considers a flight to safety or a reallocation toward equities less reliant upon the business cycle for earnings to be "bright." While the flow of capital poured into the U.S. Treasury curve from top to bottom, the top four performing S&P equity sectors last week were indeed the four classified as "defensive" in nature. Health Care (XLV) , the REITs (XLRE) , Consumer Staples (XLP) , and the Utilities (XLU) , all for the most part return capital to shareholders, could suffer less at the hands of inflation, and oh yeah... all four of those sector select SPDR ETFs closed out the week up at least a full percentage point.

President Biden will speak to the nation on Tuesday. The market will try to game his reaction to the spread of the new variant. Oh, and this Thursday is a huge macroeconomic data-dump kind of day for the federal government.

Just a Heads Up

Both messenger RNA vaccines, in clinical studies, appear to offer significantly more protection against the Omicron variant than just the two dose regimen that used to be referred to as full vaccination. Though U.S. equity futures indices are still indicating an opening in between 1.2% and 1.5% below Friday's closing levels, this is well above the overnight lows and have quite overtly and positively reacted to this Moderna news.

With equity index futures feeling the heat overnight, investors need to be fully cognizant that while the S&P 500 has at least so far managed to hang on to support at the 50 day SMA... 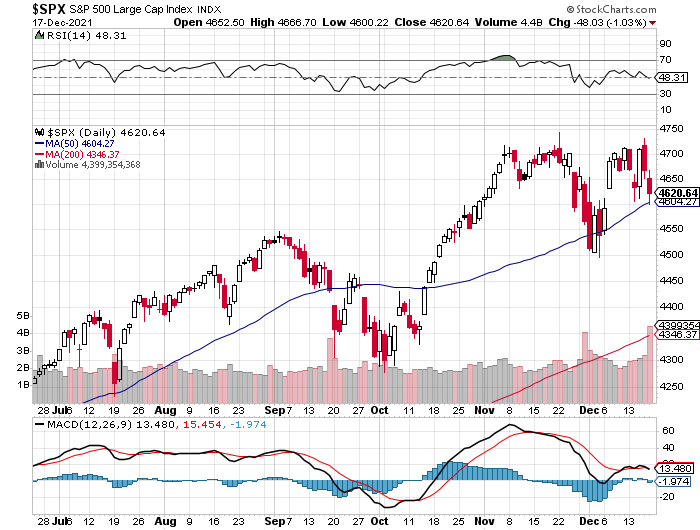 The Nasdaq Composite has lost touch with that line and could, if new support does not engage somewhere in here, threaten its own 200 day SMA. 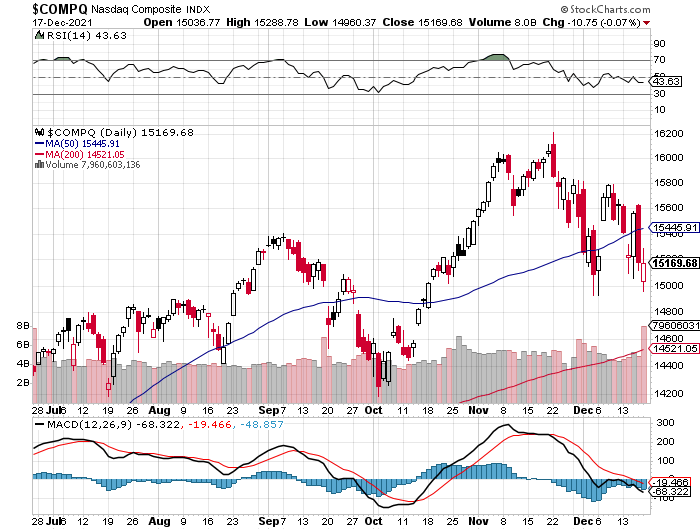 Should the Composite close on Monday below the early December lows, then this line will come into focus, as risk managers begin to harp on portfolio managers in a much more timely manner. Their contract will become much less routine and much more mission and contingency focused. This is the greatest technical threat to the overall survivability of this current leg (that has neither been confirmed as still intact or failed) of a multiyear uptrend.

Readers will see that to impact that 200 day line, the Nasdaq Composite would have to cut through the lower trend line of a channel that has held in pace since this past March.

Bear in mind that as Omicron threatens to, and will to some degree, slow economic activity, the real catalyst will be the political and policy response. We already know that some nations, such as the Netherlands, will go into full lockdown. Other European nations are trying not to go that far. What will China do? Can that economy continue to pursue its "zero-Covid" policy in this environment?

Will Omicron force an increased and unwelcome upward pressure on consumer level inflation that forces the Fed to maintain an aggressive footing on the removal of accommodation even if as Goldman Sachs suggests, the base case for economic growth is now far lower due to the failure of the president's agenda to get through the legislative process? What of the SNAP emergency monthly payments that expire at year's end? All things to think about that will impact velocity and perhaps the flexibility of policy going forward in terms of depth and duration.

We made eye contact, if just for a moment. Maybe 30 feet away. You know how dark it gets under the canopy, especially as day turns to night. It was a two man job. The other guy was sick, so I came alone. Real tough guy. Moron. Thought for a split second that this might just be it. Beautiful animal. Who thought that I could surprise? A jaguar. In his jungle? I still thank my maker that he was as afraid as I was. You know, it's odd. Every time I have had unexpected contact with wild animals capable of killing me, I have noticed their incredible beauty. It speaks to me. I speak to them. I still hate snakes.

What am I focused on? Not that I know more, or less, than the next kid.

B) Salesforce (CRM) is in peril. The stock lost and regained the 200 day SMA ($251.40) on Friday. Lose this line and lose a few portfolio managers for sure. The stock is trading below that line overnight. I may have to flip out of this name and try to flip back in later. should I see a volume-supported exodus there, I will have to act.

C) Pfizer remains on track to reach my $66 price target. I am not touching anything.

D) ConocoPhillips (COP) and Exxon Mobil (XOM) will both threaten recent support on commodity weakness this morning. XOM will also threaten that stock's 200 day line, making for me, COP the better, and technically safer name.

(Apple and Salesforce are holdings in the Action Alerts PLUS member club. Want to be alerted before AAP buys or sells these stocks? Learn more now.)

Get an email alert each time I write an article for Real Money. Click the "+Follow" next to my byline to this article.
TAGS: Economy | Investing | Markets | Stocks | Technical Analysis | Trading | Coronavirus