People look to me and say

Is the end near, when is the final day?

What's the future of mankind

How do I know, I got left behind

Everyone goes through changes

Looking to find the truth

Don't look at me for answers

Friday's half day of trading certainly felt like panic. Since then, more travel has been restricted. More cases of the Omicron variant of the SARS-Cov-2 coronavirus have been discovered in more nations. Nations such as Israel and Japan have closed their borders to all foreign travelers. People ask "Is it here?" The little voice inside the head replies "Of course it is"... without really knowing.

However, there is some hope that perhaps this variant, even if more transmissible than prior variants of the virus that leads to COVID-19, might not be quite as lethal. That hope has developed into moderately higher equity prices across Europe, higher commodity prices, elevated prices for cryptocurrencies, and of course... an overnight rebound in U.S. equity index futures. Isn't anything trading lower? Sure. Safe haven sovereign debt took an overnight breather. The US 10 Year Note has been yielding close to 1.54% all morning after going to sleep below 1.48% on Friday night.

Nothing close, so far to clawing back's Friday's losses, but the ball at least through Sunday night into Monday morning was moving in the right direction. As the WHO (World Health Organization) was classifying Omicron as a "variant of concern" the UK newspaper "The Telegraph" was reporting that Dr. Angelique Coetzee, who was the first doctor to sound the alarm in South Africa over this new variant, discussed the difference in the symptoms that she has been seeing in newly infected patients. "Their symptoms were so different and so mild from those I had treated before." Of course, we are talking about a small sample size, but Dr. Coetzee did not mention what many thought to be "common symptoms" of COVID-19, but said that many of the new patients were healthy young men of various backgrounds and ethnicities who presented as "feeling so tired."

Wouldn't a milder version of the virus be nice? I don't think nice is the correct word. I think that if there were to be a first variant that might easily evade the available and widely used COVID vaccines, that if that variant were to cause less severe illness, if true, that would be an incredibly lucky break... for humankind. Not to mention, the global economy.

Last week, scientists at Moderna (MRNA) went to work on creating a variant specific vaccine. A spokesperson for Pfizer (PFE) said the the pharmaceutical giant and its German biotech partner BioNTech (BNTX) had been preparing to adapt their current vaccine (Comirnaty) according to need, and could ship initial batches of new product within 100 days.

According to the Wall Street Journal, while Omicron does have dozens of important mutations, the spike protein still largely resembles that of the original strain of the SARS-CoV-2 virus, sharing 95% of the same amino acids. This allows some optimism that the human body's immune system might be able to recognize this variant and mobilize an effective response. If this is the case, then there would be reason to believe that currently available vaccines could prevent severe illness, even when pitted up against particularly worrisome variations.

Should there be a need, the flexibility of the messenger RNA vaccines would obviously allow their adjusted products to go through clinical trials sooner. If all went well, these vaccines could probably become available at some point late this winter or early in the spring. Obviously, adjusting adenovirus based vaccines such as those developed by Johnson & Johnson (JNJ) and AstraZeneca (AZN) would take longer.

It should be about two weeks until we at least hear something hard, though from lab testing and of course not from a clinical study, from the vaccine makers. In the meantime, I would not expect a lot in the way of economic shutdowns, at least not unless clear evidence presents that people are getting sicker. There will be less of a rush (if that's possible) to get white collar labor back on-site, and the Fed will have to take a little something off of their fastball for now.

What that means is that the Fed will have to drag their feet on the tapering of the balance sheet expansion program unless there is clear evidence that Omicron is not the threat that some fear it might be by the December 15th FOMC policy statement. Futures trading in Chicago are still pricing in a first hike in the target for the Fed Funds Rate for June 2022, and a second increase for September. That timing might be a little on the aggressive side until there is less uncertainty.

On the bright side, the S&P 500 probably needed to give up 2.3%, and the Nasdaq Composite probably needed to surrender 2.2%. Neither index is now anywhere close to being technically overbought or oversold. The small to midcap stocks did not need Friday's selloff to be sure, but that selloff did serve as a reminder that the virus will remain in charge until it does not. Of the 11 S&P sector select SPDR ETFs, only Communications Services (XLC) currently runs with an RSI (Relative Strength Index) below 30, which is the level that has historically signaled a technically oversold condition. No other sector stands below 38.

Only Technology (XLK) and Consumer Discretionaries (XLY) , currently stand with an RSI above 50, and both just barely at that. In short, there is plenty of room to the upside if the market decides that there is no overwhelming threat to either domestic nor global commerce in the offing.

According to Adobe Analytics, shoppers ran up $8.9B in sales at brick and mortar retailers on Friday, down from $9B on Black Friday 2020 when almost nobody was vaccinated. This is the first time in recorded human history (love saying that) that "physical" retail sales for that day specifically reversed from the year prior.

According to the National Retail Federation, 61% of American consumers started purchasing holiday gifts prior to the Thanksgiving holiday, and 28% of American shoppers said that they were done with their holiday shopping by early November. Just an FYI, I have not started yet.

One more tidbit of information. Given that national chains such as Walmart (WMT) , Target (TGT) , Macy's (M) , Kohl's (KSS) , Dick's Sporting Goods (DKS) , and Best Buy (BBY) were all closed on Thanksgiving Day, according to Sensormatic Solutions, visits to brick and mortar retailers contracted some 90.4% on the holiday itself.

There are a couple of potential market moving events scheduled for this week in addition to this being November "Jobs Week" and the absolute plethora of Fed speakers that will be jammed down your throat ahead of the FOMC December 4th through 15th blackout period.

First up will be Amazon (AMZN) , with the kick-off later today, of their "re:Invent 2021", which runs through Friday. OPEC+ will also hold an official meeting this Thursday, which will garner some additional attention, both in the wake of President Biden's SPR release as well as what impacts the new variant of the virus might have on production schedules.

This week, Zscaler (ZS) reports on Tuesday evening with both CrowdStrike (CRWD) and Okta (OKTA) reporting the next day. Long-time readers know that I have long been on the Zscaler bandwagon and that this has certainly paid off. Some are probably wondering... "How about now?" Good question.

While Zscaler trades at an absolutely nosebleed valuation, the fact remains that the business has grown consistently and will continue to do so. Expectations for the firm's fiscal first quarter are for EPS of $0.12 (whispers are slightly higher) on revenue of $212M (+49% y/y). The stock is 105 off of its mid-November high, at last check, had a balance sheet that I was happy with (current ratio of 2.6), and was growing both calculated billings and deferred revenue at a 70%+ clip. Oh, and 9.4% of the entire float is held in short positions. Not exactly an ape target, but enough to rattle some cages if the stock regains its footing. 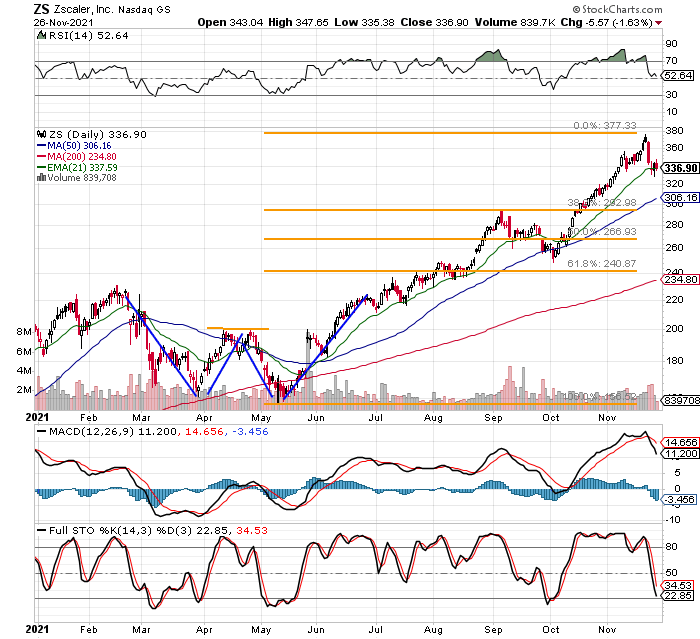 As readers will clearly see, the stock is still extended, but no longer technically overbought. In fact, the Full Stochastics Oscillator is getting pretty close to calling ZS "oversold." I can not show you on this model, but a 23.6% retracement of the "double bottom" lows from May through the November peak would kick in at $325. (Just an FYI... 23.6% and 78.6% are both Fibonacci levels, though less commonly used than are 38.2% and 61.8%. I use them. I just cannot show them using this model.)

I trade Zscaler, but I always have a core long position. This is my favorite cybersecurity name, but I do caution that this is a high risk/high reward name. My second favorite name in the space (because you were going to ask) has been CrowdStrike. I do not have a core position in that name, but it has proven to be an awesome trading vehicle.

- Target Price: $450 (possibly the highest on the street)

(Walmart and Amazon are holdings in the Action Alerts PLUS member club. Want to be alerted before AAP buys or sells These stocks? Learn more now.)

Get an email alert each time I write an article for Real Money. Click the "+Follow" next to my byline to this article.
TAGS: Economy | Investing | Jobs | Markets | Stocks | Technical Analysis | Trading | Retail | E-Commerce | Coronavirus