It's only been about two weeks. I know because the name, Nvidia Corporation (NVDA) is one of my long time favorites, and I think about, write about, and trade the stock often, without ever going flat, mind you. There's always a core long position in this name, as there is in another chip fave, Advanced Micro Devices (AMD) . Funny that Nvdia CEO Jensen Huang and Advanced Micro Devices CEO Lisa Su would be cousins, isn't it?

Back on August 19th, Nvidia reported a terrific second quarter, crushing expectations not just for the data center, or for gaming, but across both of these leading business units as well as in general. In our columns, we had expressed an intent to cut loose a few shares just ahead of the numbers (just below $500), and then we told readers that we felt a need to repurchase those shares the next morning with the shares trading around $480, expressing doubt that out $450 target to the downside (or from price of $410) would in fact be hit. That was fortunate, as the shares ventured below $475,and then it was off to the races based upon the firm's third quarter guidance.

After earnings, there was nothing to look forward to beyond the highly hyped September 1st (yesterday) GeForce special event. Shazam. You may have noticed the shares trading higher this week and this morning.

On Tuesday, Nvidia unveiled its Ge Force RTX 30 Series GPUs, which are based upon the Ampere architecture. There will be three GPUs in the series and the series will utilize Nvidia's second generation RTX PC gaming platform for real-time ray tracing and artificial intelligence. The new series that will offer two times the performance as well as 1.9 times the power efficiency over the previous generation (which was based on the firm's Turing architecture) and will be available successively this September 17th, 24th, and then in October.

Response from Wall Street has been overwhelmingly positive. I have noticed since Tuesday evening that at least nine five star rated (by TipRanks) sell-side analysts opining on NVDA. All nine have either placed or reiterated "buy" ratings (or their firm's equivalent) on the shares. Probably, the most notable among these was Bank of America's Vivek Arya, who increased his price target from $600 to $650. Among several comments, Arya is of the opinion that these new Ampere based cards could "drive a solid replacement cycle" for a rough 75% of Nvidia's deployed base. 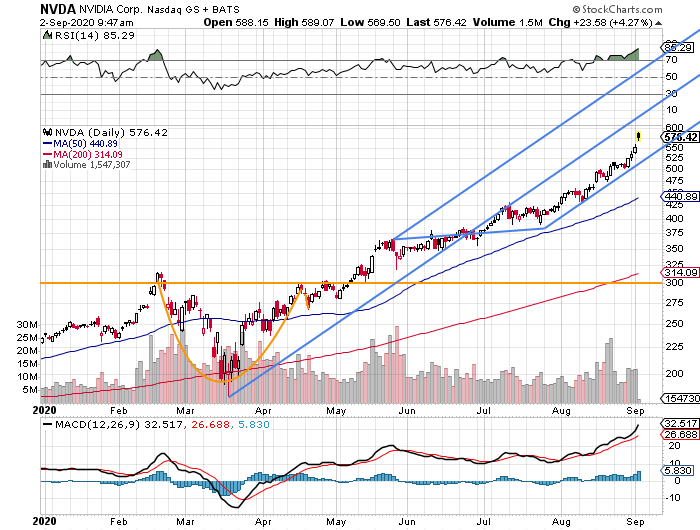 FYI, over the weekend, my price target for NVDA was still $535. Guess that's about to change. Readers will note that even with this Wednesday morning pop, which was built upon a Tuesday pop that was built upon a Monday pop, that the shares do not really approach the central trendline of what looks like an unsustainable Pitchfork model.

Is the slope of this trend unsustainable? After what we have seen across the tech space? Apple (AAPL) ? Tesla (TSLA) ? Salesforce (CRM) , Crowdstrike (CRWD) ? Zscaler (ZS) ? I don't doubt anything anymore, nor does anything surprise me. Arya's $650 target seems aggressive for now. This is a name where I may have to bend my own set of core disciplines just so that my core position retains a decent level of portfolio exposure.

How about this. Based on the Pitchfork, I am taking my target up to $625. Panic Point? Let's go with the 50 day SMA at $40. Even there I think most of the long crowd will still boast six figure (percentage terms) profit.

Long NVDA? Wanna make a few bucks at reduced perceived risk? The market on Wednesday morning still pays $2.25 for September 4th $600 calls. Think about that while the shares trade with $564 handle. Easy money? You never know, but you will get paid.

(NVDA, AMD, AAPL, and CRM are holdings in Jim Cramer's Action Alerts PLUS member club. Want to be alerted before Jim Cramer buys or sells these stocks? Learn more now.)