The Hills Are Alive

How do you solve a problem like Nvidia (NVDA) ? The name nearly brings up the tail end of every earnings season. After Thursday's closing bell, traders, investors and spectators will wait on Nvidia to post their Q3 results. Then, they'll wait some more for the Jen-Hsun Huang conference call. Now... let's dig in.

First, the stock has traded wildly up and down, mostly down since the broader markets came under fire in early October. Through the course of that terrible month, this stock traded as high as $292.76 and as low as $176.01, a mere top to bottom move of 39.9%. For today, Wall Street is looking for EPS of $1.71 on revenue of $3.24 billion. Whispers are running above consensus for EPS, but I expect that outlook will rule the day more than will results.

The entire semi-conductor/high-tech space has come under pressure as ongoing trade conflicts have caused margin pressure concerns, Doubts over the trajectory of Global and in particular Chinese economic growth have caused concerns as well over pricing due to oversupply as much as waning demand.

An exclamation point has been placed on these concerns as firms like Seagate Technology (STX) , Advanced Micro Devices (AMD) , and Western Digital (WDC) , while not precisely in the same business lines have rattled the marketplace with disappointing results.

For Nvidia's investors the keys tonight will be performance/outlook for segments such as gaming, and the data center. Gaming has been the firm's long time bread winner, but we have all seen the gaming software producers fall off of a cliff in recent weeks. We need to hear something positive on the firm's new Turing GPUs that may actually be too advanced for their market, and we need to see growth in this one space from Q2's $1.81 billion. Anything less, or close, will disappoint traders.

As for the data-center aka "the cloud", this is where growth absolutely needs to show it's ugly face. This has been the firm's up and comer, and is coming off of a Q2 that produced revenue of $760 million. Turing GPUs will matter here as well, and I think we need to see a "blow away" number for the data center, or the algos will get nasty in after hours trading. What do we need? Is $825 million too much to ask for? I hope not, especially if gaming pulls a hamstring.

Professional Visualization, Automotive, and OEM & IP all combined to contribute $552 million worth of revenue last time around. OEM & IP were about $110 million of that, but the firm already told us not to expect much of a contribution from crypto-currency related businesses, so my hope is that Automotive steps to the plate in a big way.

What if NVDA misses expectations? What if the firm guides lower? Wall Street expectations are only for 4.9% revenue growth for Q4, assuming that Q3 expectations are accurate. On that, the odds of aggregate accuracy on something like this are near zero. As of Wednesday, and please remember that these are moving targets, options markets were pricing in nearly a 10% move on these earnings, or something close to a $20 knee jerk either way. The pricing of related options has been as volatile as the underlying security itself. One has to wonder just how much ugly has already been priced into the stock, and just what kind of picture CEO Huang paints for the future. Game on. 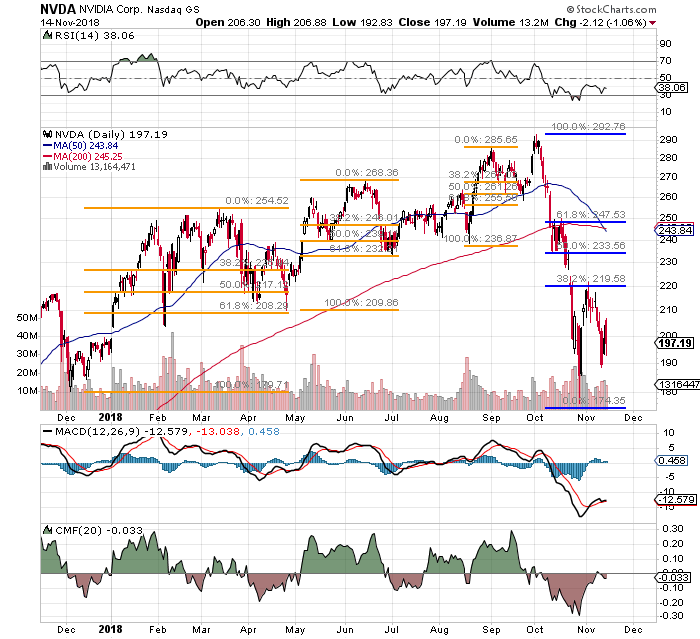 The first thing one notices when taking a look at this chart is that despite the extreme volatility, that the name obeys Fibonacci levels. What does that mean. It means that on a simplistic level, we kind of know what enough of the kids hired to write these algos for the bigger funds are looking at. Don't worry. They don't read stuff like mine. In fact they don't read anything beyond the New York Daily News at all. In fact half of them don't know what the market did yesterday, but they do know how the Knicks did. Relative Strength, the daily MACD, and the Chaikin Money Flow all seem slightly biased to the negative.

You already know I am wearing a long position going into earnings. While I did take something off at my original target of $290 in early October, my intent at that time was to go higher with the rest. I had to take more off as the name sailed past my original panic point of $240. The importance of having a disciplined system for trading your positions in place before necessary can not be stressed enough. The very last thing any trader needs to have is an emotional reaction to a pressurized situation. I have since had to rely upon swing trading as each day offered limited opportunity at some point. That said, how do I go into earnings tonight? Let's figure this out.

"Not For The Timid" Trade Idea (minimal lots)... may have to adjust prices after publication.

2) Should the equity spike move to the upside significantly, this trader will see the shares called away at $210, resulting in a net profit of $9.35 or 4.7% in 24 hours time.

4) Should the shares fall below $180 by Friday (tomorrow), the trader is committed to purchase 100 shares at $180. This could be dangerous, no doubt, but the trader has still mitigated the risk on this downward move to the tune of $17.50, which has been extracted form the trade.