Nvidia (NVDA) reported the firm's third quarter financial performance on Wednesday afternoon. The results were in my humble opinion, just fantastic. Again. These guys, to put it quite simplistically... are killing it. For the period ending October 25th, Nvidia posted adjusted EPS of $2.91,which beat the street by a ton. The firm generated $4.73 billion in revenue, which was also a beat. That's 65% earnings growth on 57% sales growth for those at home keeping score. Adjusted gross margin hit the tape at 65.5%, year over year expansion of 140 basis points, while adjusted net income landed at $1.834 billion, up 66% over last year and up 34% sequentially.

Remarking on the quarter, CEO Jensen Huang said, "Nvidia is firing on all cylinders, achieving record revenues in gaming, data center, and overall." He added, "The new Nvidia GeForce RTX GPU provides our largest-ever generational leap and demand is overwhelming."

Gaming is still the firm's largest business, contributing an already mentioned record $2.27 billion in revenue to the whole, up 37% year over year, and well above consensus. Notably, gaming quality laptops have now as a consumer product posted 11 straight quarters of double digit sales growth.

Hitting records as well was the Data Center, as that unit pitched in $1.9 billion in sales, annual growth of an incredible 162%, and also beating industry expectations. This is where the acquisition of Mellanox has been so crucial. Mellanox is almost solely responsible for about a third of this unit's revenue generation. Together, gaming and the data center combined to contribute $4.17 billion toward the $4.73 billion quarterly total for the entire firm mentioned above, so everything else is much smaller.

Among those smaller platforms, Professional Visualization printed sales of $236 million, OEM (original equipment manufacturer) & Other pitched in with $194 million, while Automotive kicked in $125 million. Of these three smaller businesses, Professional Visualization and Automotive continue to show fairly severe year over year declines as they have not benefited as have other parts of the firm due to the conditions created by the public health crisis. However, all three of these platforms did show quarter over quarter growth, and all three also managed to beat the consensus view.

The firm is now guiding fiscal Q4 revenue toward $4.8 billion, operating expenses of $1.1 billion, and an adjusted gross margin of 65.5%. Wall Street had been down around $4.4 billion on the revenue number. This current guidance on sales and margin, while factoring in various internal segment specific projections, will imply an adjusted EPS of $2.79, well above the average expectation of 30 sell side analysts covering the name of $2.55. Oh, and not much mention was made of the pending acquisition of Arm Holdings from Softbank (SFTBF) other than to basically say that there is a regulatory process to get through and that they are working on it.

To put Nvidia in perspective we must zoom out and acknowledge what this stock has done since June 2019.

Here readers can see that NVDA has simply been a beast for a year and a half, but performance has flattened over the past three months. Let's zoom in and take a look at that. 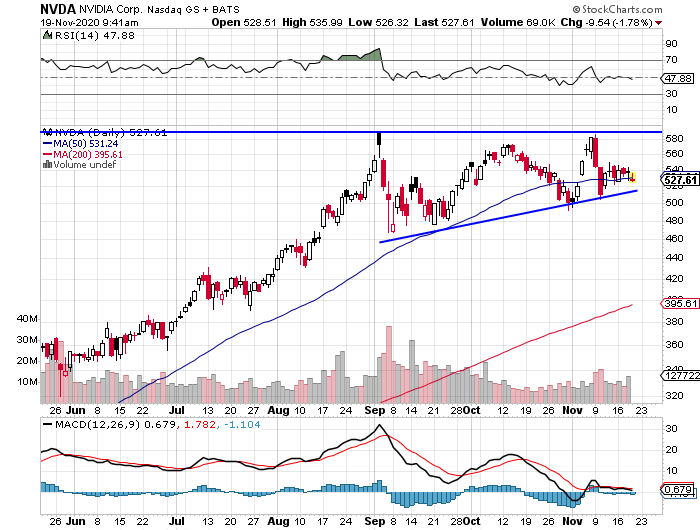 You possibly have here a basing period of consolidation. You also can see a series of consistently higher lows that began in early September. Both of these patterns could potentially provide for a bullish outcome with a pivot of $589, so still a long way off.

That said, I have more confidence in an "Ascending Triangle" than I do in a "Consolidation" or a "Flat Base", so I am rooting for support here close to the 50 day SMA as this would lend credibility to my preference. Is it time to take profits in NVDA? Sure, but you know what, every time I take profits in NVDA, I either end up paying more to buy them back (one time it really did work, I swear), or I just go about my business with a few less shares in inventory.

I am going to change a few things...

Target Price: $670 (reiteration)... this is conservative.