Next week, it would have been all about earnings. This week, it was supposed to be all about Nvidia (NVDA) . Events in Washington, DC... as well as around various hot spots around the country are central now to everything else. The president's diagnosis, the diagnosis of several in his inner circles, and all while negotiations go on and on and on regarding fiscal policy. Political? As in all things. Either the Democrats don't want to hand a president trailing in the polls a victory that could swing some votes, or the Republicans perhaps reading the handwriting on the wall, don't want to help pass something that would likely not show up in the economy until maybe the other side would take the credit. Like I said, this should have been Nvidia's week. My target price had been taken up to $625 from $535 on September 2nd. The shares topped out at $589 that day, then sold off hard. Now, NVDA climbs the mountain yet again. Is $625 still good?

We went over some of this in less than highly detailed fashion this morning in Market Recon. I had really thought that perhaps the firm would wait until later this week to reveal some of these plans as CEO Jensen Huang and Arm Holdings CEO Simon Segars are scheduled to appear together this afternoon through Thursday.

Instead, Nvidia announced a three year plan that includes both the new BlueField-2 DPUs (data processing units) and DOCA programmable data-center "infrastructure on a chip" architecture. The firm has a number of deals in place involving either AI for software partnerships or cloud support with the likes of VMware (VMW) , IBM (IBM) , and Microsoft (MSFT) .

Some of this stuff is so far over my head that I will have to read TheStreet's Eric Johnsa's coverage if and when he goes there. What I do know is that Nvidia is still digesting Mellanox, and that deal seems to be highly accretive. I also know that wherever the cutting edge is, I will get there in an hour, and Nvidia has already been there for two. There can be no doubt that this firm, the elite of the elite in this space had already dominated gaming, already had built a lead in artificial intelligence, and is being overtly aggressive in its approach to the cloud/data center arena.

The risks are real. A slower economy brings with it a slower business cycle, and a less engaged consumer. There is always the risk that the competition either gets back in the game or starts catching up. Huang's cousin, Lisa Su at Advanced Micro Devices (AMD) , runs a very nice operation, and can you really ever count Intel (INTC) out? I might not own those shares, but I would not underestimate Bob Swan. 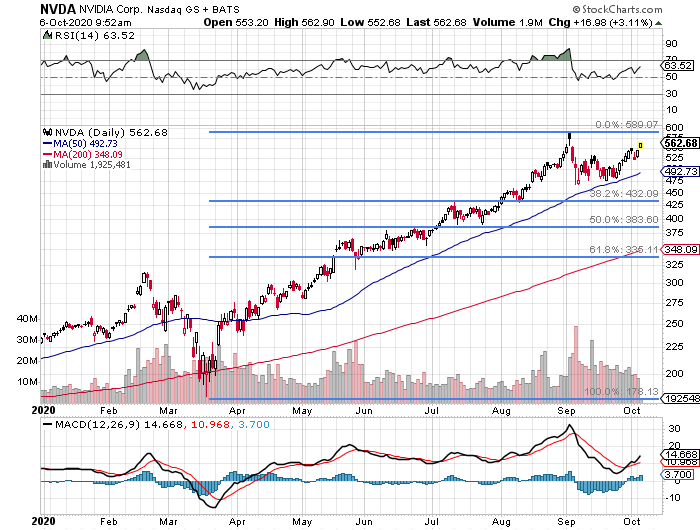 Readers will note that the shares have clung more to the 50 day SMA than they have to our old friend Fibonacci when feeling around for support. In fact, it's almost as if the shares were being traded by algorithms or something. Let's zoom in. 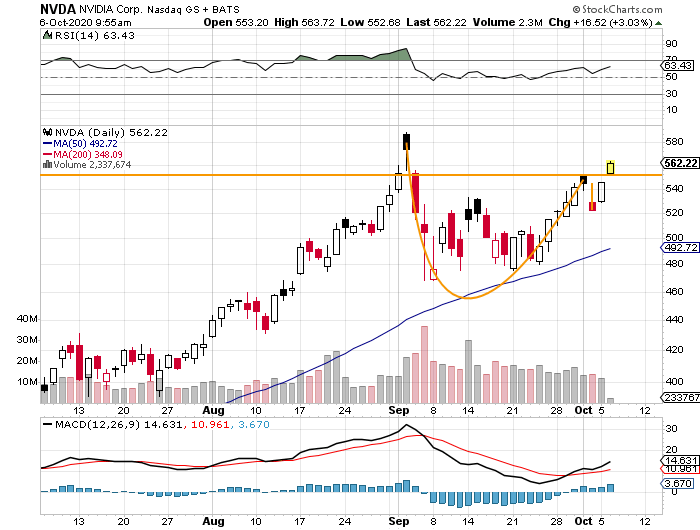 If one focuses on September, there is a short-lived cup with a handle pattern visible that leads to this Tuesday morning gap higher off of a $546 pivot. Should the breakout frim support upon a retest, then it becomes very likely if one could put political risk aside that technically $625 might be too low a target. The problem for a firm like Nvidia should there be a "blue sweep" next month would be exposure to increased taxes of internationally generated revenue. That would be in addition to a rush of investors looking to pay this year's rates on capital gains taxes. That particular negative impact will not be particular to Nvidia but would likely impact every single name that has had a good year. Speaking technically, I see reason for a price target of $655. Unfortunately I do not know how yet to handicap the political risk.

I have noticed nine sell-side analysts, rated at either four or five stars, that have opined in some way on Nvidia since Monday. All nine rate the shares as either a "buy" or their firm's equivalent. Eight of the nine have target prices. The average of those targets is $625, with a high of $700, and a low of $575. I own it. I will continue to hold it. I would not sell it. For the uninvested who are interested, I would think small ball. Incremental entry. Wait for a $546 re-test. But, that's just my opinion.

(Nvidia, Microsoft and Advanced Micro are holdings in Jim Cramer's Action Alerts PLUS member club. Want to be alerted before Jim Cramer buys or sells these stocks? Learn more now.)