Nvidia (NVDA) didn't just deliver a solid quarter, they blew the doors off expectations. The worries from the fall of 2018 are tucked safely into bed. The worries about crypto-mining weighing on current and future sales no longer exist. The one remaining worry for the stock is the coronavirus. As the gaming business draws around 30% of its overall revenue from China, there are concerns that the company's $100 million anticipated hit from the impact of the virus in Q1 may not be contained only to Q1. However, given management's guidance for Q1 is revenue of $3 billion-plus-or-minus 2% against estimates of $2.85 billion, the company appears in solid shape.

Fourth-quarter revenue of $3.11 billion breezed past estimates of $2.97 billion while earnings per share of $1.89 crushed the $1.67 Wall Street consensus. The big beat for the company centered around data centers. Revenue jumped 33% quarter-over-quarter to just under $1 billion. This is a significantly bigger piece of the pie than most folks, including me, anticipated seeing from this part of the business this quickly. AI continues to gain influence, and ray tracing for graphics is seeing solid adoption. As virtual reality and cloud gaming continue to grow and expand, Nvidia stand to benefit. For now, I would expect data centers to carry the burden of growth, and to carry it well.

In a quick pre-earnings look yesterday, I outlined the following:

With the stock higher by 7.6% as of writing, with a peak gain of 9.25% earlier, the market underpriced today's expected move, but not grossly. I'll call this falling in line with expectations.

The technical trend proved correct here while the up move bucked the recent historical trend. 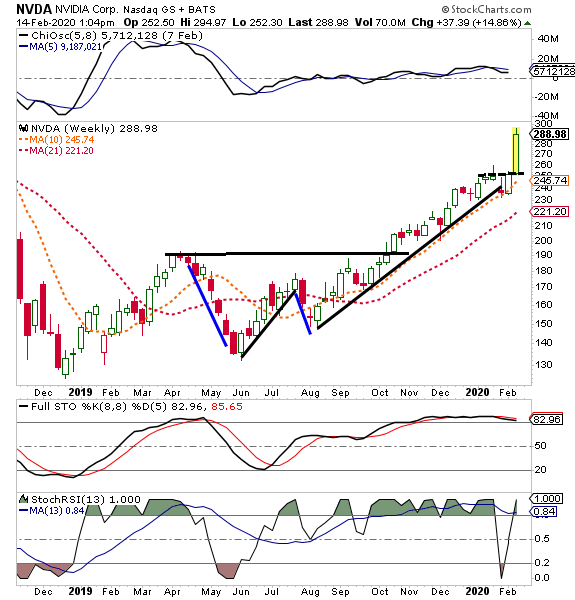 Not much has changed on the weekly chart from the view yesterday. Price remains strong, the secondary indicators remain overbought, and bears are in a tough position. I do anticipate some consolidation between $270 and $300. This week's breakout really completes the push higher from the two months of recent consolidation. That said, until we close under $255, bulls are still very much in charge, and the trend points much higher. At least 18 (yes, 18) analysts raised their price target on the stock this morning. All of those ranged from $290 to $350 with one outlier at $235. That last one is from Nomura who previously had a target of $200. It's safe to say they've been on the wrong side of this one since shares broke out higher in October.

As with so many names in this market, ride it higher until the market or the company give you a reason to exit.

Get an email alert each time I write an article for Real Money. Click the "+Follow" next to my byline to this article.
TAGS: Earnings | Investing | Stocks | Technical Analysis | Trading | Semiconductors & Semiconductor Equipment | Technology Hardware & Equipment | Stock of the Day