Nucor Corp (NUE) is having a great year. Nucor is also having a great quarter. The shares are trading lower this morning. Nucor got caught up in some producer level inflation that put the squeeze on margin in one part of the business that will turn an absolutely fantabulous quarter into a merely terrific, record setting one. The problem perhaps would be that the fantabulous numbers were already priced in.

On Wednesday morning, Nucor, which happens to be the largest steel producer in the United States and largest metals recycler in North America, issued downside guidance for the firm's fourth quarter profitability. The firm now sees Q4 EPS at $7.65 to $7.75, versus an average expectation of the 10 sell-side analysts covering the stock of $7.95 that includes a low of $6.70 and a high of $9.37. FactSet shows a Wall Street consensus of $8.18 for this line.

Even at the midpoint of $7.70, this would be a record quarterly result for Nucor, topping the $7.28 recorded for the previous quarter (Q3 2021). $7.70 would also be good for year over year growth of 497%. In addition, revenue generation is projected at $10.6B for the three months, which would amount to annual growth of 100%. Simply put, Nucor is having as they say in baseball.... a career year.

Nucor runs their business through three major segments: steel mills, steel products, and raw materials. The thesis for investors is that the broader steel industry (and for that matter, Materials sector) is still in the midst of a multi-year cycle of rising prices and increased demand coming out of the pandemic. Nucor is expected to be a major beneficiary of Washington's infrastructure package.

1) "Steel Mills segment earnings in the fourth quarter of 2021 remain robust and are expected to be comparable to the third quarter of 2021 despite lower volumes caused by year end seasonality."

2) "We expect the Steel Products segment to generate increased earnings in the fourth quarter of 2021 as demand in non-residential construction markets remains strong."

3) "Raw Materials segment earnings are expected to decrease in the fourth quarter of 2021 as compared to the third quarter of 2021 primarily due to margin compression at our direct reduced iron facilities."

Nucor trades at just five times forward looking earnings, six times trailing earnings, one time trailing sales, and 2.4 times book. By those metrics, this stock is dirt cheap. Let's dig in. As of the end of the third quarter, the firm's cash balance (cash, equivalents, and short-term investments) was down more than $1B from the quarter prior. That said, accounts receivable and inventories were both considerably higher, so at least we know where that money went. Current assets are nearly three times current liabilities, where only accrued expenses experienced any meaningful appreciation. Total assets are more than double total liabilities less equity. Long-term debt, though large enough, is down materially, and now at it's lowest level since April 2020. The firm stands with a current ratio of more than 2.5, and a quick ratio of more than 1.25, which is impressive, especially considering the inventory intensive nature of this business. Nucor's balance sheet, in my opinion, is in pristine condition. 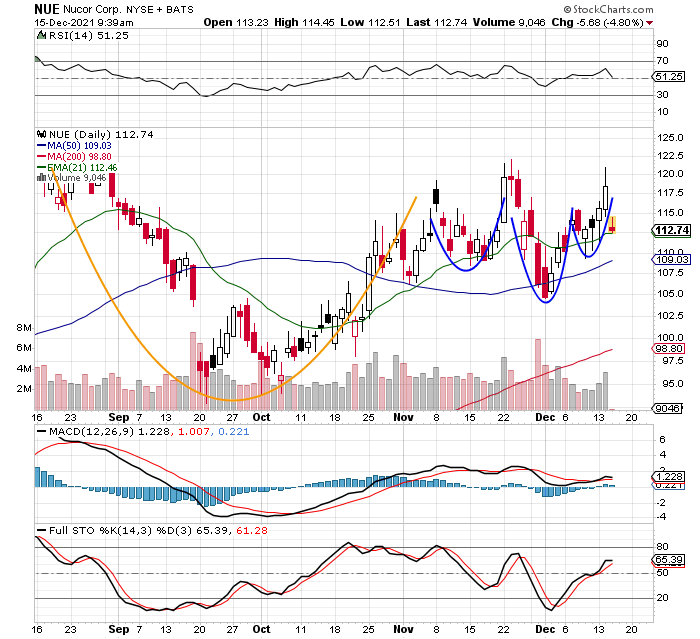 I left the orange "cup" on this chart in order to illustrate a cup pattern that I thought I saw developing for an article that I worked a little ways back, but never submitted. I show this not to show that the cup may have produced a handle, but not a breakout, but to show you something else. I think I see a mini (six weeks) inverse head and shoulders born of what would have been that cup's handle.

Despite the news of the day, and the stock's reaction, this would be a very bullish signal. The stock is cheap, returning capital to shareholders, operating at a high level, staring at a fiscal policy induced catalyst, and fundamentally strong. Not only do I want to buy this stock on this dip, I am angry that I am writing this piece, because now I have to wait for its publication before I can take action. I am sitting on cash (Remember, I did tell everyone both on air and in print to get skinny after Thanksgiving through the third week of December, as I was more comfortable as a trade than an investor right now.) and this is someplace I do want to place some of that green stuff.

(Nucor is a holding in the Action Alerts PLUS member club. Want to be alerted before AAP buys or sells NUE? Learn more now.)

Get an email alert each time I write an article for Real Money. Click the "+Follow" next to my byline to this article.
TAGS: Earnings | Economy | Investing | Stocks | Technical Analysis | Trading | Metals & Mining | Industrials