According to Goldman's analyst, the good news is already baked into the share price. But Cramer noted that shares are already down 20% from their August highs, which has "baked out" all of the good news.

There's still a lot that could go right for Nucor. The company's steel is still in high demand for autos and pipelines and that's not even counting the possibility of infrastructure spending from Washington.

Nucor is also buying back stock and returning capital to shareholders, all of which makes Nucor best in show.

In our September 21 review of NUE we wrote, "Dust yourself off and repurchase NUE again but risk to $89 now. Our price targets remain the same for now." Let's check on the charts again.

In this updated daily bar chart of NUE, below, we can see a positive picture. Prices made a low in September and a recent retest of the low. Notice how trading volume was lighter on the retest? Even though the On-Balance-Volume (OBV) line made a new low for the move down, the daily turnover dried up and that suggests that bears were not pressing on the stock.

In the bottom panel is the 12-day price momentum study which shows a low in September and a higher low in October even though NUE reached the same price levels. The pace of the decline has slowed and this is a bullish divergence - price is doing one thing while the indicator is doing something different.

In this weekly Japanese candlestick chart of NUE, below, we see some subtle positive developments. In recent weeks we see a trio of lower shadows telling us that traders are rejecting the lows.

In the middle of September the weekly OBV line is turning flat which suggests that the aggressive selling is drying up.

The slow stochastic indicator (an overbought/oversold indicator) is turning up from a weekly oversold reading.

In this daily Point and Figure chart of NUE, below, we can see that a trade at $100 or maybe $102 will likely turn the chart bullish. 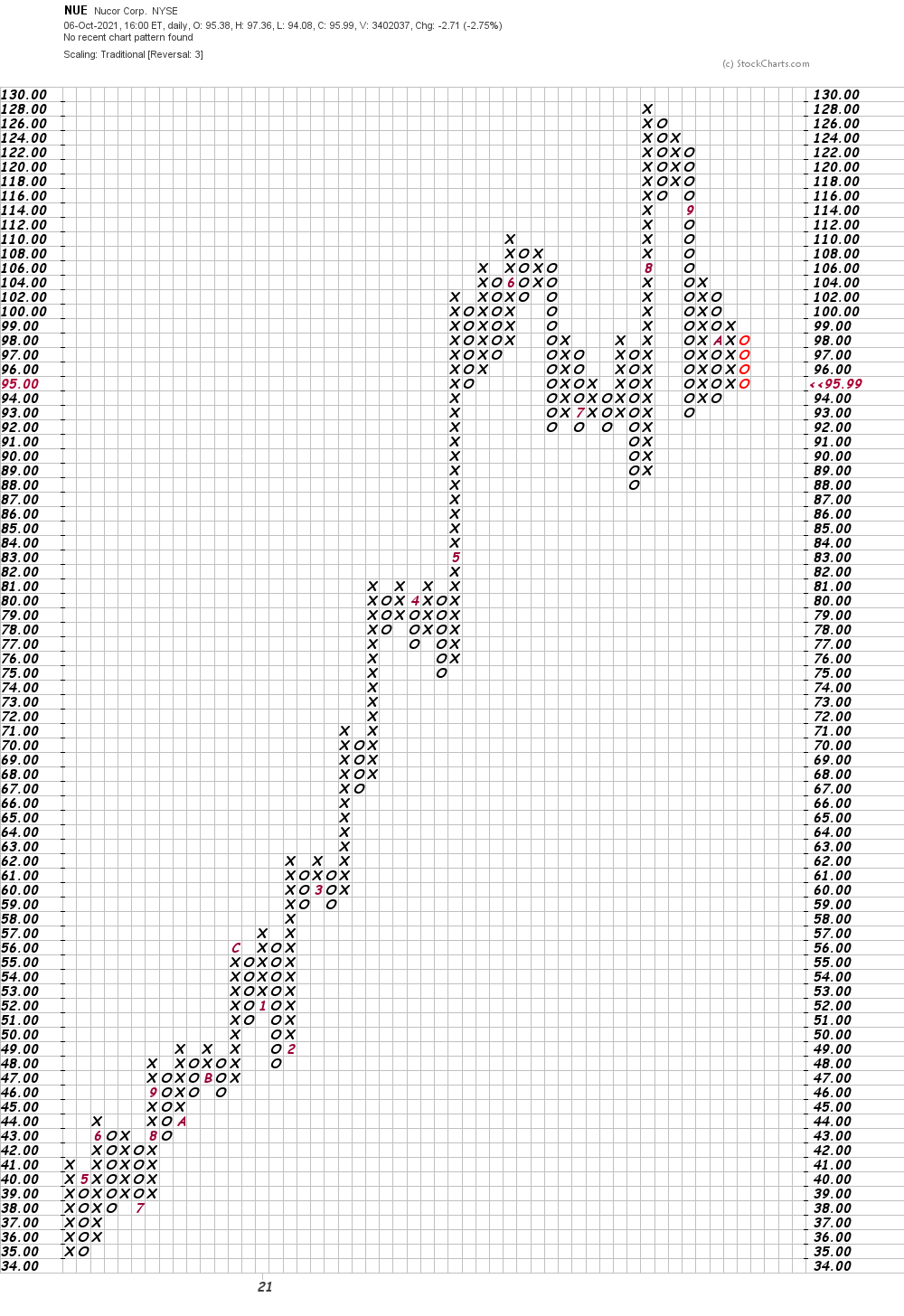 In this weekly close only Point and Figure chart of NUE, below, we used a five-box reversal filter. Here the software shows a possible longer-term price target of $343.

I included this chart so the $343x price target from the Point and Figure chart (above) is not so far-fetched.

Bottom line strategy: Traders who bought NUE last month should continue to hold with the same $89 stop. Aggressive traders could add to longs above $102. $143 and $180 are our price targets for now. Goldman Sachs may have a technical analyst somewhere in the firm but I doubt they will weigh in on NUE.

Get an email alert each time I write an article for Real Money. Click the "+Follow" next to my byline to this article.
TAGS: Investing | Stocks | Technical Analysis | Trading | Materials | Metals & Mining | Industrials | Mad Money