For his "Executive Decision" segment of Mad Money Tuesday night, Jim Cramer spoke with Vasant Narasimhan, CEO of Novartis AG  (NVS) , the drug maker with shares up 7% for the year, as some democratic presidential candidates call for a single payer model and "Medicare for all".

Narasimhan said the U.S. remains an ecosystem of incredible innovation and he's not advocating wholesale changes to the system but rather smart reform to balance the distortions. He said many medicines are given on a chronic basis but with new therapies, some diseases can be cured in a single dose, which means new payment plans and outcome-based treatments need to be considered.

Novartis is leading the charge in Washington to help Congress and regulators begin thinking about these new treatments and new models.

Turning to the business of NVS, Narasimhan noted that his company has 26 potential blockbuster treatments in its pipeline, but it is still committed to spending $9 billion on R&D. Let's review the charts and indicators this morning.

In this daily bar chart of NVS, below, we can see that prices have traded higher the past 12 months but the path has not been easy with many corrections along the way. Prices tested the rising 200-day moving average line at least five times since last August.

Volume has increased since August and the daily On-Balance-Volume (OBV) line shows a bullish uptrend until early April.

The Moving Average Convergence Divergence (MACD) oscillator is above the zero line for much of the last year but it too has weakened recently.

In this weekly bar chart of NVS, below, we see a bullish pattern to the indicators until the last two months. Prices are above the rising 40-week moving average line but the line was briefly broken in April.

The volume pattern shows increasing volume until the last three weeks and the weekly OBV line shows a peak in March.

The weekly MACD oscillator could go up or down from here with the two moving averages that make up this indicator directly on top of each other.

In this Point and Figure chart of NVS, below, we can see an upside price target of $106 being projected, but a trade at $85.59 is needed to refresh the rally. 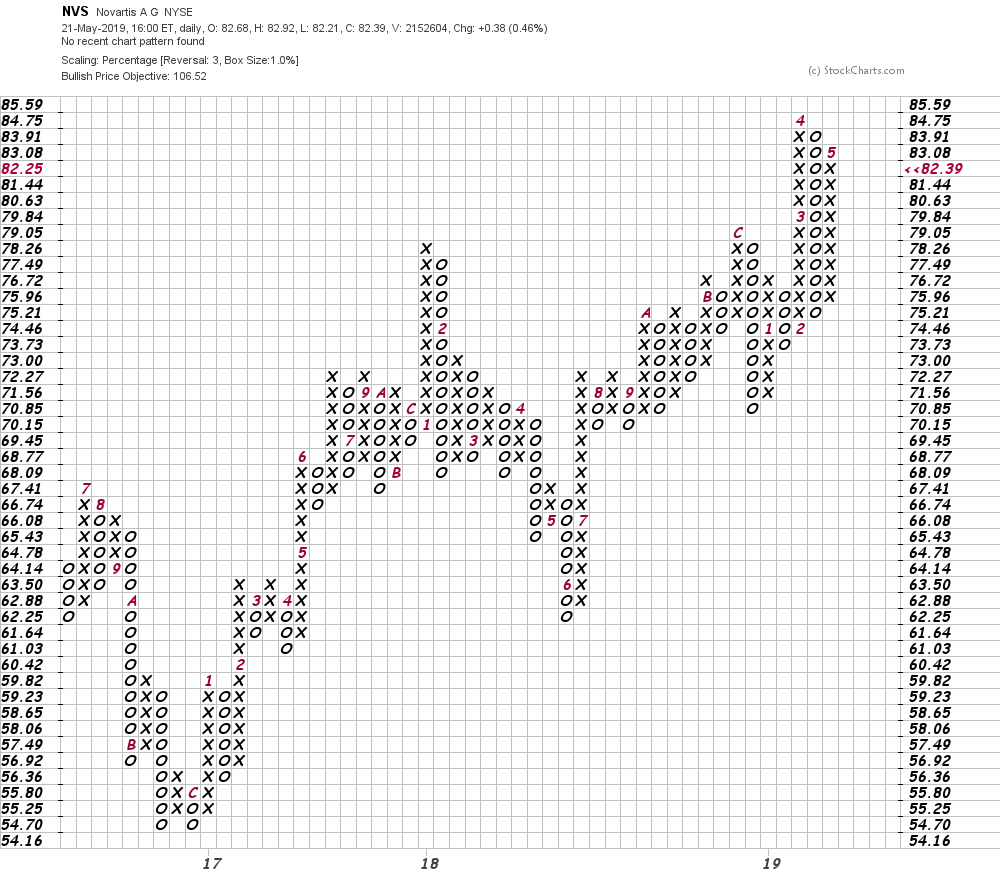 Bottom line strategy: The frequent price corrections on NVS make it difficult to hold and we never know when a correction is going to be the start of a sustained decline. If you own it or want to buy it you should not risk much below the rising 200-day moving average line.

Get an email alert each time I write an article for Real Money. Click the "+Follow" next to my byline to this article.
TAGS: Investing | Stocks | Technical Analysis | Trading | Pharmaceuticals | Mad Money | Executive Interview