"The only Chinese stock I'm recommending is Alibaba (BABA) ," commented Jim Cramer to one caller during the 'Lightning Round' of  Mad Money Tuesday night. Let's check on the charts and indicators of Alibaba Group Holding Ltd., or BABA for short, to see if we can count on the recent uptrend to continue.

In this daily bar chart of BABA, below, we can see that prices started a strong advance in early October. Prices broke out over the highs of September and the slope of the 50-day moving average line turned positive and moved up from the rising 200-day moving average line. It looks like the uptrend accelerated when prices moved above the early May high at $195.
The daily On-Balance-Volume (OBV) line started a strong advance in early June and its rise tells us that buyers of BABA have been more aggressive for the past seven months - despite U.S./China trade tensions.
The Moving Average Convergence Divergence (MACD) moved above the zero line in late October for an outright go long signal which continued into the end of the year. The MACD oscillator has crossed to a take profits sell signal but it looks like that signal could be reversed in the near future.

In this weekly bar chart of BABA, below, we can see that prices have broken out over the highs of 2018 when it moved above $210 last month. Prices are above the rising 40-week moving average line so we know from math that the longer-term trend is positive.
The weekly OBV line has been strong from June and stands at a new all-time high along with prices.
The MACD oscillator turned bullish in September and shows no sign of wavering.

In this Point and Figure chart of BABA, below, we used a different method of arranging the price action. The software allows for the plotting of a dynamic average true range and that has generated a potential upside price target of $316. 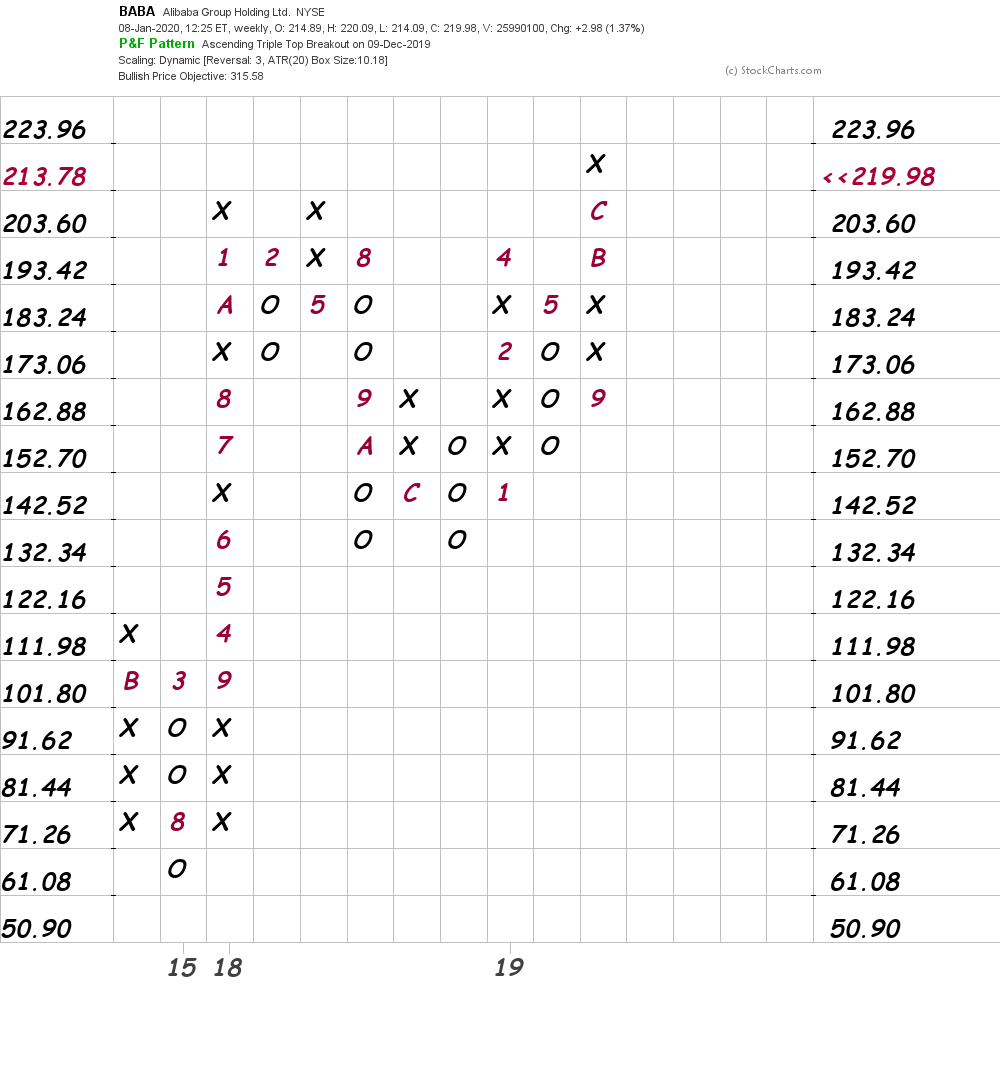 Bottom line strategy: Despite some discussion in the media that the Chinese economy is slowing, the charts of BABA look strong. Traders could try to buy a dip towards $215 risking a close below $205. The $300-$315 area is our longer-term price target.
Get an email alert each time I write an article for Real Money. Click the "+Follow" next to my byline to this article.
TAGS: Investing | Stocks | Technical Analysis | Trading | Retail | E-Commerce | China | Mad Money | Consumer Discretionary | Global Equity