Del Rio sounded off against the State of Florida's decision to continue their fight against vaccination mandates. He said he's dumbfounded by their decision to appeal a recent court decision allowing Norwegian to require everyone on board to be fully vaccinated.

Del Rio said they have a strict "no jab, no job" policy with their staff and crew and they will not accept any passenger, including kids under 12, who are not yet vaccinated.

Norwegian has been hit with unprecedented hardships, Del Rio continued. The company was completely shut down for over 500 days, he said, and generated zero revenue. Florida is the only place in the world where Norwegian is not able to mandate vaccinations.

"We need leadership in this country or COVID is going to go on forever," Del Rio said in frustration. Norwegian hopes to return to full operations by April, 2022.

Let's check the charts to see how they are operating.

In this daily bar chart of NCLH, below, we can see that prices declined from June to July before a bounce and a successful retest in early August. Prices are trading below the declining 50-day moving average line and just below the rising 200-day line.

The On-Balance-Volume (OBV) line shows weakness in June and July but appears to be firming in August so far. A return to aggressive buying would be a good sign.

The Moving Average Convergence Divergence (MACD) oscillator has turned upwards for a cover shorts buy signal but remains below the zero line and an outright buy signal.

In this weekly Japanese candlestick chart of NCLH, below, we can see a mostly positive picture. Prices made a good recovery from their March 2020 lows but they corrected lower from early June. Prices are just below the 40-week moving average line.

The weekly OBV line is bullish and remained strong even though prices weakened. The MACD oscillator is just slightly above the zero line and narrowing towards a new buy signal.

In this daily Point and Figure chart of NCLH, below, we can see a potential downside price target in the $11 area. Strength above $34 might be needed to turn this chart bullish. 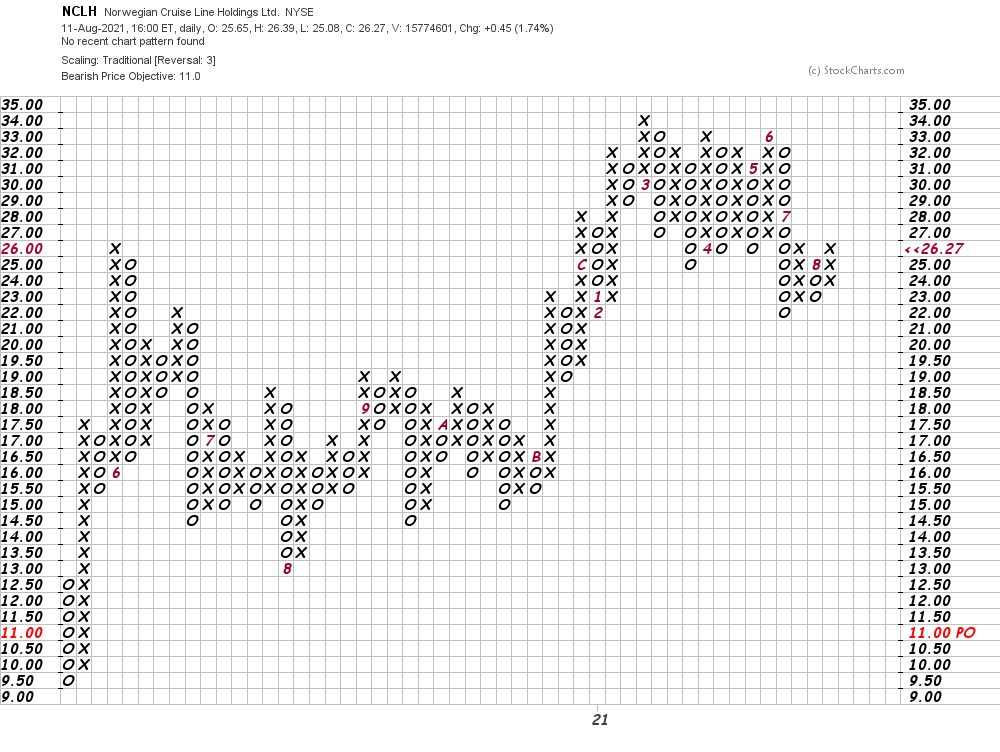 In this weekly close only Point and Figure chart of NCLH, below, we can see a downside price target of $15. Better than the target on the daily chart (above).

Bottom line strategy: The price of NCLH corrected in June and July but it doesn't look like the weakness is over just yet. NCLH probably needs more sideways price action before renewed gains. The downside price targets on the Point and Figure charts are not helping.

Get an email alert each time I write an article for Real Money. Click the "+Follow" next to my byline to this article.
TAGS: Investing | Stocks | Technical Analysis | Trading | Resorts and Hotels | Mad Money | Executive Interview