Several weeks back, I traveled to Las Vegas for the first time. Not a real prince of the nightlife, I had never had the urge to go. For me, vacation is all about beaches, national parks, and Civil War battlefields. My wife, however, had always wanted to go to Vegas. So, it is that I relented, and off we went. We stayed at Caesars Palace Hotel & Casino. While, I am certainly not one for the after hours glitz of such an active city (though I grew up in NY), there was much to like about that particular resort, between the pools and the casino itself.

One thing did bother me though. As an adolescent, I had always been a fan of Evel Knievel. I asked around. The bellhops, the taxi drivers, the front desk. I wanted to know where exactly Knievel has made the famous jump where he broke over 40 bones upon his missed landing. Nobody knew what I was talking about, and the property is so much more built up since 1967, it's hard to picture just from the grainy YouTube video.

Well, that's my story. It's also why news of the deal between Eldorado Resorts (ERI) and Caesars Entertainment (CZR) caught my eye the way it did over the weekend.

This (Monday) morning, Eldorado Resorts confirmed that news. The firm had agreed to acquire the larger Caesars Entertainment in a stock and cash transaction that does come with some hair on it. ERI will purchase each of CZR's outstanding shares for $8.40 in cash plus 0.0899 share of ERI stock. Eldorado will in addition, assume $8.8 billion worth of Caesars' debt. After all of that, ERI shareholders will control 51% of the new firm, while CZR shareholders 49%.

As part of this deal, Eldorado will turn and sell the land and real estate associated assets of three Harrah's resort hotels (Atlantic City, Laughlin, and New Orleans) to Vici Properties (VICI) . VICI will then modify existing lease agreements with Caesars. Between the sales and these lease modifications, the VICI side of the deal produces about $3.2 billion in cash that will in turn be used to help fund the merger between ERI and CZR.

Caesars operates 50 casinos in 13 states and five countries. Eldorado, not a player in Las Vegas, operates roughly 25 properties. The merged company will retain the Caesars brand name, and will trade at the Nasdaq Market Site. There will be 11 seats on the new firm's board, six will come from the Eldorado side, five from Caesars.

The real victor, after all is said and done, might be activist investor Carl Icahn, who increased his stake in Caesars to 17.75% earlier this year, gaining control over three board seats, and had pushed for both a change in leadership as well as a sale or merger. Though Caesars is the larger firm by far, Eldorado is the one of the two that has been experiencing a far faster pace of earnings growth.

Do I Get Involved?

Honestly, I don't think there is any rush. 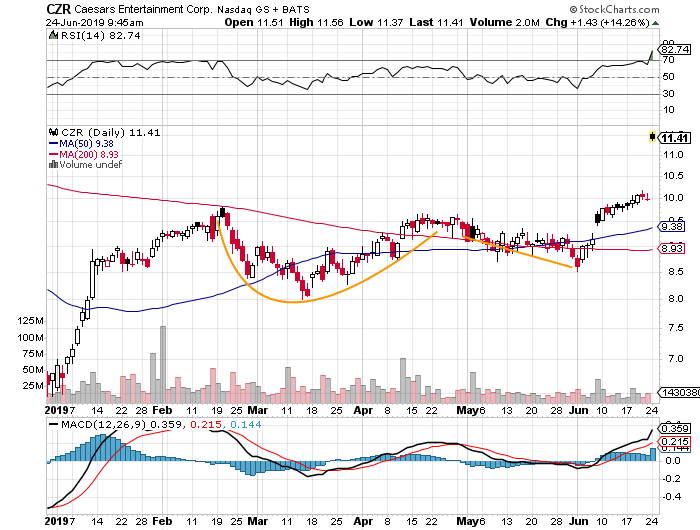 One easily sees the shares of Caesars breaking out of a saucer with handle pattern. That was, in my opinion, speculative buying ahead of the deal which had been rumored for a while. This ship has sailed. 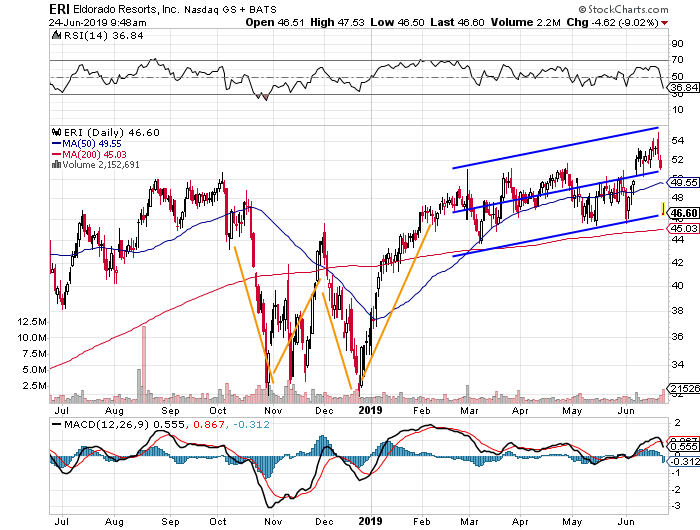 If I am going to tie up money in this deal, it would be only at a significant discount, and only from the ERI side. The shares, as you can see, broke out that double bottom in late 2018 very nicely, and have traded in a range ever since. Upon this news, the shares have threatened to break below the lower bond of this range. My thought? Maybe a small entry at the 200 day SMA, which is right around the $45 level. It if holds, it's a trade, if not then we start looking at Fib levels for direction on where to add. Either way, the vacation was probably better than the stocks.

Get an email alert each time I write an article for Real Money. Click the "+Follow" next to my byline to this article.
TAGS: Investing | Markets | Stocks | Technical Analysis | Trading | Gaming | Stock of the Day