Surprise! That's how I took the news. What news? The news that highly respected and highly followed JP Morgan (JPM) analyst Stephen Tusa had softened his stance significantly on General Electric (GE) . Don't get me wrong, it does not read like Tusa loves the stock, the way I see it, he's no longer in perma-bear territory. Now, you all know that I have traded this name in the past, and have largely had better success in trading GE options than in trading the shares themselves. That said, following Tusa's lead in this name has made/saved me money, and for the most part, diverging from Tusa's opinion when I have, has not worked all that well.

That's a quote from Tusa's note to clients. What Stephen Tusa did was upgrade GE from "Underweight" to "Neutral", while taking his famous $5 price target up to a still well below the last sale $8. Tusa acknowledges improved sentiment specific to this name, not just across the realm of investors, but really across the analyst community. Tusa also mentions the firm's better than expected free cash flow for 2019 that brought with it "am improved 2020 outlook."

I think that is still a tough long, fundamentally, but given the risk/reward proposition for the name, perhaps quite worthy of initiation as a speculative play. I'll try to explain. The Industrial side of the business is expected to grow sales by low single digits this year. Renewable Energy has been growing slowly. Power has not been a growing business.

There are two distinct caveats when one considers future performance. The firm's estimates for 2020 were made with the idea that Boeing (BA) gets the 737-Max back into service sometime around mid-year. Now, in the era of Covid-19, what if, even should that timeline run smoothly, due to a lack of demand for air travel, the rush to purchase that aircraft does not meet expectations, or back orders are delayed by the purchasers?

What about the bio-pharma business that is to be sold to CEO Larry Culp's old firm Danaher (DHR) ? The plan was to close on this deal sometime in the first quarter after already having been pushed back from Q4 2019. Approval for the sale had been won back in December from the European Union contingent that Danaher sell five competitive businesses. Last month, the South Korea Fair Trade Commission approved the deal, contingent that DHR sell as many as eight bio-processing product assets. Does this mean that the sale does not come off? No. Does this mean that the sale may come off with a little hair on it? Maybe. This unit has been a winner for GE, posting $1.5 billion in profit (14% of the whole for the Industrial segment) for 2019 on $5.2 billion in revenue. The sale however, does permit the firm to carry on with the continuance of correcting other issues that have plagued the firm, but still they are selling a producing business. 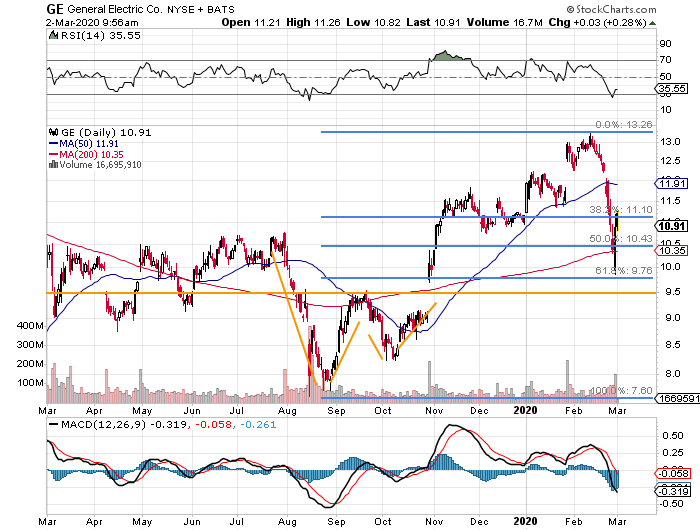 One can see in hindsight that the shares broke out of a 9.50 pivot created by a "double bottom" pattern. That run peaked close to 13.25, and as the impacts of the Covid-19 virus have infected the marketplace, the shares retraced close to precisely 61.8% of the bottom to top move before finding support. I did not recognize these moves in real-time for you, but this is textbook stuff.

I would not take an equity stake without messing around with net basis through the sale of what look to me to be well placed options mean to force profit taking, and/or adding at advantageous discounts. I do not believe there is a rush to buy. You can think about this. The firm reports in late April.

Get an email alert each time I write an article for Real Money. Click the "+Follow" next to my byline to this article.
TAGS: Investing | Options | Stocks | Technical Analysis | Trading | Industrials | Analyst Actions | Stock of the Day