You Deserve a Break Today

I have probably told you before. I worked at my local McDonald's (MCD) during high school. This was one of my favorite jobs that I ever had. I used to work at the Barclay's Bank branch on the same block before school, go the school, and then - thanks to a very special nun who used to look the other way when I cut last class - return to work at the Micky Dee's in the afternoon. That McDonald's was a special place. We had sports teams that played softball, football and roller hockey against other McDonald's teams in the New York City borough of Queens, and we even got into a few scuffles with the drug dealers at closing time when we had to kick them out of the bathrooms. You might call that crazy. I called it fun.

One hot summer day (I used to work at McDonald's full time during breaks from school), the store's air conditioner broke. The owner looked at me, and asked if I thought I could fix the air conditioner. I had no clue, but I fixed a lot of things around the store, so I said I'd give it a go. The internet was still more than 25 years in the future, so this was just a teenager, a tool box, and a willingness to try anything. Up on the roof I went. In many, many pieces I left this gigantic industrial sized air conditioner. In my aggressiveness, I may have exaggerated just how handy I was. That air conditioner would now cost the owner a bundle, and I may or may not have been suspended from working at the store for a little while.

McDonald's went to the tape with the firm's fiscal third-quarter performance on Tuesday morning. The results were not fantastic. Adjusted Q3 EPS printed at $2.11, about a dime below expectations on revenue of $5.43 billion. The sales number was good enough for a year over year increase of 1.1%, but also fell below what Wall Street had modeled. Was the quarter really that bad? I see the negative reaction in the share price, down a rough 3% in mid-Tuesday morning trade, but there certainly are bright spots. Let's dig in.

In the fast food business, or really in any consumer oriented business, comparable sales are the focus, at least for me. Global comp sales were 5.9% higher for the quarter, which is indeed better than the 5.5% that the industry was looking for, but off of Q2's torrid 6.2% pace. Broken down further, this gets even more interesting. Comp sales withing the U.S. grew only 4.8%., that was below consensus of 5.2%, but the U.S. only accounts for a bit more than a third of the global business.

This means that the problem, is really here in the U.S. The firm acknowledges the use of national and local promotions, while renovating stores and upgrading technology used within those stores. This may have impacted profit to some degree at least domestically. Keep in mind though, that even at 4.8% comp growth, overall domestic market-share likely still increased. This is despite the chicken sandwich wars, and all of the hoopla around plant-based meat substitutes offered at the locations of several competitors.

I am flat this name, as Wendy's (WEN) has been my pick in this space for a little while, and I am long that name. Still, I am not sure that I see a need to panic if one is in this stock. The shares may be lower, but still within the framework of visible support. 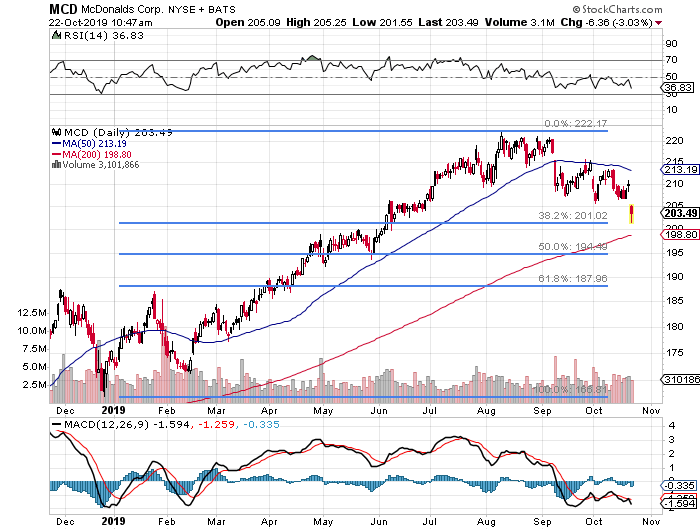 Investors will note that so far this name has held at a 38.2% retracement of the December through August rally, which is $201. Investors will also note the 200 day SMA at $199. Suffice to say that there is some support at the current level. This area breaks and maybe there is more to worry about. For now, the spot may be worthy of some risk.

A trader only interested in accumulating the shares on a discount, and able to risk being paid to expose him or herself to equity risk for a price could...

Note 1: The trader would realize $385 in premiums up front in exchange for possible equity exposure at $195 and $190 in December should the shares crater. Best case: the shares go higher, and the trader pockets the premiums.