Is there any downside left to be had? In the small-cap, momentum, and growth names, I'm not so sure. Seeing a name like Skillz (SKLZ) , one of my worst performers, drop from $45 to under $13 without a care in the world is amazing. Admittedly, the run up into the $40s priced in way too much optimism. I was long out of the name before that move. Unfortunately, as the stock approached the teens, I found interest again... the high teens. And while it is no longer in the teens, it's not because we've bounced, but because demand has withered, and we're probing sub $13 to search for buying interest. Yet another Cathie Wood name taken to the woodshed.

That's just one of many small names that look that way. The irrational run-up from 2020 is being met with an equally overdone drop in 2021. Many names will likely find a home somewhere in between.

That leads me to wonder what names could breakdown if rotations continue. Large names have held the indexes in place for the most part, but I'm seeing some concerns in those charts. Today, it's a quick look at Micron Tech (MU) . 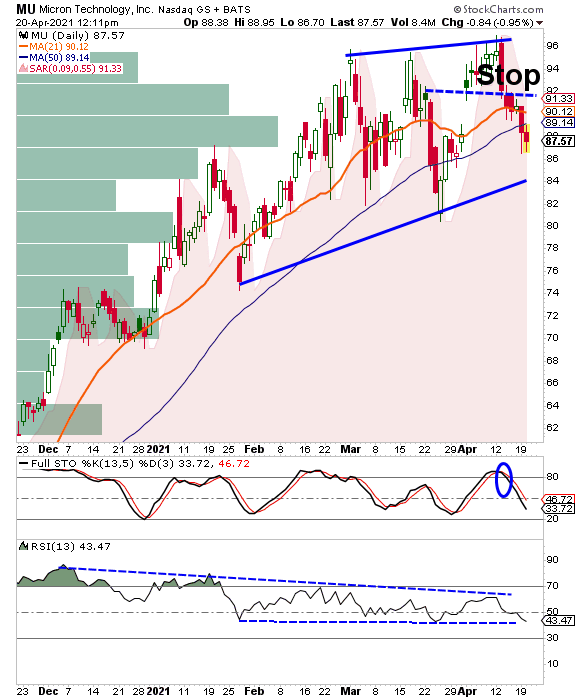 While Micron has been an ultimate boom or bust cyclical stock, that has waned over the past 18 months. It's found consistency. One piece of consistency I see in the daily setup is this series of lower highs on the Relative Strength Index (RSI). That does not match the price action, but at some point the bearish divergence will likely weigh on price. Additionally, we have an ugly bearish crossover in the Full Stochastics. While that may be somewhat reflective in price action, I don't expect it to bottom until MU sees $84.

The bigger challenge for bulls comes if $84 fails. If that happen, we could be staring at another 10% lower before the stock finds support. Should the stock close above $92, I wouldn't want to remain short. The bulls should have a path to $96, possibly $100. That's where I would consider getting long, a close above $92.

It's tough to see what's going to end the destruction in the small-cap growth and speculative part of the market, but when it happens, anticipate rotation away from large-cap names rather than both sides of the market working together harmoniously for an upside push.

Get an email alert each time I write an article for Real Money. Click the "+Follow" next to my byline to this article.
TAGS: Investing | Stocks | Technical Analysis | Trading | Semiconductors & Semiconductor Equipment | Technology