It's been a tough year for Nordstrom (JWN) . The shares closed at $26.54 on Wednesday evening. The same shares traded as high as $67.75 last November. That's 60.8% depreciation for those keeping score. The firm had suffered two consecutive quarters of declining earnings growth, on three consecutive quarters of contracting revenue. The bell rang. The firm was about to release second quarter performance. Perhaps, the table had been set.

The next bell would ring on Thursday morning in New York. Since that last toll of the bell prior, Nordstrom reported Q2 EPS of $0.90, a beat, on revenue of $3.78 billion, a miss and a fourth consecutive quarter of contraction. Traders bought the shares in response. I repeat... traders bought the shares overnight, and those shares opened at gains of 10% to 11% on Thursday morning. What is going on behind the numbers is what is at least starting to impress. I have never tried to turn a battleship on a dime. I imagine evolving the business model for formerly much more successful department store chains must be nearly as difficult.

There is still plenty of ugly out there. Full-price sales dropped to the tune of 6.5%, Off-Price sales were dinged for another 1.9%. There was growth in digital at +4%. Given that when one thinks of making purchases on-line, they likely check Amazon (AMZN) , maybe Walmart (WMT) , maybe Target (TGT) , but probably not Nordstrom all that much. This 4% growth brings the e-commerce side of all sales for the firm up to 30%. That tells me that this chain has not lost the loyal customer. They must have built something sustainable.

Because this is a positive, let's expand on what's working. The firm's loyalty program now has 12 million active customers, that's up 12% in 12 months. That reminds this old dog of another underdog on another day, another number 12. Joe Willie. (Sorry, I grew up in Queens) These 12 million active customers now comprise 64% of the firm's total sales.

The firm's local market strategy also seems to be gaining traction. The idea is to gain market share through increased customer engagement through both services and better inventory management. This, the firm has contributed to an uptick in clients buying on-line, and picking up in stores in the Los Angeles market where it has already been implemented. This strategy will be expanded to New York City in late October ahead of the holiday season.

While the firm did execute on several levels including improved efficiencies on the expense side, sales were still toward the lower end of the previously expected range. On top of that, as already covered here, the quality of those sales is still mired in a state of deterioration. That forced gross profit down to 34.5% of net sales, though this can be at least partially explained through the ongoing effort to deleverage occupancy expenses.

In response, the firm has been forced to cut forward guidance across several levels. For the full year, the firm guides revenue growth to "approximately" -2% from flat to -2%. The firm also cut the higher end of the previous range of expectations for EBIT, EBIT margin, and earnings per diluted share. The latter now stands at $3.25-$3.50. 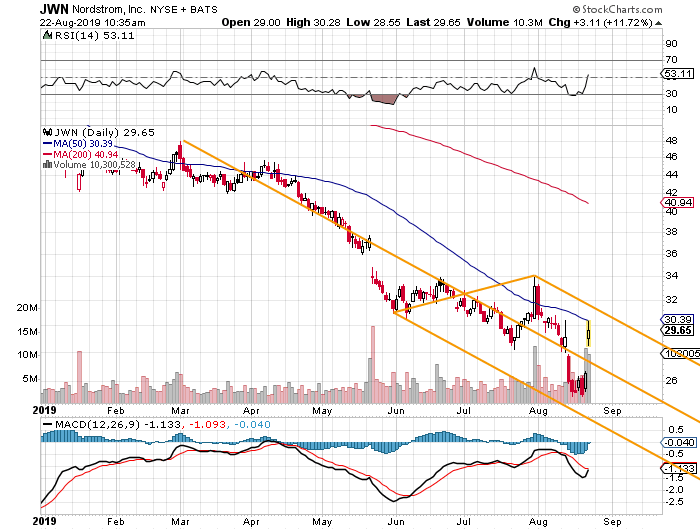 I like to see the sharp rise on Thursday that we now see in Relative Strength. I like that the daily MACD threatens to crossover, though all thee EMA's (12, 26, and nine day) are still clearly running negative. I like that the shares have broken back into the upper chamber of the downward sloping Pitchfork. I do not like that the shares met sharp resistance as soon as the 50 day SMA had been approached.

No, I will not buy shares of JWN on this morning's rally. I like the obvious effort being made by management. I do think that they realize that they are in a fight, and are being aggressive. The truth is that the retail space remains troubled. Department stores and the mall remain the epicenter of the issue. I remain long Kohl's (KSS) , and I really do not need both of these on my book. Kohl's, I believe to be better positioned, both in creating alliances as in regards to the balance sheet.

The third quarter is expected to print as a third consecutive quarter pf negative earnings growth for the S&P 500 in aggregate. While this name may not present much in the way of risk, it presents enough risk in an uncertain environment to prevent me from choosing to reduce the guaranteed 0% return offered by my current cash position, or to reduce the opportunity cost involved with creating a new portfolio allocation.

Worth watching. For now, there are better fish. Target, Walmart and Home Depot (HD) are all in my opinion, better fish.