Qualcomm (QCOM) reported fiscal fourth quarter financial results on Wednesday evening. It is safe to say that Qualcomm beat expectations. Is it also safe to say that the results were good to very good? The shares are trading sharply higher in the early going. I am not so easily convinced. That said, I am not always right. Let's dig in.

The firm posted adjusted EPS of $0.78 (-12% y/y) on revenue of $4.81 billion (-17% y/y) even if both of these headline expectations did beat the street. Going into the firm's business segments, there are two that investors need to cognizant of. There is what the firm refers to as QCT (Qualcomm CDMA Technologies), and QTL (Qualcomm Technology Licensing). QCT is the firm's semiconductor business and is easily the larger of the two in terms of revenue.

The QCT business posted revenue of $3.611 billion (-22% y/y), which was slightly above consensus. However, the unit only contributed $499 million (-37% y/y) toward earnings before taxes. The QTL business would obviously be a much higher margin business. That group printed sales of $1.158 billion (+4% y/y), but still contributed $792 million (+11% y/y) toward the earnings before taxes. Notice where the plus and minus signs are here? I think that tells the story, but what story does it tell?

The company makes plain that the QTL revenue print includes royalty revenue from Apple (AAPL) , as well as a $100 million contribution from an interim agreement with Huawei. Let's not forget that Apple purchased Intel's (INTC) base-band assets, and as for Huawei... that may or may not be there going forward.

Qualcomm expects current quarter revenue to land in between $4.4 billion and $5.2 billion. Industry consensus is just above $4.8 billion. This guidance does not include any royalty revenue from Chinese telecom/smart phone/5G giant Huawei. That situation resolves for the better, and so obviously will Qualcomm's performance. The firm also guides adjusted Q1 EPS toward $0.80 to $0.90, the mid-point well above consensus view of $0.81.

The strength of the guidance emanates from the already mentioned high margin licensing business. Qualcomm is guiding Q1 QTL revenue toward $1.3 billion to $1.5 billion with Apple still a healthy component. This would be 12.2% sequential growth at the lower, more conservative end of the range. The firm does however expect to see continued weakness of total chip shipments. Going beyond the fourth quarter, the firm sees these trends reversing somewhat in 2020, as licensing revenue may level off, and demand for 5G smart phones increases.

We can not overlook that Qualcomm is generous with shareholders. Not only does the annual dividend of $2.48 yield just under 3%, but the firm bought back 3.9 million shares throughout the quarter for a cool $300 million. According to my Real Money colleague Eric Jhonsa, this would leave a robust $6.8 billion worth of room in the current repurchase authorization.

Though complicated, the results are solid, as is guidance. The market has already told us that. Do I need to buy some Qualcomm shares on this pop? I have enough exposure to the space. No I do not need to pay a premium for these shares, and I certainly would not short a name like this with U.S./China trade headlines evolving on an every day basis. 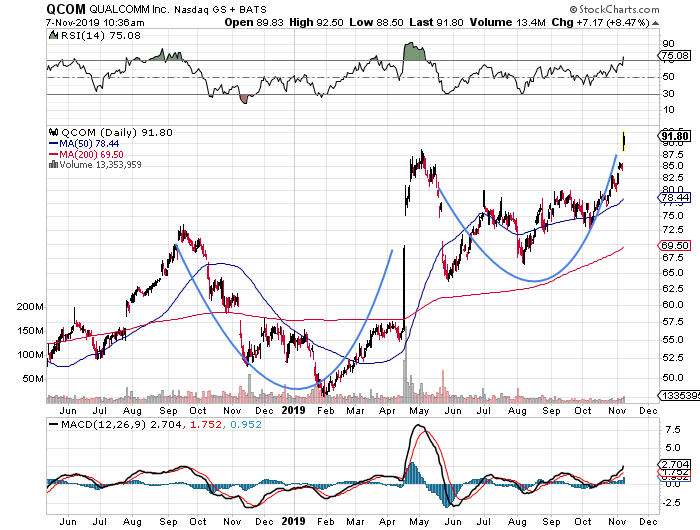 Investors will note the completion of a forming cup this morning with a nice gap higher. Investors will also notice that this stock completed a similar looking cup with an upward gap back in April related to Apple news and earnings. Remember that most times, gaps will fill, and that April gap did fill in May. If an investor were dead set committed to purchasing these shares, my inclination would be to wait for such a selloff.

Where? The 50 day SMA now stands at $78.44. Stiff resistance for this name repelled many tests throughout the summer. That spot was an even $80.

Note: The trader in the example would realize an up front payment of $280. Should the shares not come in to these levels, by mid-January, that's spending money. In exchange, the trader has opened him or herself up to equity risk at a discount. Worst case? The trader ends up long 200 shares of QCOM in January at a net basis of $79.85 with the shares trading below $80.

Get an email alert each time I write an article for Real Money. Click the "+Follow" next to my byline to this article.
TAGS: Earnings | Investing | Options | Stocks | Technical Analysis | Trading | Technology | Stock of the Day

The S&P 500 still appears to be overvalued.

CrowdStrike Is Pointed Higher but Could Experience Some Profit Taking

The price action tells me that traders are anticipating a strong earnings report Tuesday.

Does Zoom Have More Upside Room?

The company is set to report earnings as the stock soars higher.

2 Overlooked Small-Cap Names That Should Perk Up

The prospects of dating site operator Spark Networks and chemical producer Olin Corp. should improve as the economy opens back up.

Let's hope that the violence subsides, the valid voices of peaceful protesters are heard, and the lack of social distancing protocols does not lead to a resurgence in the spread of the virus.