During Monday's Lightning Round segment of Mad Money, one caller asked Jim Cramer about NIO Ltd  (NIO) : "This one needs to come down. These stocks are too expensive," said Cramer referring to the electric vehicle (EV) space.

We looked at NIO back on February 18 and recommended, "Continue to be prepared for lower prices either by selling here or on a close sell stop -- the Point and Figure chart suggests $49, but a decline to the bottom end of support around $40 could also happen."

Let's pay another visit to the charts.
In this daily bar chart of NIO, below, we can see that our February 17 forecast worked out nicely. Now that our $40 price target was reached and overshot, another review is needed. We can see that prices dipped close to the rising 200-day moving average line in early March and again in late March. The slope of the 200-day line is positive but the 50-day average line has a negative slope.
The On-Balance-Volume (OBV) line shows a decline from the middle of January to late March telling us that sellers of NIO have been more aggressive. The Moving Average Convergence Divergence (MACD) oscillator gave a sell signal in late February and two cover shorts buy signals in March.

In this weekly Japanese candlestick chart of NIO, below, we see a mixed picture. We can see that NIO has tested its rising 40-week moving average line. Prices have bounced off of the rising line but not with a lot of "vigor" and the trading volume is not showing an increase by traders convinced the pullback is over.
The weekly OBV line still shows weakness from November, and the MACD oscillator is still pointed down from a take profit sell signal.

In this daily Point and Figure chart of NIO, below, we can see that the software is projecting the $25 area as a potential downside price target. 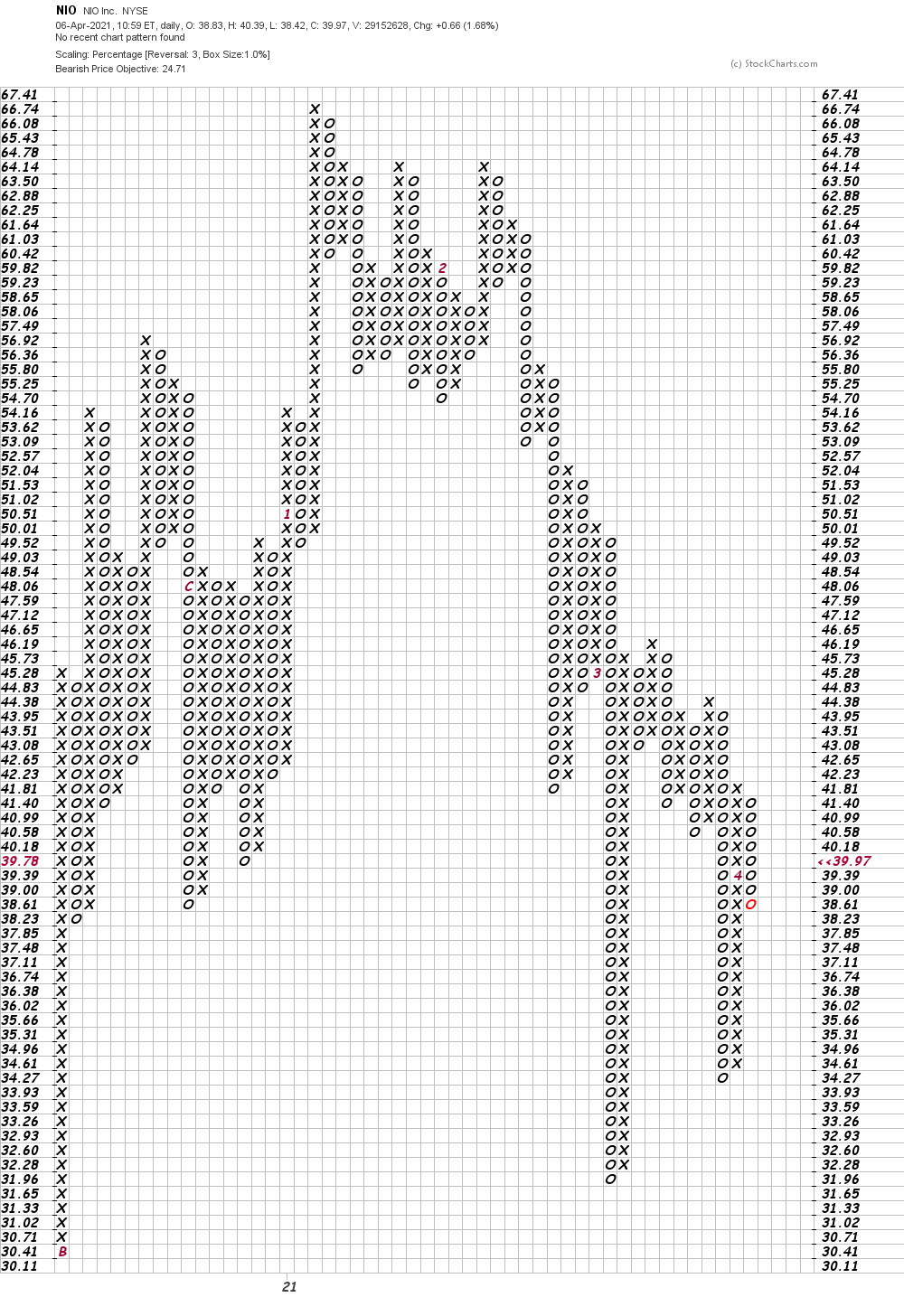 Bottom line strategy: We have been successful so far avoiding the long side of NIO. Prices have held the $35 area twice in March so that is the level for the bulls to defend. A break of this support zone could open the way to declines in the $25 area, according to the Point and Figure chart.
Get an email alert each time I write an article for Real Money. Click the "+Follow" next to my byline to this article.
TAGS: Investing | Markets | Stocks | Technical Analysis | Trading | Automotive | China | Mad Money | Electric Vehicles