Russell assured investors that despite reports to the contrary, Nikola has "several trucks that work", and their prototyping and testing continues.

Turning to the company's business outlook, Russell offered no comment on Nikola's partnership with General Motors  (GM) , which has not been finalized since fraud allegations surfaced. He also did not comment on the prospects of fueling station partners.

Finally, Cramer asked about share lockup periods that expire next week. Russell was confident that as the company hits their milestones, their large shareholders will continue to hold their shares.

We looked at the charts of NKLA on Tuesday and gave this advice: "Seasoned market observers (both technical and fundamental) recognize situations where traders rush into the "next new thing." This kind of buying that only focuses on the potential rewards and ignores the risks can have an unpleasant ending. Lasting "new things" tend to take a while to develop but the rally from a small base makes me nervous. Use a $25 sell stop on any new longs."

In this updated daily Japanese candlestick chart of NKLA, below, we can see that Tuesday's candle pattern could be a high-wave candle. This pattern has large upper and lower shadows and tends to have a relatively small real body to make a possible top reversal.

The On-Balance-Volume (OBV) line was strong yesterday as prices closed higher on good turnover. The math behind the OBV line assigns all the volume as positive volume when the stock closes even one cent higher.

In this updated daily Point and Figure chart of NKLA, below, we can see an ambitious price target of $74 and we can also see some chart resistance nearby from the volume by price bars on the left scale. 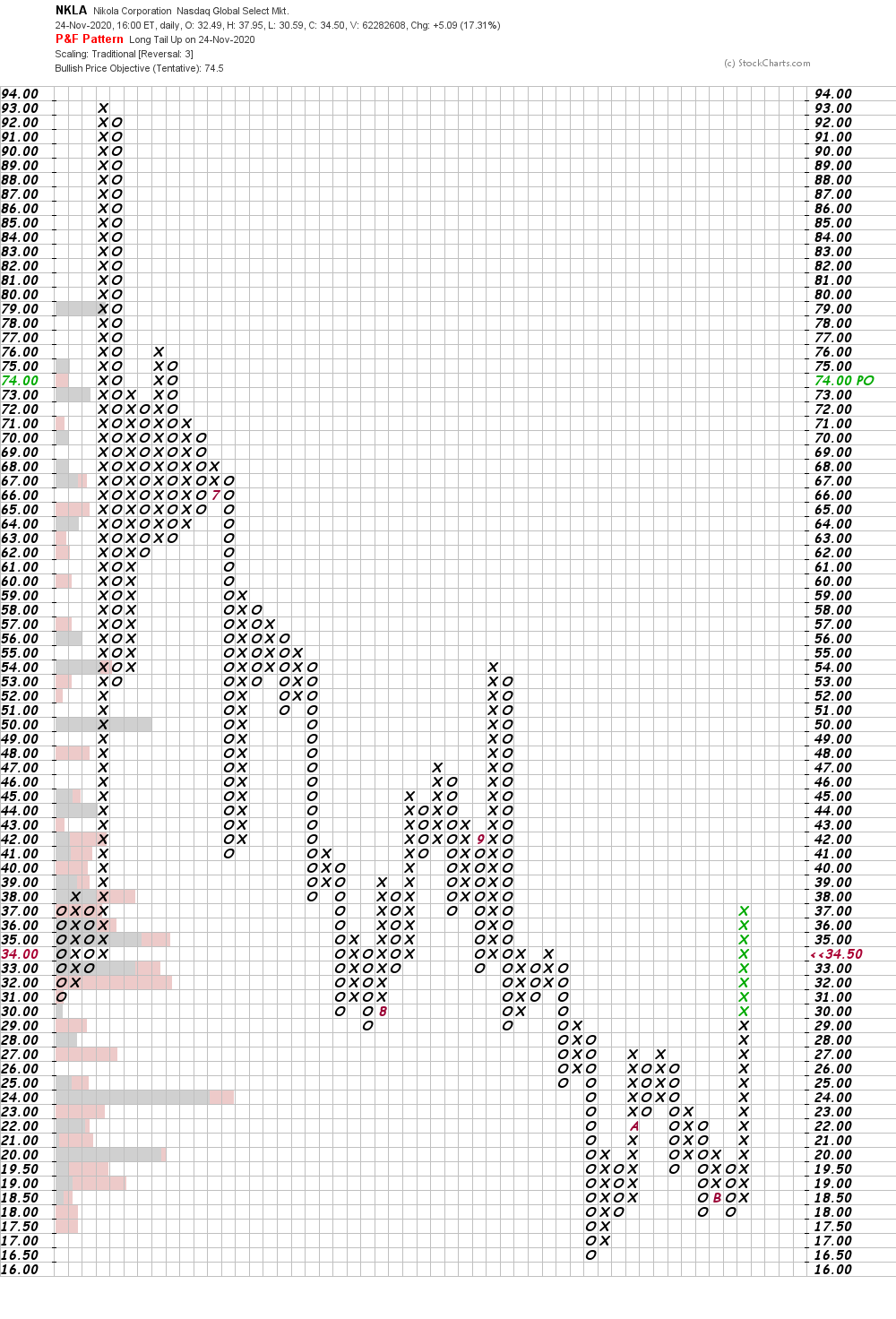 In this last chart of NKLA, below, we use hourly data to drill down on the intraday price action. Notice the upper shadow above $36 followed by the spinning tops and a doji. These kinds of candles can be reversals on a daily chart and may not be significant on an hourly chart.

The chart shows that volume swelled on the rally and that tells me that recent longs have a high average purchase price. A pullback, even a shallow one, could be a problem.

Bottom line strategy: CEOs tend to be positive about their company and are more cheerleaders than independent analysts. Traders who are long NKLA should raise stop protection to $28 now from $25 recommended on Tuesday.

Get an email alert each time I write an article for Real Money. Click the "+Follow" next to my byline to this article.
TAGS: Investing | Stocks | Technical Analysis | Trading | Automotive | Mad Money | Executive Interview | Electric Vehicles

Why we ever allowed Chinese businesses to raise capital, our capital, on our shores, is beyond me.

Conditions for 'sell the news' action is good, but is it too obvious to actually work?

The reopening stocks did well on Monday, but the underlying statistics in the market are shaky.