Is it Memorex? Or is it real? Nikola (NKLA) is set to report in late February. There are eight sell-side analysts currently covering the name. Consensus view for adjusted EPS is running at a loss of $0.30 per share (range spanning $-0.42 to $-0.27) on revenue expected to land close to $2.6M. Yes, that's an "M". Analysts see the firm losing $0.87 per share this year, and even more... $1.02 next year. The poor numbers are basically the result of the firm overcoming the embarrassment of the Trevor Milton era, and the fact that they really haven't moved any product just yet. These negatives may be evolving in a positive way. Quickly.

This past Tuesday, Nikola confirmed that it has reached a resolution with the Securities and Exchange Commission to settle actions taken during the Milton era. Nikola will pay the SEC $125M over five installments starting prior to the end of 2021 and ending in 2023. Nikola will neither admit nor deny anything and is seeking reimbursement from Milton.

Wednesday (yesterday), Heniff Transportation Systems placed an order with Thompson Truck Centers (a member of the Nikola sales and services dealer network) to initially acquire 10 Tre BEV trucks. Upon the initial deployment of these 10 units, Heniff and Thompson have agreed to pursue the placement of an additional 90 trucks into the Heniff fleet.

Thursday (this) morning, Nikola reports that the firm has made its very first customer delivery of a Tre zero-emission truck to Total Transportation Services in Southern California. The firm is at last, on the scoreboard.

I am going to surprise you. The firm has a pretty nice balance sheet. The firm ended the September quarter with $587M in cash, equivalents and short-term investments, which comprises the lion's share of all current assets. Total assets amount to a little over $1B, which includes property, plants and equipment. Current liabilities add up to less than half of the firm's cash balance, while total liabilities (less equity) are barely larger than current liabilities. The firm has almost no debt on the books, and none on the balance sheet. The current ratio stands at close to 2.5.

Away from the balance sheet, as of the end of November, more than 15% of the firm's entire float is held in short positions, which I found interesting. Dan Ives, who is the only analyst I can find covering this name and who is rated at five stars at TipRanks, has a "hold" rating on NKLA, but with a $15 price target. The stock closed at $9.40 last night, but was trading above $13 at the time (November 8) that Ives set that price target. Obviously NKLA is moving quickly and higher this morning. 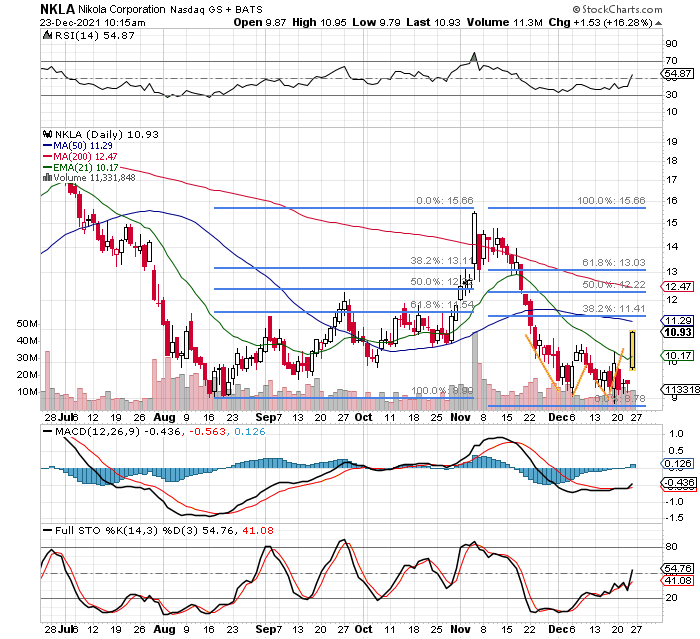 Interestingly, readers will see that NKLA suffered a 100 % retracement of the August through November rally as November wound into December. A 38.2% retracement of that selloff runs close to in-line with the stock's 50 day SMA ($11.29). This is where I see resistance as the shares break out of a smallish double-bottom with a $10.50 pivot. Do I invest here? This would not be my first choice in the EV space. I like Lucid (LCID) and Rivian (RIVN) better, and have traded in and out of LCID since going public.

The cream of the crop remains Tesla (TSLA) , that's obvious, and in my opinion, the challengers with the greatest mass potential remain legacy vehicle manufacturers Ford Motor (F) , and General Motors (GM) .

What I am telling you is that Nikola is purely speculative. Okay for day trading in my opinion, but not so far this morning as the action has literally been a one way street. The stars in this industry, if asked for my opinion, are Musk, and now Farley and Rawlinson.

Get an email alert each time I write an article for Real Money. Click the "+Follow" next to my byline to this article.
TAGS: Investing | Stocks | Technical Analysis | Trading | Automotive | Electric Vehicles