Seems like yesterday. Instead it was more like two weeks ago. Personally, I like writing. A lot. I just don't like writing about the same stock or company too often. Sometimes the story changes for a name though, so we take another look to see if maybe we need to adjust fire. Today, the morning after the firm released financial results for its fiscal second quarter, we take another look at Nike (NKE) .

On Thursday evening, Nike went to the tape with Q2 EPS of $0.70, a solid beat of expectations. The firm did this on revenue of $10.33 billion, also a beat, and good enough for annual growth of 10.2%. Those headlines read very well, yet the shares sold off. Let's explore.

Now, investors must remember that this stock like so many others has been trading at record levels. This does not make Nike special. Many stocks are behaving this way in line with the broader indices. Understand that when traders have large profits to protect, it will not take much to move them toward ringing the register.

So, there are some dents in the armor? There are, but they seem like small potatoes to me, at least relative to the level of corporate execution I see that all over this release. Revenue derived in North America grew 5% to $3.98 billion. Wall Street was looking for an even $4 billion. Revenue generated in the EMEA region (Europe, the Middle East, and Africa) increased by 10% to $2.54 billion, and lastly, revenue from what the firm refers to as Greater China screamed up 20% to $1.85 billion. If the people of China were going to snub U.S. corporations as a result of the trade war, we just have not seen that.

Digging deeper, footwear sales increased by 12%, apparel by 10%. Michael Jordan may have played in his last NBA game roughly 16 years ago, however his ongoing popularity is undeniable. The Jordan brand posted its first $1 billion quarter ever supported by new growth in women's and international sales.

Gross margin grew to 44% from 43.8% for the comparable quarter one year ago. The growth was attributable to higher selling prices as well as the better margins that the firm enjoys at Nike Direct where sales grew by 17%, and now amount to roughly 30% of revenue. The problem? The street was looking for 44.1% gross margin. The impact of tariffs on Chinese imports put at least some pressure on profitability, thus the very, very slight miss.

Some key items need to gather focus as Nike heads into 2020. First off, you'll recall that Nike is moving away from Amazon (AMZN) as an e-commerce partner and instead doubling down on its own operation as well as brick and mortar partners like Foot Locker (FL) and Dick's Sporting Goods (DKS) . Secondly, next month long time CEO Mark Parker is slated to step down from his post to be replaced by ServiceNow (NOW) CEO John Donahoe, who already holds a seat on Nike's board.

I gave you this trade idea in minimal lots...

This is what the chart I gave you then looks like now... 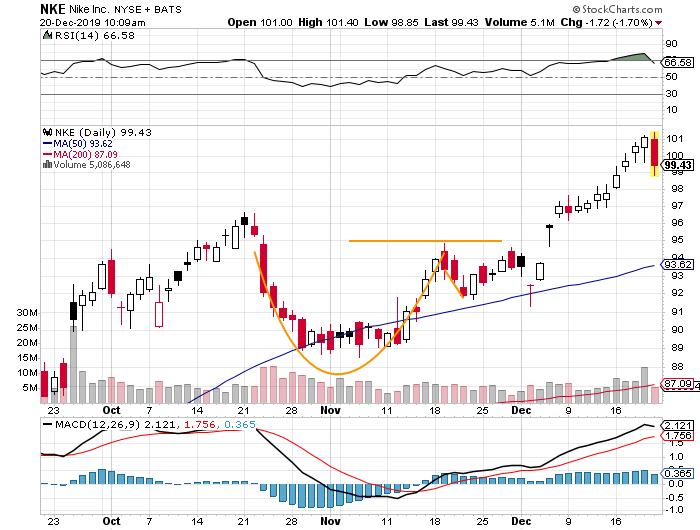 The trade idea was obviously a good one. If a reader followed this trade to the 'tee', and wanted to remain long the shares beyond Friday afternoon's expiration, that trader would need to buy back the December 20th $99 call. At 11 am ET on Friday, December 20th, that will run the trader roughly $0.80, bringing net basis for that trade up to $94.99. Psst... it's still a winner. If the trader wants out, they can just allow themselves to be called away later and pat themselves on the back for a 5% profit on the trade.

For those flat the name, but still thinking about it, there is nothing wrong with the stock in my opinion. I stand by my $114 target.

Get an email alert each time I write an article for Real Money. Click the "+Follow" next to my byline to this article.
TAGS: Investing | Options | Stocks | Technical Analysis | Trading | Apparel | Retail | Sports business | Stock of the Day