Athletic footwear, apparel and equipment giant Nike (NKE) released the firm's fiscal third quarter results on Monday evening. Those results were in general, better than had been expected. The stock has reacted accordingly. Let's dig in.

For the three month period ending February 28th, Nike posted GAAP EPS of $0.87 on revenue of $10.87B. These numbers beat consensus view for both the top and bottom lines, while amounting to earnings growth of -3.3% on revenue growth of 4.9%. Like I said, worse had been expected, or feared due to kinks in supply chains and Covid lockdowns in areas where Nike manufactures goods in Asia.

As far as what was sold across Nike branded products.

Concerning where sales are being made.

A lot of folks might not realize that with a dividend yield of just 0.94%, Nike has actually increased its dividend payouts for 20 consecutive years. For the quarter reported, Nike returned a rough $1.7B to shareholders. Dividend payments totaled $484M, which was up 12% year over year. In addition, the firm repurchased $1.2B worth of common stock for the three months, reflecting 8.1M shares retired. This is still part of Nike's four year $15B repurchase program that was authorized back in June of 2018.

Nike ended the quarter with a net cash position of $13.467B and inventories of $7.7B, leading to current assets of $26.962B. That was up 9% from one year ago. Current liabilities amounted to $8.818B, which is down 1% from a year back. This left Nike with a very healthy current ratio of 3.06. Total assets of $38.577B easily outweigh total liabilities less equity of $23.768B that included $9.418B in long-term debt. This balance sheet breezes through the Sarge test.

I can only find five sell-side analysts that are both rated at five stars by TipRanks and have opined on Nike since these earnings were released. There are quite a few analysts rated below five stars who have opined including a couple of well-known names, but I will stick with the highly rated for the purposes of this piece. Of the five, four analysts have either a "buy" or "buy equivalent" rating on NKE. The average target price across the four is $164.40 with a high of $185 (Randal Konik of Jefferies) and a low of $150 (Simeon Siegel of BMO Capital). Oddly enough, Siegel is one of the "buys". Paul Lejuez of Citigroup, who is the "hold" (neutral) among these five, has a target price of $157.

I'm impressed with the quarter's performance. I'll admit that. The firm did say during the call that the impact from China's lockdowns is unclear. I'll throw in that the war in Europe adds additional uncertainty. The firm tells listeners flat out that they are three months away from providing specific financial guidance for fiscal 2023. I take that as they need to see if China is going to rebound the way that they hope. If Nike is not sure, neither am I. 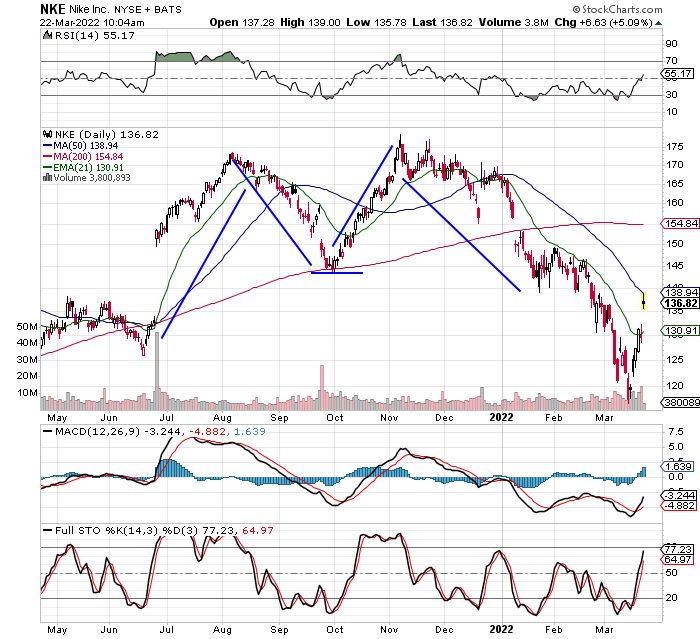 Obviously, Nike has suffered technically at the hands of this double top reversal pattern that produced a $144 downside pivot. The shares have absorbed that and are in the midst of a now significant rally. All three of my indicators (Relative Strength, Full Stochastics Oscillator, daily MACD) are now approaching a technically overbought condition.

In addition, the shares also approach their 50 day SMA ($139) this morning with an eye on the unfilled gap between $154 and $161 form early January, but also leave a gap in today's wake. I don't see anything wrong with buying a few shares of NKE given that the firm expects to be prepared to offer specific guidance in three months. I do believe however, that a better entry point might be had by waiting. I would rather wait close to Monday's high of $128 to buy on momentum as the stock takes that 50 day SMA than throw money at the equity in the mid to high $130's.

Those interested might think about writing the June 17th $130 NKE puts for about $5.10. If the stock takes off, that's still a 5-spot in your pocket. If you do end up getting tagged in June, it would be with a net basis below $125.

Get an email alert each time I write an article for Real Money. Click the "+Follow" next to my byline to this article.
TAGS: Dividends | Earnings | Investing | Stocks | Technical Analysis | Trading | Apparel | Retail | China